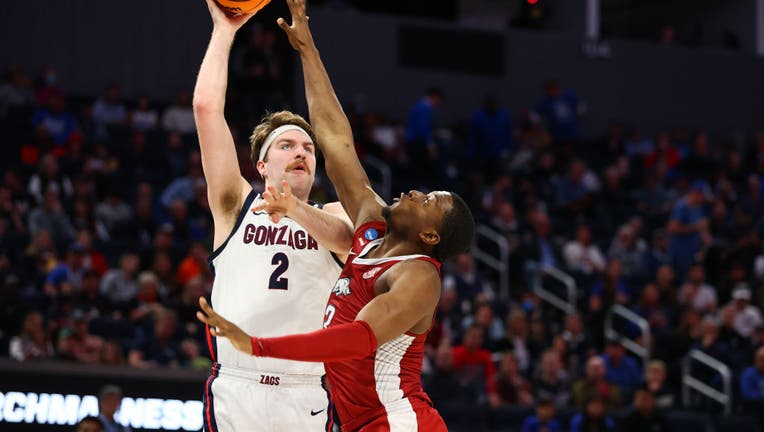 SAN FRANCISCO, CA - MARCH 24: Drew Timme (2) of the Gonzaga Bulldogs shoots against Trey Wade (3) of the Arkansas Razorbacks during the Sweet 16 round of the 2022 NCAA Mens Basketball Tournament held at Chase Center on March 24, 2022 in San Francisco

"One of the best decisions I have ever made was to come to Spokane and Gonzaga University to play basketball in front of Zag Nation," Timme wrote in a statement posted to his Twitter account. "I have had the privilege to play with and be supported by the best coaches, teammates, fans, friends and family anyone could ask for. I have forever been changed into a better person and basketball player because of that opportunity.

"The dream has always been to play professionally. After lots of thought and discussion, I will be putting my name in the NBA Draft.

Timme was the 2022 WCC Player of the Year. He averaged 18.4 points and 6.8 rebounds last season for the Bulldogs. The performance earned him second-team All-American honors along with teammate Chet Holmgren.

In his three seasons at Gonzaga, Timme scored 1,521 points with a career 61.9 field goal percentage. He scored 25 points with seven rebounds in the Bulldogs' Sweet Sixteen loss to the Arkansas Razorbacks.

Timme has until 9 p.m. PT on June 1 to withdraw from the NBA Draft and return to college depending on if he hires an agent.

"Thank you to all of those who have been a part of my journey so far," Timme continued. "A special thanks to coach (Mark) Few and the entire GU athletic staff. The love and support have made my years at GU some of the best I will ever experience!"