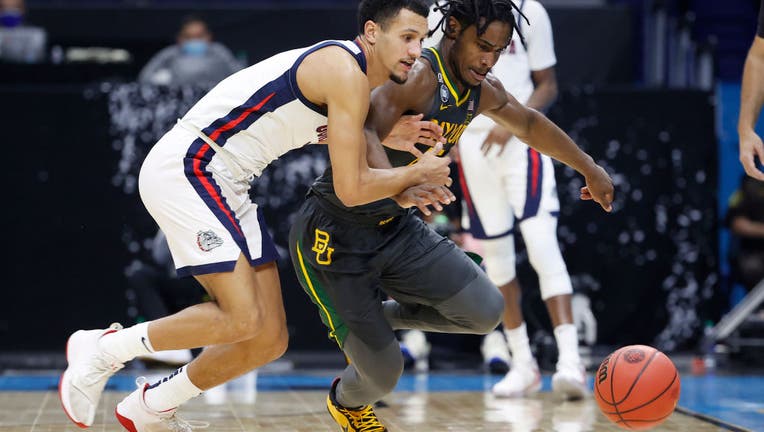 INDIANAPOLIS, INDIANA - APRIL 05: Jalen Suggs #1 of the Gonzaga Bulldogs and Davion Mitchell #45 of the Baylor Bears battle for a loose ball in the National Championship game of the 2021 NCAA Men's Basketball Tournament at Lucas Oil Stadium on April

INDIANAPOLIS - Baylor is on top of the college basketball world, winning its first national championship while denying perfection for Gonzaga.

All-American guard Jared Butler had 22 points and seven assists for the Bears in 86-70 victory Monday night. His backcourt mates did plenty as well.

MaCio Teague had 19 points and Davion Mitchell 15 for the Bears. Adam Flagler, a guard who will be back next season, added 13 points, and fifth-year senior Mark Vital had 11 rebounds. Baylor ended the season at 28-2.

Freshman Jalen Suggs had 22 points for Gonzaga, which finished 31-1.

Indiana is still the last undefeated national champion, back in 1976.

Suggs, who banked in a game-winning 3-pointer from just inside half court in overtime to beat UCLA in the national semifinal game, scored 15 of his points in the second half. Drew Timme and Corey Kispert each finished with 12 points for the Zags.

The Bears from the Big 12 raced out a 9-0 lead in the game’s first 2 1/2 minutes and never trailed. They led by 19 midway through the first half, the largest deficit Gonzaga had faced all season, and it was as many as 20 points after halftime even after the Zags got back within single digits briefly.

Butler is the first player in a national championship game with at least 20 points and seven assists since Carmelo Anthony for Syracuse in 2003.