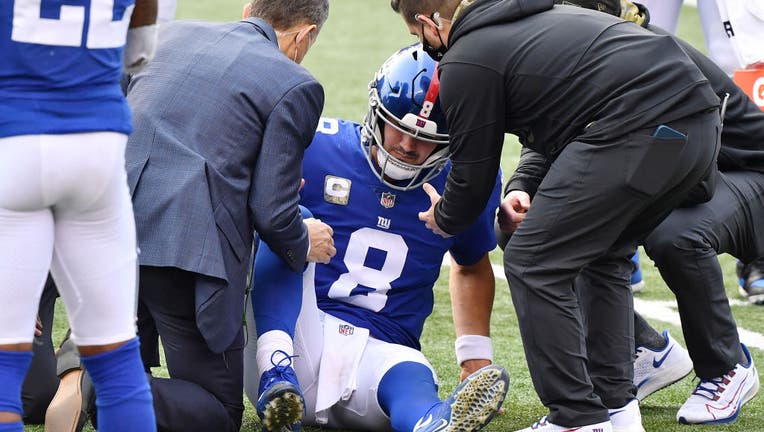 CINCINNATI, OHIO - NOVEMBER 29: Trainers tend to Daniel Jones #8 of the New York Giants after he is injured during the second half against the Cincinnati Bengals at Paul Brown Stadium on November 29, 2020 in Cincinnati, Ohio. (Photo by Jamie Sabau/Ge

EAST RUTHERFORD, N.J. - New York Giants quarterback Daniel Jones practiced on a limited basis on Friday and has been listed as doubtful with a hamstring injury for Sunday’s game against the Seahawks in Seattle.

Jones, who was injured last weekend against Cincinnati, did not practice on either Wednesday or Thursday.

If Jones cannot play, Colt McCoy will start for the Giants (4-7), who are riding a three-game winning streak that has put them in first place in the NFC East. The Seahawks (8-3) lead the NFC West.

Coach Joe Judge said Jones threw the ball well on Thursday. He said a decision on Sunday will be made after seeing how Jones comes out of the practice and the flight to Seattle on Saturday. The team plans to hold a walk-through in Seattle on Saturday.

“We need to do enough with him at practice to make sure that he can go back there and operate and have the mobility to protect himself and be able to move in the pocket, get the ball thrown away, pull it down to run if we need to,” Judge said.

Judge said Jones would probably tell him he could play if asked.

“We have to really trust our eyes more so than our ears when we’re dealing with Daniel because he’s definitely a competitor,” Judge said.

Judge said McCoy, who played most of the second half against the Bengals, has looked good at practice this week.

“He’s working hard,” Judge said. “Colt’s got a lot of experience. He doesn’t really miss a beat. He gets in there, it’s like riding a bike for this guy. He gets in there and he competes. Everything is very, very competitive with Colt. He goes in there, especially offense versus defensive period, we’re making it competitive. He gets a lot of the juice flowing there throughout the team. He’s not afraid to mix it up and talk a little smack with the guys. It’s fun seeing him operate.”

The Giants have brought back veteran QB Alex Tanney. He was in training camp before being cut. He will be able to join the team on Saturday after going through the COVID-19 protocol.

Judge said Tanney will make the trip to Seattle.