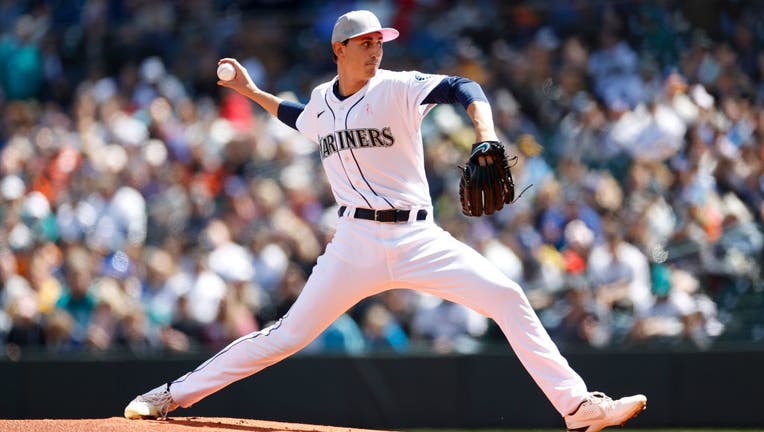 SEATTLE, WASHINGTON - MAY 08: George Kirby #68 of the Seattle Mariners pitches during the first inning Tampa Bay Rays at T-Mobile Park on May 08, 2022 in Seattle, Washington. (Photo by Steph Chambers/Getty Images)

SEATTLE - Abraham Toro hit a tying homer in the ninth inning, Ty France singled home the winning run in the 10th and the Seattle Mariners beat the Tampa Bay Rays 2-1 on Sunday to snap a six-game losing streak.

"We can definitely catch our breath now," France said. "It’s been a rough week."

Manuel Margot hit his third home run of the series for the Rays, who had won six straight overall and eight in a row on the road.

Tampa Bay appeared headed to a four-game sweep before Toro connected off Andrew Kittredge with one out in the bottom of the ninth for his fourth home run. Kittredge was trying for a two-inning save.

In the 10th, Rays manager Kevin Cash chose to intentionally walk Adam Frazier with one out. France singled to left field off Matt Wisler (1-1), scoring automatic runner Jarred Kelenic with the winning run.

France has been one of the best hitters in baseball this season, batting .319 with 22 RBIs.

Paul Sewald (1-1) struck out pinch-hitter Yandy Diaz with two on to end the top of the 10th.

Prized prospect George Kirby pitched six shutout innings in his major league debut for the Mariners, who had lost 10 of 11.

The 24-year-old Kirby, a first-round draft pick out of Elon, struck out three of his first four batters after being called up from Double-A Arkansas. He allowed four hits and fanned seven with no walks on 81 pitches.

"It’s exactly what we needed," Mariners manager Scott Servais said. "I really wasn’t expecting it. I didn’t know what we were going to get from a rookie in his first time out there, but I could not have asked for more. So I’m really excited for him and having him part of our rotation going forward."

Rays starter Ryan Yarbrough gave up four hits with four strikeouts and a walk in five scoreless innings. It was his second start of the season, after permitting five runs in the first inning of his 2022 debut on Tuesday.

"Our pitching went toe-to-toe with them," Cash said. "Yarbs was really encouraging. That was the highlight of our day."

Andrés Muñoz followed Kirby and struck out the side for the Mariners in the seventh, but Margot finally broke through against Erik Swanson in the eighth. It was the first run the reliever has given up in 12 innings this season.

Margot went 2 for 3 and finished 5 for 11 with three homers and eight RBIs in the series, including a grand slam Saturday. Having seen enough, the Mariners intentionally walked him in the 10th inning with two outs.

"One run doesn’t generally get it done," Cash said. "Saying that, their guy (Kirby) was just outstanding. What a day for him. I’m guessing his mom is pretty happy."

Kirby had a vocal cheering section of about 20 in the crowd that included his mother on Mother’s Day. The group could easily be heard on the field, especially as Kirby worked back from three 3-0 counts for outs and struck out the side in the first inning.

"Usually I kind of zone that stuff out, but I heard them pretty good today," Kirby said. "It was my parents, my sisters were there, and uncles, and I had, like, probably like 15 buddies from either Elon or high school that I’ve been friends with since elementary school. They made a promise to me and said that, ‘When you get called up we’re going to be there,’ and they kept their promises. Pretty awesome."

Mariners: SS J.P. Crawford missed the game with back spasms. He strained his back diving to first base in the third inning of Friday’s 8-2 loss to the Rays. … Servais said reliever Sergio Romo (right shoulder inflammation) could be activated in the next day or two and might not need a minor league rehab assignment.

Rays: LHP Jeffrey Springs (1-0, 0.69 ERA) will be the bulk innings pitcher when Tampa Bay visits the Los Angeles Angels on Monday. It was unclear whether he would start or the Rays would use a different opener. Cash said he hopes Springs can go four innings, though Springs optimistically hoped to get to five or six.

Mariners: RHP Chris Flexen (1-4, 3.10) starts the series opener against Philadelphia on Monday. His turn in the rotation was delayed a day so Kirby could start Sunday.