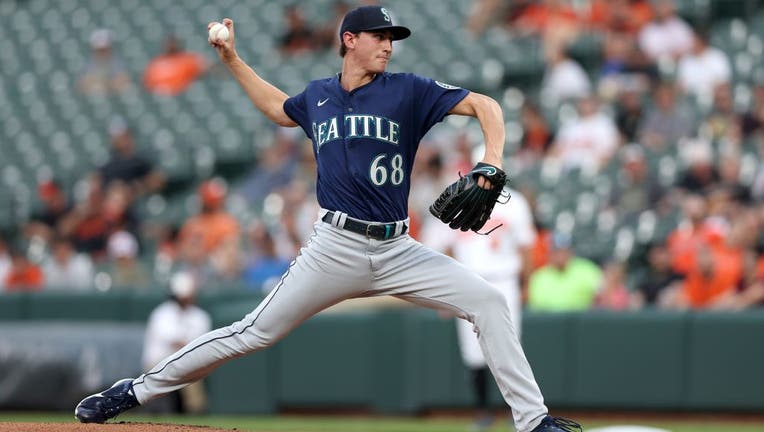 BALTIMORE, MARYLAND - MAY 31: Starting pitcher George Kirby #68 of the Seattle Mariners pitches to a Baltimore Orioles batter in the first inning at Oriole Park at Camden Yards on May 31, 2022 in Baltimore, Maryland. (Photo by Rob Carr/Getty Images)

BALTIMORE - George Kirby’s first big league win came with plenty of support — from both Seattle’s offense and some familiar faces in the crowd.

"My sister came. I got some of my former coaches from Elon, a lot of my Elon teammates," the rookie right-hander said.

Kirby allowed four hits in six innings, and Taylor Trammell had three hits and four RBIs to help the Mariners to a 10-0 rout of the Baltimore Orioles on Tuesday night.

Trammell hit an RBI double in the second when his grounder up the middle caromed off second base and into shallow center field. Shortstop Jorge Mateo appeared to be in decent position to field the ball before the bizarre bounce. Seattle added two more runs that inning and then four in the third.

Kirby (1-1) struck out eight and walked one in his fifth major league start. He also went six scoreless innings in his debut May 8 against Tampa Bay, but he settled for a no-decision.

Reliever Bryan Baker (1-3) got the first four outs as essentially an opener for the Orioles, but he allowed an RBI double to Julio Rodríguez in the first. Zac Lowther came on with two on and one out in the second after being recalled from Triple-A Norfolk before the game. He allowed six runs — five earned — in 5 1/3 innings.

"We knew they were up against it, kind of in a bullpen game," Seattle manager Scott Servais said. "So it was nice to jump out early."

Trammell was Lowther’s first hitter, and his grounder off second base turned into a double that made it 2-0.

"I got rewarded for doing a lot of things right that at-bat," Trammell said. "I put a really good swing on it, just happened to be a little bit, I got on top of it a little but, but I hit it hard."

The following inning, Trammell hit a sacrifice fly, Raleigh added a two-run single, and after a two-out error by third baseman Ramón Urías, Ty France made it 8-0 with an RBI single.

Lowther didn’t allow a hit after the third inning until Dylan Moore tripled with two outs in the seventh. Trammell followed with a run-scoring single.

Rodríguez was ejected by plate umpire Lance Barrett immediately after taking a called third strike in the eighth.

Infielder Chris Owings pitched the ninth for the Orioles and allowed an RBI double by Trammell. The game also ended with Seattle catcher Luis Torrens playing second base.

Top prospect Adley Rutschman went 0 for 4 with three strikeouts for the Orioles, but he continues to work deep into at-bats. He saw 21 pitches.

"I was trying to beat him inside pretty much the whole time," said Kirby, who struck out the Baltimore catcher twice. "He was staying on it for the most part. I beat him with a couple sliders, but he’s got a good approach, so it was a tough battle for sure."

Mariners: OF Kyle Lewis did not play, and Servais said a stint on the concussion list was possible. "The ball hit him in the shoulder and then kind of ricocheted and hit him in the head the other night," he said. ... Servais said INF Abraham Toro (left shoulder sprain) could rejoin the team as soon as Wednesday. ... RHP Erik Swanson (right elbow inflammation) is expected to go out on a rehab assignment in the next couple days and could rejoin the Mariners by the end of this nine-game road trip.