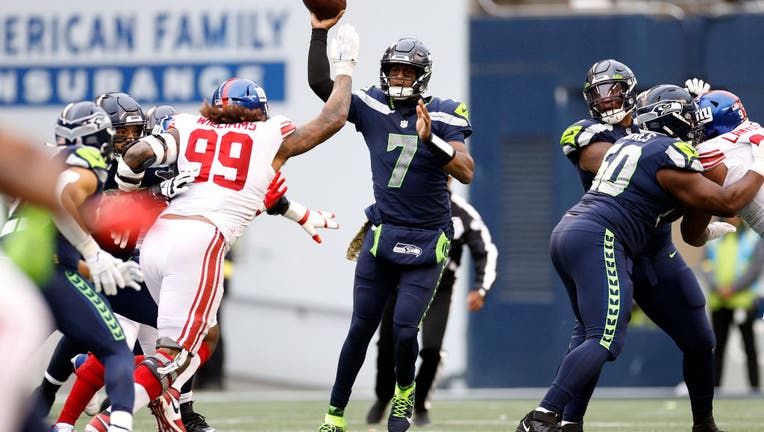 SEATTLE, WASHINGTON - OCTOBER 30: Geno Smith #7 of the Seattle Seahawks passes against the New York Giants during the third quarter at Lumen Field on October 30, 2022 in Seattle, Washington. (Photo by Steph Chambers/Getty Images)

The opportunity emerged, and Lockett seized it, securing a 33-yard touchdown catch that provided the decisive points in Seattle’s 27-13 win over the New York Giants on Sunday.

Lockett hauled in the pass from Geno Smith with 9:18 left that snapped a 13-13 tie. Kenneth Walker III added a 16-yard touchdown run in the closing minutes and Seattle walked away with a third straight victory.

"I had a lot of teammates behind me, talking to me. Pete was able to come talk to me, and I just had to breathe," Lockett said. "That was the biggest thing and luckily I had the opportunity just to be able to go out there and to be able to overcome it just with another play."

The only matchup of teams with winning records in the NFL this week was a slugfest until the fourth quarter, when Lockett made up for his earlier miscues and Walker finally broke free, helping the surprising Seahawks (5-3) stay atop the NFC West.

New York (6-2) saw its four-game win streak snapped entering its bye week and lost ground to undefeated Philadelphia in the NFC East — largely because the Seahawks corralled Saquon Barkley, who was held to a season-low 53 yards on 20 carries and had three catches for 9 yards.

Lockett hauled in a short pass at the 3-yard line in the first half, but Adoree’ Jackson forced and recovered a fumble, leading to a 1-yard TD run from Barkley. Late in the third quarter, Lockett was free behind the Giants secondary but dropped what would have been a 33-yard touchdown.

Given another chance on Seattle’s next drive, Lockett came through. First he made a solid 12-yard catch. Then he made a stutter-and-go move on Jackson and flashed open down the sideline. Smith’s throw was on target for the touchdown and a 20-13 Seattle lead.

"I was giving him a different route and Tyler noticed that the DB was sitting, he was squatting," Smith said. "He signaled me one of our double moves, so I gave it to him and he went out there and he made a great play."

Seattle added insurance with 5:22 left thanks to Walker. New York’s Richie James fumbled his second punt return of the game, giving Seattle the ball at the Giants 32. Two plays later, Walker reversed his field, broke tackles and scooted 16 yards for the clinching touchdown.

Walker finished with 51 yards on 18 carries. Smith was 23 of 34 for 212 yards and two touchdowns, including a 3-yard TD pass to DK Metcalf in the second quarter. Smith was 5 for 5 for 75 yards on the drive capped by Lockett’s scoring catch. Both Lockett (hamstring/oblique) and Metcalf (knee) were questionable entering the game.

"Tyler, he’s the best receiver I’ve ever been around. I’ve never seen anybody do all of the things so consistently for such a long time," Carroll said. "Of course he’s going to make a double move and score a touchdown. Of course he’s gonna come back."

Barkley entered the week leading the NFL in yards from scrimmage and was second in yards rushing. His previous season low on the ground was 70 yards against Green Bay. But he struggled against a Seahawks defense that gave up 235 yards rushing to New Orleans less than a month ago.

"We knew going into this game we had to take care of (Barkley). We knew the focal point of their offense and what gets them going," Seattle pass rusher Uchenna Nwosu said.

The lack of a run game put pressure on Daniel Jones, who avoided big mistakes but didn’t make any big plays through the air. Jones was 17 of 31 for 176 yards and was sacked five times.

Carroll tied Bud Grant for 18th on the all-time victory list with 168, including playoffs. Carroll said he called Grant after the game as the two have a close relationship from Carroll’s time coaching in Minnesota.

"I can’t tell you how much I love the guy and how much I’ve respected him throughout my career," Carroll said.

Carroll was also penalized for sideline interference late in the fourth quarter when he collided with an official. Referee Jerome Boger inadvertently announced the penalty as being against the "Seattle Mariners."

New York lost defensive lineman Nick Williams in the first quarter to a biceps injury and James was ruled out with a concussion after he hit the back of his head on the turf after his second fumble. Seattle played nearly the entire game without pass rusher Darrell Taylor due to a hip injury, and versatile safety Ryan Neal limped off in the fourth quarter with cramps in both hamstrings.

Giants: After a bye, New York hosts Houston on Nov. 13.

Seahawks: At Arizona next Sunday.