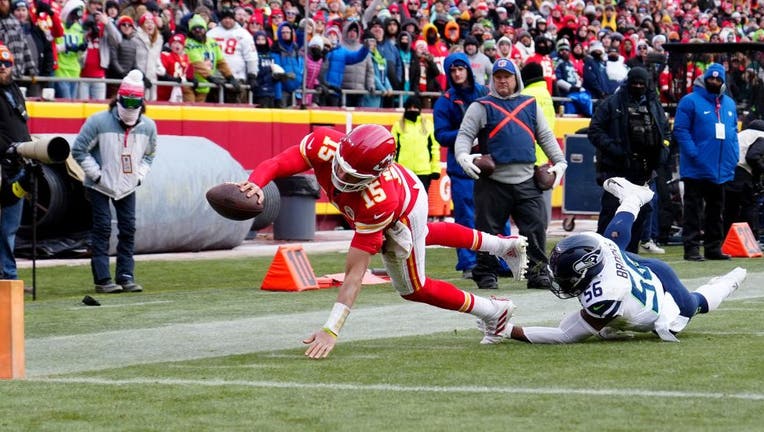 KANSAS CITY, MISSOURI - DECEMBER 24: Patrick Mahomes #15 of the Kansas City Chiefs dives past Jordyn Brooks #56 of the Seattle Seahawks to score a touchdown during the fourth quarter at Arrowhead Stadium on December 24, 2022 in Kansas City, Missouri.

KANSAS CITY, Mo. - Even as the Kansas City Chiefs squeaked out wins the past few weeks, coach Andy Reid lamented both the state of their inexperienced defense and their inability to put away struggling teams.

They showed massive improvement in both areas against Seattle on Saturday.

That youthful defense shut down Geno Smith and the slumping Seahawks offense, Patrick Mahomes threw two TD passes before running for a clinching score in the fourth quarter, and the Chiefs rolled to a 24-10 win that allowed them to keep pace with Buffalo for the best record in the AFC.

"I mentioned it the other way the last couple of weeks, that they need to get better," Reid said of his defense, which often has five or more rookies on the field at a time. "They’re making progress and I thought they did a nice job today."

Indeed, the Chiefs stopped the Seahawks (7-8) twice on fourth down, picked off their Pro Bowl quarterback in the end zone and dealt coach Pete Carroll’s team their fifth loss in six games along with a near-knockout blow to their playoff hopes.

Travis Kelce had six catches for 113 yards, and Kadarius Toney and Jerick McKinnon had touchdown catches, as the AFC West champion Chiefs (12-3) remain tied with the Bills — who hold the tiebreaker — with two games to go.

We’re on a mission here in Kansas City," Chiefs defensive end Frank Clark said, "and the goal is to finish the season strong. The last few weeks we haven’t been getting the job done as far as finishing strong. A lot of tight games."

Kenneth Walker III was the biggest bright spot for Seattle, running for 107 yards but failing to reach the end zone. But the Chiefs mostly kept DK Metcalf in check, and Seattle didn’t reach the end zone until the closing minutes of the game.

"We just couldn’t get going and couldn’t make first downs," Carroll said. "We got nothing going at all."

Much like the rest of the country, the cold weather that flooded the Midwest produced some frigid temperatures — the wind chill was minus-2 at kickoff, and that was an improvement over the previous two days. In fact, it had been so cold the tarp was frozen to the field when workers tried to remove it three hours before kickoff.

That didn’t bother a half-dozen Seahawks, including DK Metcalf and his fellow wide receivers, who walked out of the tunnel bare-chested shortly afterward for their pregame warmups on the ice-covered field.

Maybe they weren’t cold, but Seattle’s offense was downright frigid.

Playing without wide receiver Tyler Lockett, who had surgery on his broken hand this week, Smith and Co. gained just 18 yards on their first 15 plays, and they were forced to punt on their first five possessions.

The Chiefs took advantage of the slow start, too. Mahomes threw a pop pass to Toney to cap a 63-yard TD drive, then a pass to McKinnon out of the backfield a few minutes later for another score. And by the time Harrison Butker drilled a 47-yard field goal late in the half, the Chiefs had jumped out to a 17-0 lead.

Even when Seattle got a field goal before halftime, much of the drive was aided by defensive penalties.

While the Chiefs struggled to extend their lead in the second half, the Seahawks proved incapable of trimming it.

They failed on fourth down at the Kansas City 34 when tight end Colby Parkinson was stood up after a catch; failed on fourth down again when Laquon Treadwell failed to run his route to the first-down marker and came up short; and failed to score at the Kansas City 22 when Smith overthrew Treadwell and was picked off by Juan Thornhill in the end zone.

The Chiefs, who have been maligned for failing to put struggling teams away, finally did it on the ensuing possession, when Mahomes hit Kelce with two long throws before sprinting to the pylon for the clinching touchdown.

"We just have to keep going. We’re on a roll," Toney said. "We have a goal right now and we’re just trying to get to it."

The Seahawks still have not won at Arrowhead Stadium since Nov. 21, 1999. ... The Seahawks were one of three teams Mahomes had yet to beat along with Indianapolis and Minnesota. ... Mahomes extended his consecutive completions streak to 21 at the start of the game before missing his next throw. ... McKinnon has six TDs in his past four games.

Seahawks: NT Al Woods (Achilles) and SS Ryan Neal (knee) were inactive. ... FS Joey Blount (knee) and RB Travis Homer (ankle) left in the first quarter, and RT Abraham Lucas (thigh) in the third. ... WR Marquise Goodwin also left with a wrist injury, though he was able to return to the game.