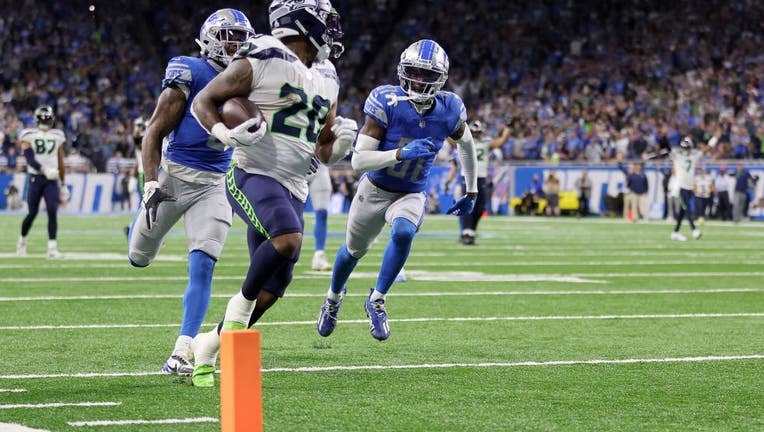 DETROIT, MICHIGAN - OCTOBER 02: Rashaad Penny #20 of the Seattle Seahawks scores a touchdown in the fourth quarter of the game against the Detroit Lions at Ford Field on October 02, 2022 in Detroit, Michigan. (Photo by Gregory Shamus/Getty Images)

DETROIT - Geno Smith and Rashaad Penny were so good the Seattle Seahawks never needed their punter.

Smith accounted for three touchdowns in the first half and Penny had a pair of long second-half scoring runs, helping Seattle hold off the Detroit Lions for a 48-45 win Sunday.

It was yet another high-scoring game for the Lions, who are averaging 35 points and giving up slightly more. They are the first team in NFL history to have scored and allowed a combined 281 points through the first four games of a season.

"We’re going to look at everything," coach Dan Campbell said. "I have a lot of faith in (defensive coordinator) Aaron Glenn. That’s why I hired him, but I think we need to take a deep dive on our defense from the coaching all the way down."

The Seahawks (2-2) were stopped on a third down late in the third quarter, but the Ford Field game clock wasn’t set properly. Seattle made the most out of the second chance and Detroit’s unorganized defense on Penny’s 36-yard touchdown run on a third-and-16, opening a 38-23 lead.

T.J. Hockenson had eight receptions and set career highs with 179 yards receiving and two touchdowns, the second of which helped the Lions (1-3) pull within three with 5:26 remaining.

Smith completed a couple more passes on the ensuing drive, which ended with Penny’s 41-yard touchdown run on third-and-5. Penny finished with 151 yards rushing on 17 carries.

Jared Goff’s fourth touchdown pass went to Justin Jackson with 1:06 left, cutting the deficit to three once again. The Lions’ comeback hopes ended when Seattle recovered the onside kick and Penny’s run converted a third-and-5 in their territory.

Smith finished 23 of 30 for 320 yards, including a 17-yard touchdown pass to Will Dissly and a 2-yard pass to Noah Fant after Kalif Raymond fumbled that gave the Seahawks a 15-point lead late in the first half. The veteran quarterback ran seven times for 49 yards, including an 8-yard score on his second drive, and Carroll said the team should have carried him off the field.

"Geno played spectacular football," Carroll said. "I don’t know how you could play a whole lot better than that."

Smith’s favorite target was DK Metcalf, who had seven catches for 149 yards and beat Jeff Okudah in at least two one-on-one situations after saying the cornerback wasn’t locking down anyone.

"I don’t think we have a lockdown corner in our game today," Metcalf said.

Detroit’s high-scoring offense was productive, but it could not overcome the team’s dismal defense that allowed the Seahawks to score more in one afternoon than they had combined in their three previous games.

Goff was 26 of 39 for 378 yards with an interception on the first snap of the second half that Tariq Woolen returned 40 yards for a score that put Seattle up 31-15.

"I’m still kicking myself because of the interception," Goff said. "That could have been the difference in the game. I made a bad decision late in the play, and you can’t do that."

Jamaal Williams, carrying a heavier load with D’Andre Swift out with injuries, ran 19 times for 108 yards and two touchdowns.

Early in the fourth quarter, Metcalf accepted an offer to have a cart take him to the restroom and back to the field.

"I don’t like taking a cart, but in that situation, I’ll give myself a pass," he said.

Williams is the first player in the league to run for more than one touchdown in three of his first four games since LaDainian Tomlinson in 2005. He is the first Lion to have multiple scores on the ground in three games in a season since Barry Sanders in 1997.

Seahawks: LB Darryl Johnson (ankle) was hurt during the game and did not return.

Lions: Quintez Ceophus (foot) left the game with an injury, another hit for a WR group that had starters Amon-Ra St. Brown and DJ Chark inactive due to ankle injuries. ... CB Amani Oruwariye went out late in the game with a neck injury.

Seahawks: Stay on the road to face New Orleans on Sunday.

Lions: Visit New England on Sunday and don’t play at home until Oct. 30 against Miami.