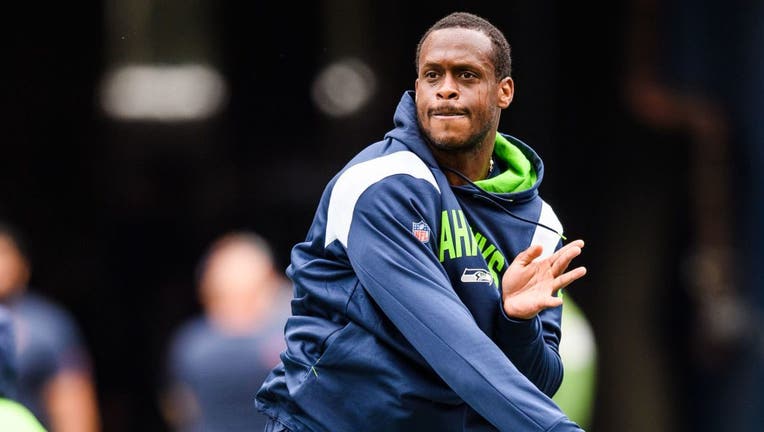 SEATTLE, WASHINGTON - AUGUST 18: Geno Smith #7 of the Seattle Seahawks warms up before the preseason game against the Chicago Bears at Lumen Field on August 18, 2022 in Seattle, Washington. (Photo by Jane Gershovich/Getty Images)

RENTON, Wash. - It's been seven years since Geno Smith was a starting quarterback in the NFL. It's rare that a quarterback will get a second chance as a starter after so long on the sidelines as a backup.

But winning the starting job for the Seattle Seahawks isn't a finish line for Smith.

"We got to win," Smith said on Friday. "We got to win and there is a lot of different aspects of winning but we got to just find ways to win no matter how."

Smith was a second round pick of the New York Jets in 2013 after a standout career at West Virginia. He started for two years with the Jets and was set to start entering his third year. Instead, he broke his jaw during training camp when he was punched by teammate I.K. Enemkpali in the team's locker room. Ryan Fitzpatrick took that opportunity and ran with it as Smith was relegated to backup duty once he recovered.

Smith would backup Fitzpatrick with the Jets, Eli Manning with the New York Giants, Philip Rivers with the Los Angeles Chargers, and Russell Wilson with the Seahawks over the next six seasons with just two starts in the first five years. Wilson's mallet finger injury last season led to Smith making three starts for Seattle and Smith's first stretch of games since 2014.

"I’ve never lost confidence in my ability or the things that I can do on the field," Smith said. "… And being in the room with those guys and just learning football, being in different football systems, being around different coordinators, I was able to gain a ton of knowledge."

Smith completed 68.4 percent of his passes in four games played for the Seahawks last year. He threw for 704 yards with five touchdowns with one interception. Seattle went 1-2 in his three starts with the two losses both being close fourth quarter defeats.

Over his first two years with the Jets, Smith was completing just 57.5 percent of his passes with 25 touchdowns and 34 interceptions. Smith says he's a much different player now than he was then. He's more consistent, takes fewer risks, and understands the importance of possession in the NFL game.

"I was 23, 24 years old back then," Smith said. "The difference now is my focus on maintaining the football, making sure I’m protecting the football. Back then when I was on the Jets, I felt like I would have a good game and a not-so good game. It was very inconsistent.

"And I think I was able to find some type of consistency in my game and I think that started with my feet, my base in the pocket. Obviously, getting stronger just over the course of my career and just growing as a man. And then just protecting the football. I’ve seen a bunch of football. I know what I’m looking at. I’m the veteran guy in the room now, so I’m not just the young kid that I was when I first got into the league."

Smith won the quarterback competition over Drew Lock in training camp. Lock's bid for the job was derailed by an untimely case of COVID-19, but Smith had been given the majority of reps with the first-team offense through camp even before Lock's illness. Lock had been tabbed to start the second preseason game against the Chicago Bears but was unable to play. Lock then had a middling performance in the preseason finale against the Dallas Cowboys before head coach Pete Carroll named Smith the starter following the contest.

"He’s presented himself in the best light, he’s been there for everything, he’s been on it, and he’s been consistent," Carroll said. "He could have had an extraordinary preseason. If you go back, a lot of balls were dropped in this preseason. He could have been 10-10, he could have been 6-6 in the last one, and I don’t know, 14-18 in the second game. He was on it all the way throughout.

"Geno has done a great job of leading in that regard, he’s as steady as you can be, he’s been consistent, and he’s been a really good leader as well. I expect him to handle it well."

While Smith is excited to have the opportunity to start again, there weren't any celebrations after Carroll made the call in Dallas.

"I didn’t take any moments (of reflection)," Smith said. "There was no celebration or anything like that. I went to the weight room the next day as I was going to do it anyway. And that’s just my mentality. I’m not star-struck or anything by this opportunity. I’ve been working my butt off and I think that the work is more important than all of the reflection and all of that type of stuff. It’s about taking care of business."

Outside of Seattle, and the Seahawks in particular, there may not be much faith in Smith, or Lock, to carry the team to significant success this season. The Seahawks themselves have been steadfast in their belief they can be successful this year.

"I'm really excited about this team," Carroll said earlier this week. "I love the makeup. I love the way that they've come together from way back when. I love the leadership. I love the speed. I love our style, in all aspects, and now we need to go out and show it and live up to what the expectations are. And so my expectations are very high."

For that to happen, Smith will need to pilot the offense skillfully. He may not be among the best quarterbacks in the NFL, but the Seahawks can compete with him at the helm. Their performances last season with Smith under center showed they can be in games down to the wire. A 26-17 loss to the Los Angeles Rams after replacing an injured Wilson. A 23-20 loss on the road against the Pittsburgh Steelers, a 13-10 loss to the New Orleans Saints at home, and a 31-7 victory over a hapless Jacksonville Jaguars team came with Smith at the helm.

"I think he's going to surprise a lot of people with how mature he is in his decision-making at the quarterback position. It's fun to see him just step into that role and just take advantage of it," wide receiver DK Mecalf said.

Smith is more mature now and more comfortable in the role than he's ever been before. He has more experience and knowledge of what it takes to succeed as a starter. Now it's about making the most of the opportunity at hand.

"I’m extremely excited. I really can’t wait," Smith said. "I’m extremely excited for the opportunity, but mainly just for all the guys. For all of us to be out there together and to get our season started. It’s extremely exciting. I know everyone here is excited and personally for me, I don’t feel any type of vindication or anything like that. It’s more so just preparing and doing the same thing I’ve always done; not making it more than what it is."

The Seahawks held only a walkthrough on Thursday due to the long week ahead of the opener on Monday night. The practice report is only an estimation.