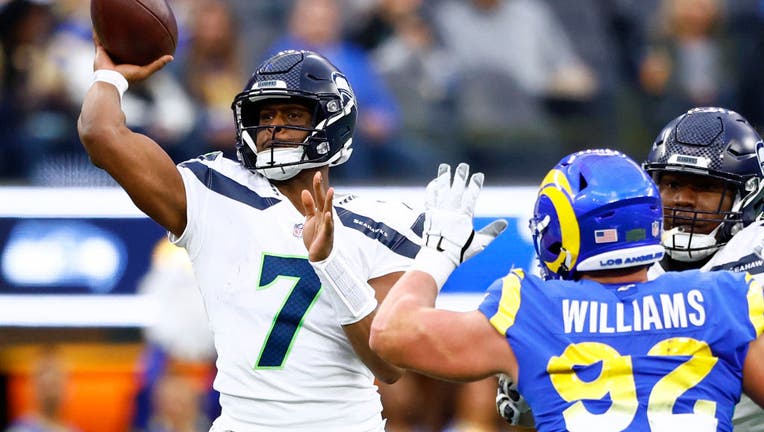 INGLEWOOD, CALIFORNIA - DECEMBER 04: Geno Smith #7 of the Seattle Seahawks throws the ball during the first quarter of the game against the Los Angeles Rams at SoFi Stadium on December 04, 2022 in Inglewood, California. (Photo by Ronald Martinez/Gett

Smith is the only starting quarterback in the NFL was a completion percentage over 70 percent (71.2) this season. He's thrown for 3,671 yards this season with 26 touchdowns and eight interceptions for Seattle. His stellar campaign has been one of the stories of the year in the NFL after being a backup for the last seven seasons.

"Honestly, my focus is on this week and this game," Smith said Wednesday when asked what a Pro Bowl would mean to him. "Obviously, those things are personal accolades, but I’m focused on the team part of it. It’s really important for us to go out there and get a win. It’s a crucial part of our season. We got three games left to figure out what we are going to do here. I’ve just been focused on that and locked in on that."

Smith is second in the NFL in passer rating (105.3), fourth in touchdowns (26) sixth in completions (337) and seventh in passing yards (3,671). He has  nine games with a passer rating of 100 or more, and nine games with multiple touchdown passes, which are both league highs. Smith was named NFC Offensive Player of the Month for October, and NFC Offensive Player of the Week in Week 4.

Smith joins Jalen Hurts of the Philadelphia Eagles and Kirk Cousins of the Minnesota Vikings in the NFC. Patrick Mahomes (Kansas City Chiefs), Josh Allen (Buffalo Bills) and Joe Burrow (Cincinnati Bengals) are the quarterbacks for the AFC.

By having 20 touchdown passes and earning a Pro Bowl spot, Smith triggers a $500,000 incentive in his contract, per multiple reports.

Woolen joins Sauce Gardner of the New York Jets as rookies to make the Pro Bowl at cornerback. Woolen is tied with Philadelphia Eagles safety C.J. Gardner-Johnson for most interceptions in the NFL this season with six. He also returned a blocked field goal for a touchdown in a Week 2 loss to the San Francisco 49ers.

"It'll mean a lot to be honest," Woolen said of a potential Pro Bowl nod. "Just because like I said, like 30 games into playing corner (ever) and having so many people thinking like, 'oh, he's a liability or blah, blah, blah. He may not understand the game' and all that stuff. But it's just a great achievement and it's something that I looked forward to if I ever got the chance to play in the NFL. So I got the chance now and it's all starting to happen."

Diggs and Myers are both starters at their positions in the NFC. It's the third-straight year Diggs has been named to the Pro Bowl. For Myers, it's his second trip after making the 2018 team with the Jets.

Diggs has 15 interceptions with Seattle since joining the team via trade midway through the 2019 season.

Myers is 26 for 27 on field goal attempts this season, including 6-of-6 from 50 yards or more. He leads all NFL kickers in field goal percentage.

The Pro Bowl experience will no longer include a normal football game itself. Beginning this year, the format for the event will include a flag football game and a variety of skills competitions.