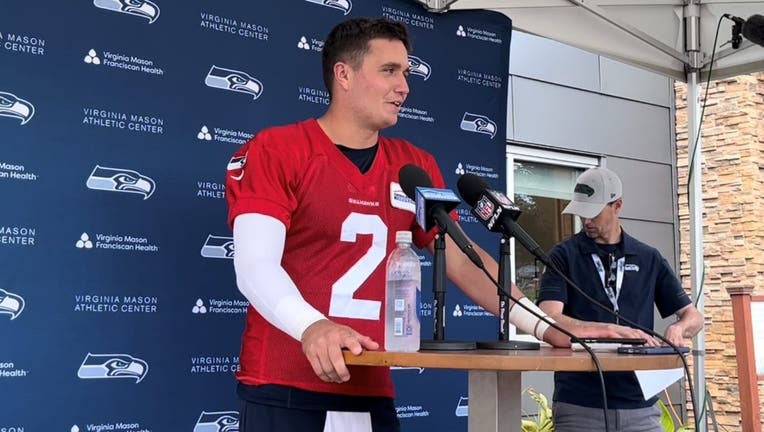 RENTON, Wash. - The quarterback battle between Geno Smith and Drew Lock for the starting quarterback job of the Seattle Seahawks hasn't appeared to be much of a battle through the first few practices of training camp.

Smith has taken the overwhelming majority of snaps with the first-team offense through the first four practices of training camp. Lock has primarily run with the second unit.

Performances from both quarterbacks have mixed in the early days of camp as they look to secure the starting job in the post-Russell Wilson era. But if you were expecting a fully equal opportunity between the quarterbacks for the starting job, it hasn't happened yet at camp.

"Every quarterback wants the one’s reps," Lock said after practice on Monday. "I think that process will take care of itself. I’m going to keep doing everything I can with the two’s, leading those guys, letting them feel me every single day, feeling like it’s the most important rep, not only to me again, but to them as well. That will help this team grow, being able to have such a good one-two punch with the one’s and the two’s, that helps these practices flow.

"It helps this team grow and that’s just kind of my idea on it, and I’m going to keep doing everything that I can with these two’s right now and let time sort it all out."

Both Smith and Lock are eagerly attacking a second chance at being a start with Seattle. Smith lost his with the New York Jets after getting punched and sustaining a broken jaw by teammate IK Enemkpali. Ryan Fitzpatrick took the opportunity Smith's absence provided and ran with it to entrench himself in the role Smith's injury forced him to vacate.

Smith has since served as a backup to Eli Manning with the New York Giants, Philip Rivers with the Los Angeles Chargers, and then Wilson in Seattle. Smith had started just two games in five seasons before getting a three-game stint in place of an injured Wilson last year.

"It means everything. It really does," Smith said. "It’s an opportunity for me again to continue my career to lead the charge and be the guy again. That’s what you want. It’s what I’ve been working for. I’m extremely excited, very thankful, very grateful. I’ve been working my butt off. I’ve been working. I feel as though it is something I deserve and I just to have go out there and continue to be me."

Lock flamed out as a starter after being drafted in the second round of the 2019 NFL Draft by the Denver Broncos. After a few promising starts as a rookie, coaching changes and inconsistency with his play left him on the outs, losing a quarterback battle to Teddy Bridgewater last year.

"Any time that I am standing behind the center and get to call out a cadence, it’s the most important rep of my life right then and there. I’m competing with everything that I have, every single play," Lock said. "It doesn't matter if it’s junior varsity at Bellevue High, I’m going to give everything that I have for that single play there. We will let the time evolve and see where it goes from there, but every play is just as important to me, no matter where."

With as much as head coach Pete Carroll has talked up the battle at the spot heading into camp, the fact that the two aren't splitting reps with the first-team is notable. Will that change? Possibly. It could be that they've wanted the quarterbacks to work with the same units through the early install days of camp before evening out the opportunities. Nevertheless, the "mock game" scrimmage is coming up on Saturday, pads go on for the first time on Tuesday, the first preseason game is a week from Saturday in Pittsburgh. There isn't that much time to truly start a competition if it's not already underway.

At the very least, it appears to state that Smith is in the driver's seat for the starting job.

– Safety Jamal Adams was back at practice on Monday after missing Friday and Saturday to get his injured finger evaluated away from the team. Adams reportedly sustained a broken finger during the first practice of camp on Wednesday as his finger was caught in a facemask. He was wearing a protective cast on the injured finger during Monday's practice.

– Wide receiver Dee Eskridge was still not taking part in practice drills, but was back with a helmet on for some of the conditioning and individual activities. Eskridge has been nursing a minor hamstring strain.

– It was a rough day for the quarterbacks and the offense overall as the defense had the upper hand most of the afternoon. Smith was intercepted by linebacker Uchenna Nwosu on a check down throw to Will Dissly. Both quarterbacks were unable to get the team into the end zone during eight reps on red zone blitz drills. Tight end Noah Fant dropped an open pass from Lock as well. The highlight of practice for the offense was Penny Hart getting free on a double move for a wide open touchdown throw from Lock.