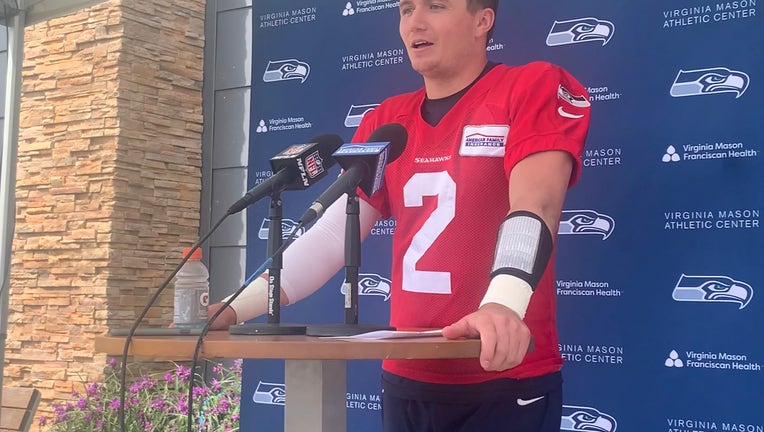 Seahawks quarterback Drew Lock speaks with reporters after a practice at mini-camp at the Virginia Mason Athletic Center in Renton, Wash. on June 8, 2022. (photo by Curtis Crabtree / FOX 13 Seattle)

RENTON, Wash. - For the first time in a decade, the starting quarterback for the Seattle Seahawks will be determined by a competition that will last well into August.

Geno Smith and Drew Lock are vying for the chance to lead the team in the post-Russell Wilson era. Smith has spent the last two seasons with Seattle and re-signed with the team this offseason with the chance to become a starter again on the table. Lock was acquired from the Denver Broncos in March in the trade that sent Wilson to Denver after 10 years as the Seahawks' starter.

Smith has the edge at this stage in the offseason with his knowledge of Shane Waldron's offense carried over from last season. Smith played in four games and made three starts in place of an injured Wilson last year. He completed 68.4 percent of his passes for 702 yards and five touchdowns with an interception in his time in the lineup.

Smith hasn't been a full-time starter since his second season in the NFL in 2014. Despite his relegation to backup status behind Eli Manning, Philip Rivers and Wilson over the last five seasons, Smith remained confident he would get a chance to start in the NFL again at some point.

"Of course, I knew it," Smith said. "I knew it and that’s why I prepared the way that I did and trained the way that I do. I believe in myself and my abilities and I also know that things happen. I was sitting behind three ironmen with Eli, Philip, and Russ, those guys don’t miss games, but I always knew that I had the ability to play in this league. I’ve done great things in the preseason and even when I did start, I had good games, but I knew the time would come and it did,."

That opportunity ahead with Seattle was the reason he made the decision to return to Seattle this offseason despite being a free agent. Smith said he did mull over other offers but that the chance ahead with the Seahawks was right for him to return.

In Smith's three starts, they lost by a field goal at the Pittsburgh Steelers and New Orleans Saints before a blowout 31-7 victory over the Jacksonville Jaguars on Halloween. Smith played well enough to put Seattle in position to win all three games, which is what you hope for in a backup quarterback. But the ask of a starter in more profound and Smith knows he'll need to deliver more if he's the guy this year.

"I think if you just talk about my play, I think I did well enough to get this opportunity, but the wins are the only thing that matter," Smith said. "In those starts, I was 1-2, we lost two tough games to some playoff teams, really good teams, and I really think that if I had executed a few things better, then we could have won the game and I know every single guy feels the same way."

While most expect Seattle to regress after Wilson's exit from Seattle, Smith said he is still very high on the team's potential for the upcoming season.

"I do believe that we have a championship caliber team," Smith said. "It’s on us to make sure that we put that effort forward, and when it’s that time to execute, we do what we have to do, so these aren’t just words, that we can put those things into action."

For Lock, it's a fresh start after three years in Denver. Lock made 21 starts in 24 games played for the Broncos. While Lock has flashed the ability that made him a second-round pick in 2019, he's also been inconsistent and too turnover prone. He led the NFL in interceptions with 15 in 2020 in 13 starts that season.

But Lock is eager for the new opportunity with Seattle.

"From fresh faces in the quarterback room, the offensive coordinator, from who's my center, just meeting new people, whether that's the training room or the equipment staff, it was just needed. It was time (for a change)," Lock said.

Lock had a quarterback competition just last season with Teddy Bridgewater in Denver. Bridgewater won the starting job for the Broncos with Lock making three starts in six appearances last season. Lock completed 60.4 percent of his passes for 787 yards with two touchdowns and two interceptions on the season.

Lock said he got too focused on the day-to-day aspect of the quarterback battle last year. He tried to measure himself against Bridgewater each day on whether he won that day or Bridgewater did. It became a mental hurdle for him that he believes didn't help him.

"It's not good for your process of becoming a better quarterback," Lock said. "It's not about who won that day. It's about did I get better today to make the guys around me better? Because if I'm playing at my best, the other 10 dudes around me are going to be playing really good football too."

So what will Lock use to gauge his success in the quarterback battle this summer?

"Decision, timing, accuracy," Lock said. "That's the quarterback room standard. ‘All right, did I make the right decisions? Is that where the ball was supposed to go? Yes. Was I on time? Was it within my drop? And then was I accurate?’

"So biggest thing for me right now is changing footwork from what I did last year to this year, just working on the timing of my feet. And the more and more I get better with the timing of my feet, the more accurate the ball comes. The decision-making is there right now. It's just about timing my feet up with these new route concepts and delivering an accurate football. And if I feel like I can check all three of those marks at the end of these passes, then I was doing my job and I got to keep making sure that if I throw 20 balls, I got 20 triple check marks on each of those plays. That's really my checklist. We talk about it in the quarterback room every single day."

Smith has the advantage due to his familiar with his teammates and Waldron's offense giving him a jump start for this summer. However, Lock said after practice Wednesday that he feels very good about the offense after diving into the playbook and getting some time on the field in recent weeks.

"Drew is cool as heck, I love Drew to death," Smith said. "Just getting the chance to meet him and getting a chance to know him, he has a lot of swag, he’s a young guy, can throw it, has all of the ability in the world, he’s very smart, and he’s just one of the guys. He has a great feel for the locker room, guys love him, love talking to him, you see him rapping Jeezy and all of that cool stuff, so he’s just one of the guys. I really like Drew."