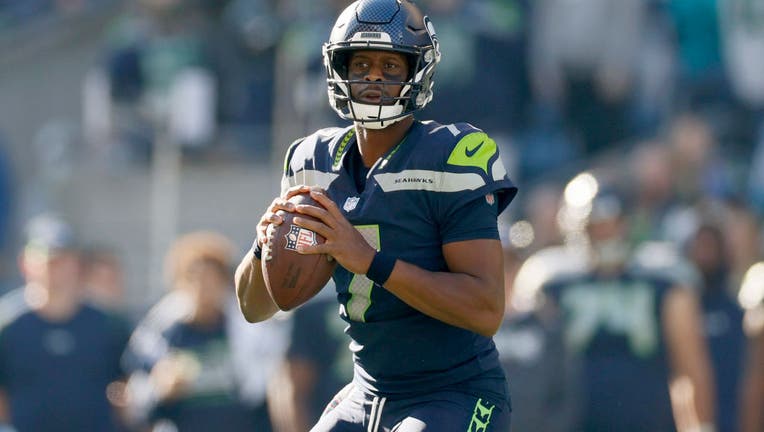 SEATTLE, WASHINGTON - OCTOBER 31: Geno Smith #7 of the Seattle Seahawks looks to pass against the Jacksonville Jaguars during the second quarter at Lumen Field on October 31, 2021 in Seattle, Washington. (Photo by Steph Chambers/Getty Images)

The news, which comes just a day after Seattle's last game of the season, was first reported Monday by KJR's Ashley Ryan.

Smith was booked into a King County correctional facility around 2:00 a.m. and released on his own recognizance at 9:27 a.m.

Smith was arrested by the Washington State Patrol, but no other information was immediately available.

"Geno is fully cooperative with the investigation. I hope that an open mind can be kept by all as the facts are ascertained," Smith’s attorney Jon Fox said in a statement.

Smith has been the backup quarterback to Russell Wilson for the last three seasons.

He stepped in for 3 games in 2021 after Russell Wilson injured his hand, going 1-2, completing 65 of 95 passes, with five touchdowns and an interception.

Smith had appeared in just one game during his first two seasons with Seattle. He was on a one-year contract with Seattle and will be a free agent after the end of the current NFL season.

He was the starting QB for the New York Jets for three seasons before taking the backup QB spot at several other NFL teams prior to arriving in Seattle.

Seattle Seahawks Pro Bowl safety Quandre Diggs was carted off the field after suffering a broken right leg and dislocated ankle in the fourth quarter Sunday against the Arizona Cardinals.

Smith issued a statement Monday evening after news of his arrest broke, saying that "being arrested brings a taint onto the reputation that is impossible to undo, no matter what really happened." Smith said he hopes people will reserve judgment and will have more to say later.