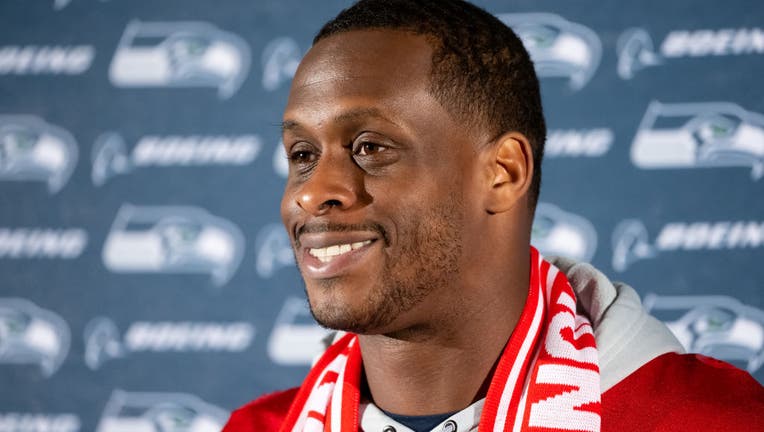 Geno Smith takes part in a press conference after practice. On Nov. 13, 2022, an NFL game takes place in Germany for the first time. The Tampa Bay Buccaneers meet the Seattle Seahawks at the Allianz Arena. (Photo by Sven Hoppe/picture alliance via Ge

MUNICH - Pete Carroll arrived in Germany with a reminder that the Seattle Seahawks are teaching people lessons about having low expectations.

The surprising Seahawks lead the NFC West and take a four-game winning streak into Sunday’s matchup with Tom Brady and the struggling Tampa Bay Buccaneers.

"The expectations were just like, nowhere," the Seahawks coach said Thursday at the training ground of soccer club Bayern Munich. "It’s a lesson for a lot of people that watched us that it isn’t always so obvious as players leave and you fall apart. It just didn’t happen. We didn’t feel like it was going to happen."

There may be no greater example of what Carroll is talking about than the play the Seahawks have received from Geno Smith — the "other" quarterback this Sunday at Allianz Arena.

Smith won the starting job after Russell Wilson was traded to the Denver Broncos. Already this season he’s thrown a career-high 15 touchdown passes — five more than Brady after nine games.

"He’s done everything exactly the way we like to see it," Carroll said.

Smith hadn’t been a full-time starter since 2014 with the New York Jets, but the underdog days will be over if he keeps racking up wins. He attributed his re-emergence to "a mixture of talent and mental stability."

"If you make it to the NFL, you’ve got something. You’ve got to have some type of talent," he said. "It’s really up to the opportunity and what you do with that opportunity."

A likeness of Smith was displayed on Munich’s Olympic Tower — similar to Seattle’s Space Needle — in a promotion for the game and further evidence of the quarterback’s growing celebrity.

"It’s definitely an honor for me and my family, and on behalf of the Seahawks, you could have picked a bunch of guys on this team who could have been that guy," he said.

Seahawks depart for Germany ahead of game with Buccaneers

After an afternoon practice the Virginia Mason Athletic Center on Wednesday, the Seattle Seahawks headed to the airport for their 10-hour flight to Munich, Germany ahead of this Sunday's game against the Tampa Bay Buccaneers.

Smith credited Bucs coach Todd Bowles — who coached the Jets in 2015 when the quarterback was sidelined after being punched by a teammate — for having his back.

"He was always a guy who I felt like was in my corner," he said. "Obviously, that was during a tough time in my NFL career. Coach Bowles helped me through a lot of those situations."

Smith endorsed the use of a wristband to help facilitate play-calling. It became a topic of interest after Carroll this week suggested that "there was resistance to that" in the past — without citing Russell Wilson by name. The Broncos quarterback dismissed the comment.

Use of the wristband, Smith said, makes it easier — noting that some play calls involve 10 words.

"It just takes time for all of that to happen. You go right to the wristband, kind of smooth out the operation, makes things faster," he said.

Seahawks offense showing ability to close out games in wins over Giants, Cardinals

Not only is the offense of the Seattle Seahawks showing it can score points consistently each week, they're now starting to show they can be closers as well.

Seahawks safety Quandre Diggs was one of several Seahawks who wore a Bayern Munich scarf during their press conferences after a low-stress practice that drew the interest of a dozen or so teenagers behind a fence that separates the campus from a residential area. The soccer powerhouse plays at Allianz Arena.

"I hope it’s loud and crazy. I’ve watched soccer matches, so I hope they bring that type of energy," Diggs said.

iggs said if he might do a "soccer slide" — when players slide on their knees near the corner flag to celebrate a goal — if he gets an interception. That would be no easy task as Brady has thrown just one this season.

Linebacker Aaron Donkor of Germany won’t play on Sunday as he and the team had hoped.

Carroll said the Seahawks went "all the way to the top of the chain" in an attempt to get Donkor, who joined Seattle through the league’s International Player Pathway program, moved from the practice squad to the active roster.

"We just couldn’t get it OK’d," Carroll said of the logistics.

Instead, Donkor will be the flag bearer leading the the team out of the tunnel. He expects to be carrying the German flag but said he "would love" to carry the U.S. flag as well.