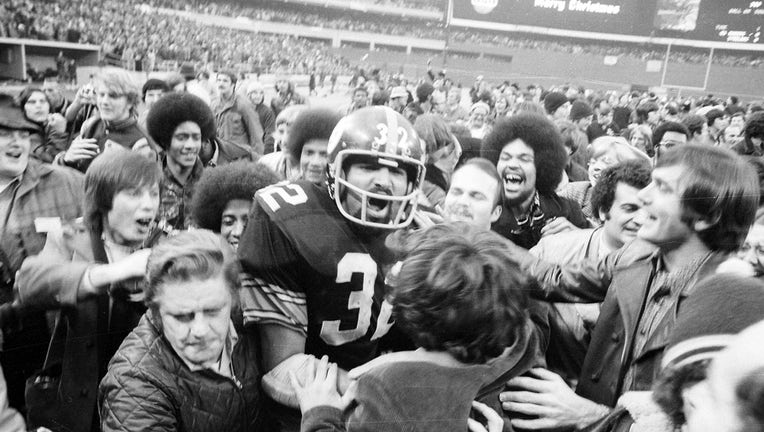 PITTSBURGH - And it came to pass — actually, quarterback Terry Bradshaw came to pass, but bear with us. This is a story about football, culture and religion, so it seems right to begin with some biblical phrasing.

Thus, Bradshaw barely got off the pass, which was deflected in a collision between defender and receiver. Everyone thought the game was over except a hustling fullback, Franco Harris. He made an improbable shoestring catch and raced into the end zone, securing the Pittsburgh Steelers' first-ever playoff win, the start of a long dynasty.

That was 50 years ago this Friday, on Dec. 23, 1972. But even though the NFL has officially designated it the greatest play in league history, it was bigger than that.

"Dec. 23 will henceforth be celebrated in Pittsburgh as the Feast of the Immaculate Reception," legendary local sportscaster Myron Cope proclaimed.

He got the idea from a caller whose boyfriend had coined the name in a barroom victory celebration — putting a twist on the recently passed Catholic Feast of the Immaculate Conception, which marks the belief that the Virgin Mary was conceived without sin.

The coinage was as durable as it was instant, "using religious terminology to almost mythologize a sporting event," said Anne Madarasz, chief historian and director of the Western Pennsylvania Sports Museum. 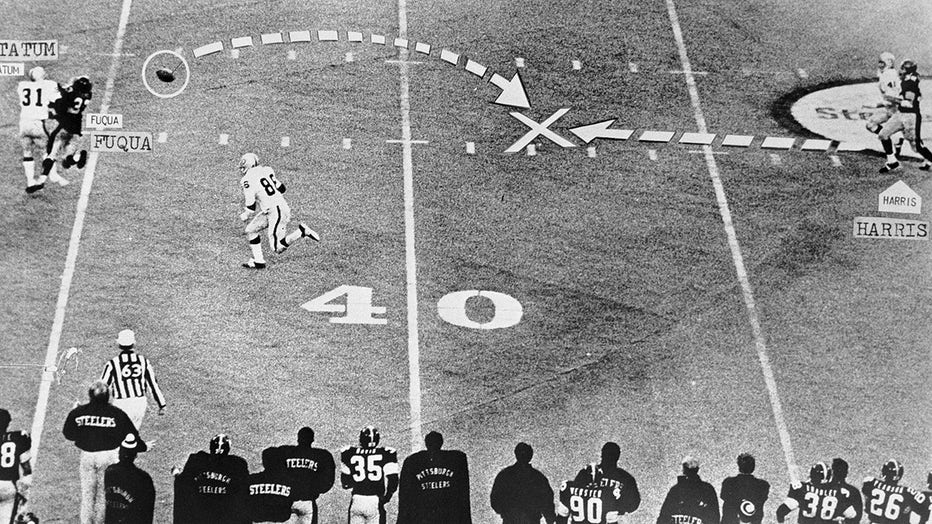 Original caption: With 22 seconds left in the Steeler-Raider playoff game, Steeler quarterback Terry Bradshaw threw a 4th down desperation pass intended for John "Frenchy" Fuqua. When the ball was deflected by Raider Jack Tatum it traveled 7 yards in

The Immaculate Reception crystallized the rise of the Steelers — even as their namesake industry was on the decline, as was the Pittsburgh of compact immigrant neighborhoods with multiple ethnic Catholic parishes.

By 1980, just as the Steelers were celebrating their fourth Super Bowl victory, Pittsburgh’s famed steel industry was moving from decline to all-out collapse. Many young people moved out of the demoralized region in search of jobs across the country (helping build the Steelers' national fan base, by the way).

Still, those who left and those who stayed had the memory of a play called immaculate — a story with a never-give-up moral.

"This was our cultural rallying point," said the Rev. Lou Vallone, a retired Catholic priest of the Diocese of Pittsburgh.

"It’s what kept us going as we saw our immigrant culture begin to dissipate, as the economics went down, the steel mills closed, as people moved out into the suburbs, people moved out of the area," said Vallone. He used to preside at Masses at St. Peter Church, the parish nearest the stadium, where the congregants included many game-day tailgaters, clad in Steelers' black and gold. 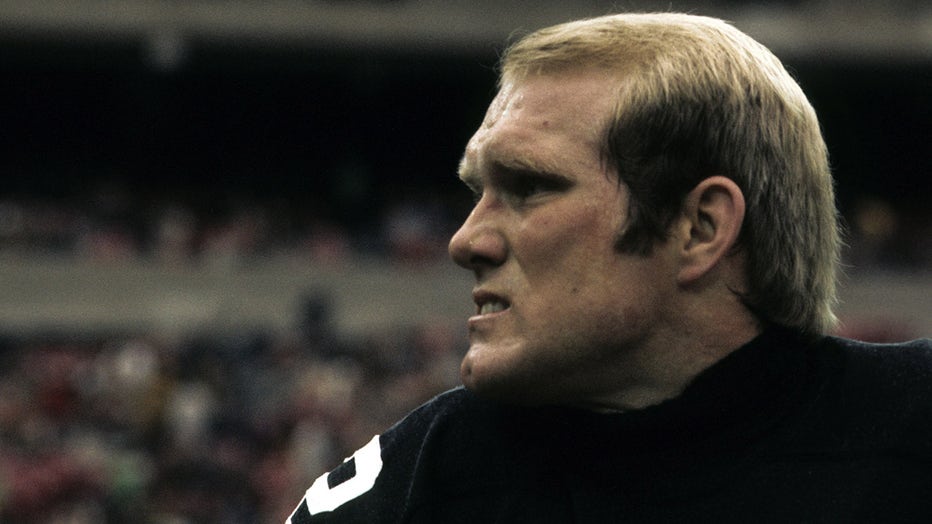 Quarterback Terry Bradshaw of the Pittsburgh Steelers takes a break during the Steelers' 13-7 victory over the Oakland Raiders in the 1972 AFC Divisional Playoff Game on December 23, 1972 at Three Rivers Stadium in Pittsburgh, Pennsylvania. (Photo by

The city's and region's population decreased in the years after the catch. The ranks of Catholics — 40% of the region's population in 1972 — dropped by about a third. Many ethnic and other parishes have closed or merged, and often merged again. A church named for the Immaculate Conception recently closed.

But the mythology of the Immaculate Reception endures.

At the Pittsburgh International Airport, a statue immortalizing Franco Harris at the moment of his catch stands next to another historical figure, someone named George Washington.

And where Three Rivers Stadium once stood — now a sea of parking spaces near the Steelers' current stadium — there's a monument to the Immaculate Reception. You might call it a shrine.

It includes a marker where fans who are so inclined can put their foot in the exact spot where Harris' foot landed.

And as with the Immaculate Reception, people have been putting themselves in Harris' cleats since they first poured onto the field in 1972, joining him in an end zone celebration.

"It’s not just him crossing the goal line, it’s the team and the city," Madarasz said. 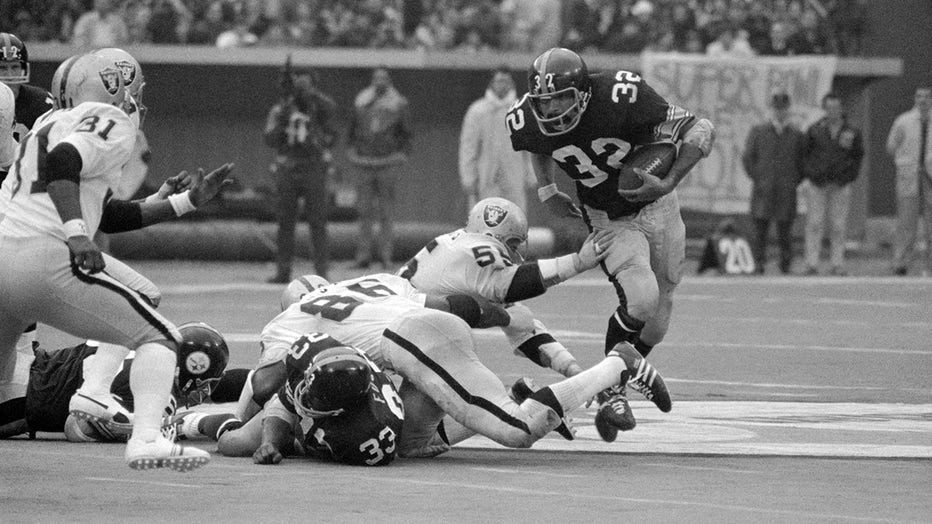 Original caption: Steeler running back Franco Harris picks up a couple of yards in the 2nd quarter before being pulled down by Oakland Raiders Gerald Irons (86) and Dan Conners (55). (Bettmann via Getty Images)

It’s hardly the only Catholic connection to the Steelers. "There was nobody more Catholic than the Chief," Vallone said of the team's legendary founder, Art Rooney. And for decades, the team has practiced at St. Vincent College, a nearby Catholic school and home to a Benedictine abbey.

While the Immaculate Reception has a Catholic name, it also has an element of interfaith cooperation.

Sportscaster Cope was Jewish. Years later, he addressed the perennial controversy of whether the catch was even legitimate under NFL rules (depending on whether the ball touched the defender or receiver before bouncing to Harris). In a New York Times essay, he posed an only-in-America question:

It was indeed, he insisted, after studying the film. 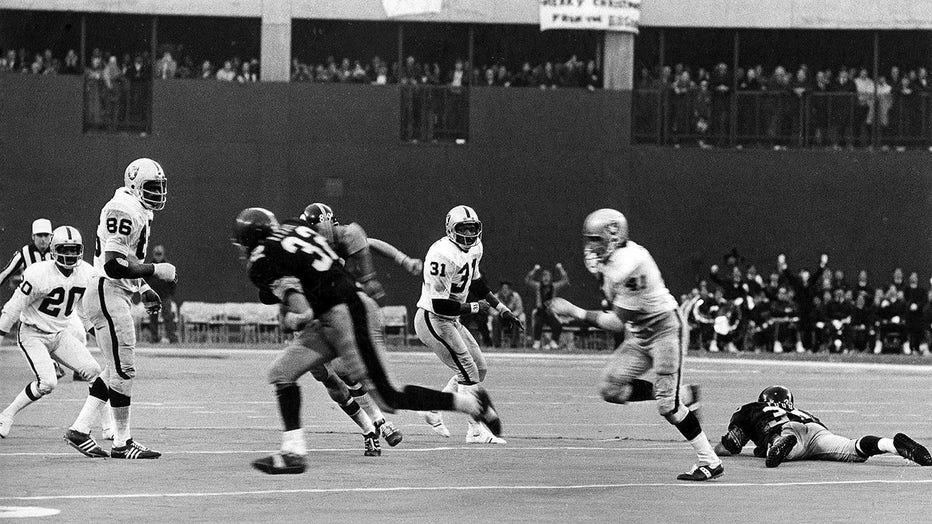 Religious and football iconography have merged long before praying coaches had their day in the Supreme Court this year. Quarterback Doug Flutie’s 1984 "Hail Mary" touchdown pass to Gerard Phelan gave a legendary victory to a Catholic school, Boston College, over the University of Miami.

"Touchdown Jesus," a large mural of Christ with his arms raised, is a landmark near the stadium of Notre Dame University, the Catholic school that long ago fielded the apocalyptic backfield, the Four Horsemen.

The Oakland Raiders, while on the losing end of the Immaculate Reception, may have benefited from divine help another time, if nicknames are to be believed. They won a 1978 game on a "Holy Roller" fumble that took a long, winding route through running back Pete Banaszak’s hands toward a teammate in the end zone. "I believe in the Big Guy," Banaszak later said. "He was there."

Vallone hears that kind of talk a lot, from fans as well as players. He's even got a homily to go with it.

"If you want to believe God’s on your side in a football game or a soccer game, that’s fine, as long as you live your life on God’s side," Vallone said.

Fans tailgating near the Immaculate Reception monument before the Steelers' Dec. 11 game against the Ravens could readily recite the moment-by-moment details of the play. That includes those who saw it live, and those who weren't even born then. 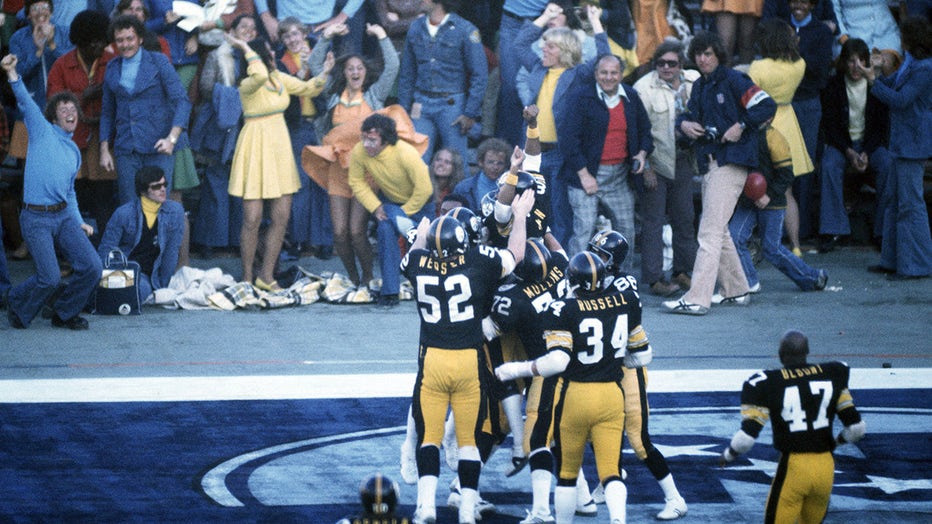 The Pittsburgh Steelers gather at the end zone to congratulate Franco Harris during Super Bowl X against the Dallas Cowboys at the Orange Bowl on January 18, 1976 in Miami, Florida. The Steelers defeated the Cowboys 21-17. (Photo by Focus on Sport vi

The 1972 game was subject to local blackout rules. But Buster Boots, living northwest of Pittsburgh in Ellwood City, recalled his family using a large antenna to catch the broadcast "on a big old 25-inch RCA TV with a picture coming in from Cleveland."

After the play, "we were going nuts," he recalled. "We got to see it live."

John Michael of nearby Aliquippa said he saw the Immaculate Reception in person. He said there's a good reason for the name.

"Probably because of Pittsburgh, you know," he said. "A lot of ethnic groups, a lot of religions, a lot of churches and a lot of love."