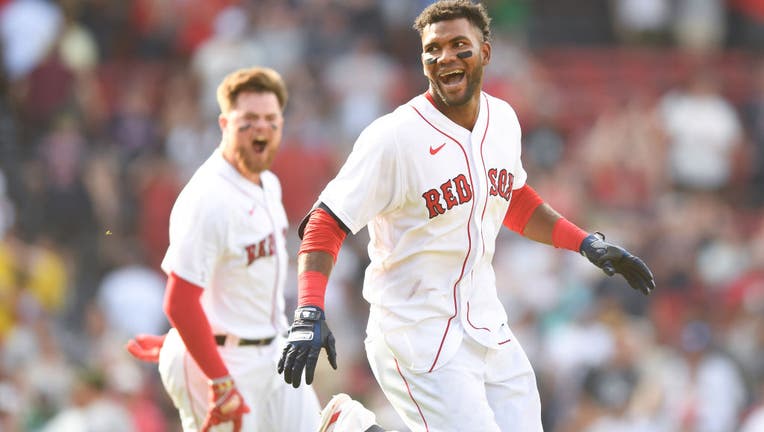 BOSTON, MA - MAY 22: Franchy Cordero #16 of the Boston Red Sox celebrates after hitting a walk-off grand slam in the tenth inning against the Seattle Mariners at Fenway Park on May 22, 2022 in Boston, Massachusetts. (Photo by Kathryn Riley/Getty Imag

BOSTON - Franchy Cordero hit a grand slam with two outs in the bottom of the 10th inning, lifting the surging Boston Red Sox to an 8-4 victory over the Seattle Mariners on Sunday.

Trevor Story continued his recent power surge with his fifth homer over the Green Monster in four days and Christian Arroyo added a solo shot for Boston, which posted its season-high fifth straight victory and completed a four-game sweep over Seattle.

The Red Sox trailed 4-3 when pinch-hitter Christian Vázquez singled against Andrés Muñoz (1-2) in the 10th, advancing automatic runner Bobby Dalbec. After Kiké Hernández hit a tying single, Vázquez was thrown out at the plate by right fielder Dylan Moore on Rafael Devers’ single, a play upheld by review.

Following an intentional walk and Story’s flyout, Cordero won it with his drive to right on 0-2 pitch. Seattle left fielder Jesse Winker and center fielder Julio Rodríguez stood out in the field in disbelief for a while before slowly walking off as the Red Sox celebrated at home plate, spilling over toward their dugout.

Adam Frazier had a go-ahead single in the 10th inning for Seattle after Eugenio Suárez’s homer tied it with two outs in the ninth.

Frazier also had a two-run homer for the Mariners, who have lost six of seven and 19 of 25.

With thunder and lightning off to the first base side, Frazier lined an RBI single to center against Jake Diekman (1-0), who earned the victory.

Suárez homered into the Monster seats against Hansel Robles.

The Red Sox nearly wasted a solid outing from Nathan Eovaldi, who rebounded from a historically bad outing by striking out 11 while allowing two runs and four hits over 6 2/3 innings.

He became just the third pitcher in MLB history to get tagged for five homers in an inning during a loss to Houston last Tuesday, joining Toronto’s Chase Anderson (Sept. 17, 2020, vs. Yankees) and Milwaukee’s Michael Blazek (July 28, 2017, vs. Nationals).

Story lined a 94 mph fastball off Logan Gilbert that barely cleared the top of the 37-foot Monster in the sixth, landing in the first row to make it 3-2.

Story finished the series with the five homers and 13 RBIs, going deep three times in the opener and hitting a grand slam on Friday.

Frazier hit a flyball that hooked around the Pesky Pole.

Inserted into the lineup when J.D. Martinez was a late scratch with back spasms, Arroyo hit the first pitch off a billboard above the Monster seats in the second.

Mariners: Placed 2B Abraham Toro on the 15-day injured list with a sprained left shoulder he suffered hitting the ground after colliding with right fielder Adam Frazier in Saturday’s loss. They were chasing a pop in shallow right that Toro caught. … Gilbert was hit on the back of the right leg by Kevin Plawecki’s grounder for a single but didn’t need a visit from the trainer.

Red Sox: OF Alex Verdugo was out after leaving Saturday’s game with flu-like symptoms, but manager Alex Cora said he tested negative for COVID-19.

With temperatures unseasonably in the 90s, the Fenway Park organist had a sense of humor before the first pitch, playing ‘Let it Snow!’ and a few songs later adding ‘I’m Dreaming of a White Christmas.’

Winker struck out swinging to end the fourth and flung his bat to the ground in disgust.

Red Sox: Off Monday before beginning a three-game series in Chicago against the White Sox Tuesday. RHP Nick Pivetta (2-4, 4.22) is slated to start for Boston.