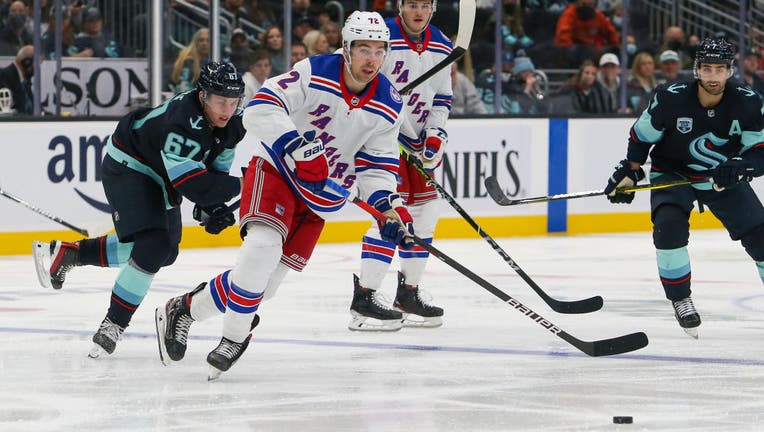 SEATTLE, WA - OCTOBER 31: New York Rangers center Filip Chytil (72) controls the puck in the third period during an NHL game between the New York Rangers and the Seattle Kraken on October 31, 2021 at Climate Pledge Arena in Seattle, WA.(Photo by Jaco

The Rangers shook off a long, lethargic stretch to win their franchise-record fifth road game in October and improve to 6-2-1. It’s the most road wins New York has had in the first nine games of a season, and largely due to Shesterkin’s ability to turn away shots.

"It’s pretty repetitive when we talk about it," Fox said. "We can sing his praises for days. I mean, he keeps us in every game and you never feel like you’re out. It’s a tie game and he keeps it that way."

Chris Kreider and Barclay Goodrow also scored for the Rangers. Kreider grabbed a piece of Rangers history with his goal at 3:38 in the first period, tying Phil Esposito for 15th-most goals in franchise history with 184.

Jordan Eberle scored for the Kraken, and Philipp Grubauer made 14 saves. They dropped to 3-5-1.

Goodrow sent a pass across the ice off the boards to Kreider, who rocketed a slapshot at Philipp Grubauer from 34 feet out on the rush. It was Goodrow’s first assist of the season.

From there, Seattle picked up the intensity, but Shesterkin turned aside several opportunities as his team struggled. The Kraken outshot the Rangers 13-2 in the second period and won 15 of 18 faceoffs. It was so lopsided, that at one point Shesterkin was forced to turn aside three shots after losing his stick behind the goal.

He was so dominant it took a bit of a trick shot by Eberle to tie the game later in the period. Eberle took a wonky pass off the boards from Jaden Schwartz and caught Shesterkin off guard with a spinning back-hander with 6:14 left in the second.

That ended a stretch of more than 95 minutes without Shesterkin allowing a goal.

The Russian goalie, who speaks limited English, said the key to playing without a stick is to focus on the puck, much like he did the rest of the game.

"I faced some tough shots, but every time I (am able to) see the puck, it was easy for me," Shesterkin said.

Fox scored the go-ahead goal from the slot with eight minutes left in the third period on a centering pass from Artemi Panarin. Goodrow added an empty-net goal, his third of the season, with about two minutes left.

New York killed four power plays in the win, and have killed 22 of the last 23 against the man advantage.

Seattle outshot New York 32-18 in the game. The loss snapped Seattle’s two-game win streak, but left the expansion team feeling as if it has made progress, going 2-2 during its first homestand.

"I think everybody’s heading in the right direction," Grubauer said. "Obviously, the first couple of games I think everybody’s coming from different systems. … So we’ve actually played a lot of minutes together and you have a certain standards that we have to match every day or every game, then sometimes set the bar a little bit higher. Everything’s coming together."

NOTES: Rangers coach Gerard Gallant scratched D Nils Lundkvist from the lineup without a detailed explanation, saying, "We just thought we’d dress what we thought was the 20 best players." ... F Max McCormick, recalled Saturday from Charlotte of the AHL after Seattle put F Mason Appleton on the injured reserve, played his first shifts for the Kraken on Sunday. He was forced into action after the team put F Jared McCann in COVID-19 protocol on Sunday with assistant coach Paul McFarland. … Kreider has scored goals in three straight games played on Halloween.