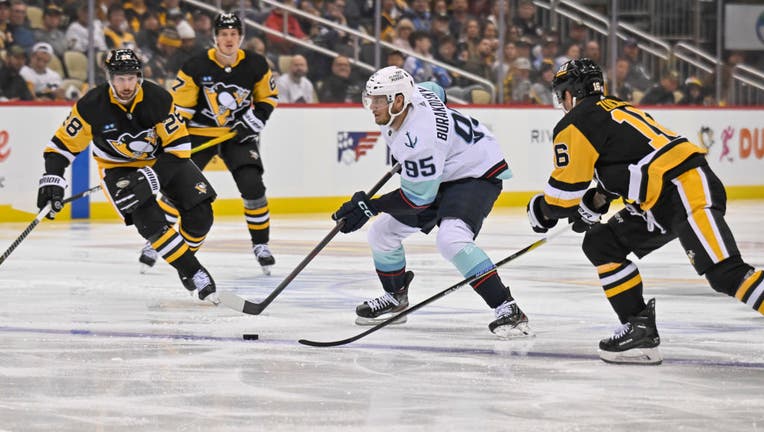 SEATTLE - A four-game winning streak has carried the Seattle Kraken toward the top of the standings in the Western Conference ahead of a six-game homestand beginning Tuesday night against the Nashville Predators.

A perfect 3-0 road trip was capped on Saturday with a 3-2 win over Sidney Crosby and the Pittsburgh Penguins. It was the second time in eight days the Kraken had taken down Pittsburgh after a 3-1 win at home kickstarted the current winning streak.

Seattle currently sits in third place in the West with 16 points (7-4-2) through their first 13 games of the season. They rank fourth in the conference in points percentage and are second in the Pacific Division behind only the Vegas Golden Knights.

"We’re feeling good," left winger André Burakovsky said. "We just had a really good road trip. We’re feeling good about ourselves. We still have a lot of areas where we can get better and we will be over time here."

The Kraken have started playing complete hockey. They’re getting improved goaltending, better defense in front of the net, and are scoring across all four forward lines.

Martin Jones has been a steadying presence in net for Seattle. During his three wins during the streak, he’s saved 89 of 92 shots for a .967 save percentage.

"For me, it's his consistency," head coach Dave Hakstol said of Jones. You know, he's a real calm presence out there. He's a big goaltender so he's not overactive. But ultimately, he's had that calming presence for our group and in some of the wins of late it's been about that timely, big save. He's provided that for us. Making all the saves you're supposed to, but the timely big save has been there for him and that's provided a lot to our group."

The Kraken rank ninth in the NHL in goals per game (3.46) and power play percentage (26.1). They’ve allowed the third-fewest shots against from opponents (27.7/game) and have posted a 6-1-1 record against teams that were in the playoffs last season.

"If anything it should give us confidence that we're one of the best teams in the league," right winger Jordan Eberle said. "You want to feel good about yourselves and understand that we have a good team here. We can do what we want right now. But it's early."

Seattle had to rally back from a 4-2 deficit in Calgary last Tuesday after a pair of quick goals from the Flames forced the Kraken to come from behind. A power-play goal from Daniel Sprong cut the lead to one and Yanni Gourde beat Dan Vladar on a short-handed chance to tie the game. Matty Beniers then delivered the game-winner to complete the comeback and earn the team’s first ever win against the Flames.

Then after a 4-0 mauling of a banged up Minnesota Wild team, the Kraken had to grind out another win in Pittsburgh. Brandon Tanev beat Tristan Jarry with 3:39 left to lift Seattle to a fourth straight win.

"That's the difference between maybe making the playoffs and not making the playoffs," Eberle said of winning games like these. "The line between winning and losing this league -- it may look like it's a lot but it's really not. It's a thin, thin line.

"I look at our roster and I think upfront we have some of the best depth that I've played with in a long time. We have four lines that are capable of scoring. … You have guys chipping in every night and then on top of that, teams just can't really match against that. So as long as we continue to play the formula that we have, we'll be a good team."

The Kraken penalty kill is now finding its footing as well. Despite ranking just 23rd in the league at 73.8 percent, Seattle has killed off its last 11 penalties successfully during their winning streak.

"We're playing as a team and everyone is contributing," Gourde said. "It's really fun to play that way. All four lines, all (six) D, Jonesy's been unbelievable in net. So it's been really team wins since the beginning of the year."

The Kraken have 19 different players that have scored goals for them so far this season, which is the most in the NHL. Rookie Shane Wright is the only skater to have played for Seattle this season yet to score a goal, though he's played an average of just over eight minutes a game in the seven games he's seen action this year.

Oliver Bjorkstrand, who led all current Kraken members in goals with 28 last season with the Columbus Blue Jackets, still hasn't gotten going yet this year either. He has just one goal scored in the team's season opener in Anaheim through 13 games.

"It's just hard for teams to match up against that, especially when you get in the playoffs.," Eberle said. "I've always felt like the teams that are really tough to play against are the ones that have that depth. Your first or second line, they're not going to be going every night and if you get contributions up and down the lineup, you're always going to have a chance in every game."

The strong start to the year has put the Kraken firmly in the playoff discussion. While there are still 69 games left to be played, it gives Seattle some cushion to work with should a lull comes or injuries pile up during the year. Through this point in the season last year, the Kraken were just 4-8-1 (9 pts) and were in the middle of an eventual six-game losing streak that effectively put Seattle out of contention prior to Thanksgiving.

This year, the Kraken are eyeing a run at their first playoff berth in team history.

"We're finding ways to win, especially over the last couple of weeks here. We need to see the continuation of that," Hakstol said.