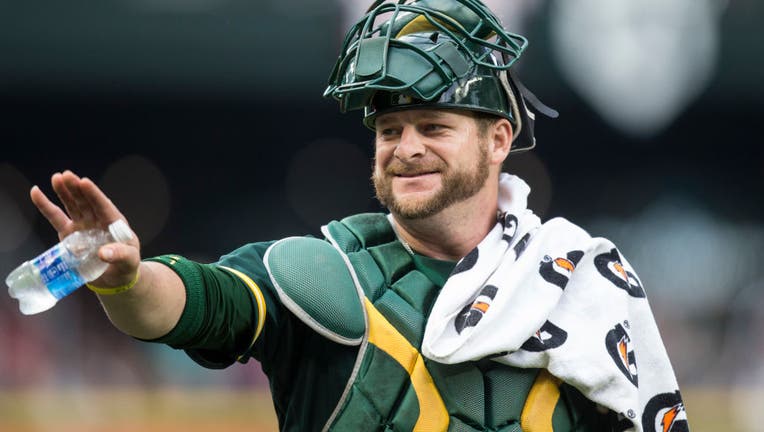 SEATTLE, WA - MAY 17: Catcher Stephen Vogt #21 of the Oakland Athletics waves to fan before a game against the Seattle Mariners at Safeco Field on May 17, 2017 in Seattle, Washington. The Mariners won the game 4-0. (Photo by Stephen Brashear/Getty Im

SEATTLE - Retired catcher Stephen Vogt is joining the Seattle Mariners as a bullpen and quality control coach, fulfilling his goal to go right into coaching.

The 38-year-old Vogt called it a career after his 10th major league season in 2022. He will join the staff of manager Scott Servais, whose club returned to the playoffs for the first time in 21 years last season.

"I am beyond excited to be joining the Mariners organization and major league coaching staff," Vogt told The Associated Press. "This next chapter of my career is one I am ready for and thrilled to be beginning in Seattle."

Coaching has long been his calling. From Bruce Bochy and Craig Counsell to more recently his A’s manager Mark Kotsay, many have vouched for Vogt’s ability to one day become a manager. Now, he’s taking the first step on that path.

The Seattle Mariners selected right-handed pitcher Chris Clarke from the Chicago Cubs organization in the Rule 5 Draft on Wednesday.

Vogt was a career .239 hitter with 82 home runs and 313 RBIs with Tampa Bay, Oakland, Arizona, Milwaukee, San Francisco and Atlanta.

He began his big league career with an 0-for-32 hitless stretch that started with the Rays and ended with the A’s in 2013. A few months later, in October 2013, he produced his first career game-winning hit with a single off Rick Porcello in the playoffs for a 1-0 win against the Tigers that sent the best-of-five AL Division Series back to Detroit tied at 1.

After striking out twice against Justin Verlander, Vogt fouled off seven pitches in a 10-pitch at-bat that ended the seventh with his third K. Vogt’s next time up, he lined a bases-loaded single into left-center that won the game.

A chant of "I believe in Stephen Vogt!" emerged.

For the journeyman Vogt, this is a tremendous opportunity to stay close to home: He and wife Alyssa live in the Washington state capital of Olympia with their three children.

The Seattle Mariners were named the 2022 MLB Organization of the Year on Thursday by Baseball America.

"It’s amazing to have the ability to not move the family for the first time in 16 years," he said. "That is another perk of an already great opportunity to be coaching with the Mariners."

Seattle coach Trent Blank will move from bullpen duties to working from the dugout as director of pitching strategy. The remainder of the coaching staff remains the same.

"I’m thrilled that we’re able to return our entire coaching staff for the 2023 season," Sevais said. "Our coaches did a tremendous job helping our players improve and prepare every day in 2022, and they deserve a lot of credit for the success we had."