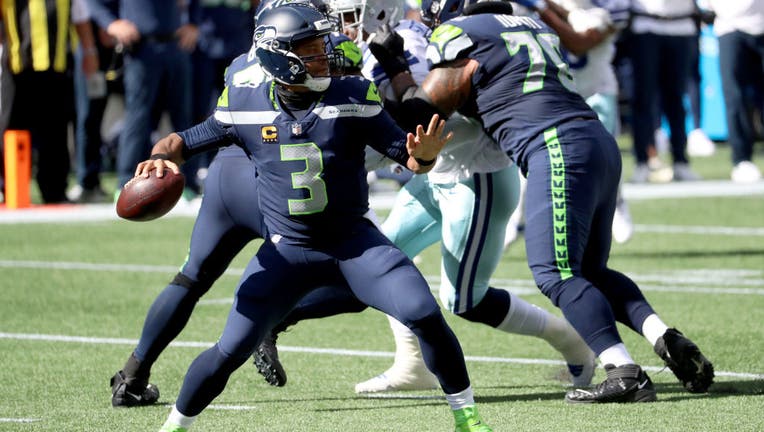 SEATTLE, WASHINGTON - SEPTEMBER 27: Russell Wilson #3 of the Seattle Seahawks looks to throw a pass against the Dallas Cowboys during the first quarter in the game at CenturyLink Field on September 27, 2020 in Seattle, Washington. (Photo by Abbie Par

SEATTLE - For the second time in the first three weeks of the season, Seattle Seahawks quarterback Russell Wilson has been named NFC Offensive Player of the Week.

The Seattle Seahawks held off the Dallas Cowboys 38-31 on Sunday in another impressive performance by Wilson.

Wilson has 14 touchdowns so far this season which is the most in league history through the first three games.

GET THE Q13 FOX APP FOR SEAHAWKS NEWS AND ALERTS

Wilson became the fifth player with back-to-back games with at least five TD passes. He's also the first QB to have at least four TD passes in each of the first three games.

The Seahawks make the journey to Florida this week to face the Miami Dolphins in a game that can be seen on Q13 FOX, official TV partner of the Seahawks. Kickoff is at 10:00 a.m. PDT.