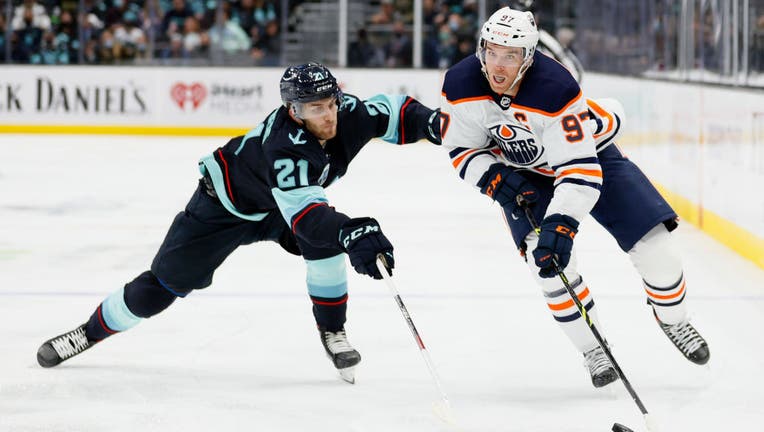 SEATTLE, WASHINGTON - DECEMBER 18: Connor McDavid #97 of the Edmonton Oilers controls the puck against Alex Wennberg #21 of the Seattle Kraken during the third period at Climate Pledge Arena on December 18, 2021 in Seattle, Washington. (Photo by Step

SEATTLE - Warren Foegele scored twice, including the go-ahead goal in the third period, and the Edmonton Oilers beat the Seattle Kraken 5-3 on Saturday night.

Evan Bouchard and Connor McDavid each had a goal and an assist, and Colton Sceviour also scored for the Oilers, who have won two straight after a six-game losing streak. Leon Draisaitl had three assists and Stuart Skinner had 14 saves.

It was Foegele’s first multi-goal game of the season.

"He’s such a quick, up-tempo player," Oilers associate coach Jim Playfair said. "He went to their net hard and was rewarded for it."

Foegele’s tiebreaking goal with about 11 minutes left to play was initially waved off as he fell into Driedger as the puck went into the net. After review, it was determined that he was pushed into the goalie, negating the interference call.

"I knew I wasn’t in the paint, I knew I got pushed in there, but you never know with some of these decisions," Foegele said. "Just try to get to the net — good things happen when you go to the net."

Ryan Donato, Jared McCann and Carson Soucy scored for Seattle, and Jordan Eberle had two assists. Chris Dreidger had a season-high 36 saves as the Kraken fell to 1-4-1 in their last six games.

"It was a pretty tight hockey game," Kraken coach Dave Hakstol said. "We couldn’t get a push in the second and third periods. We didn’t get through the neutral zone and we didn’t get any type of a forecheck going, so there was no momentum to be found for us."

The Kraken opened a 2-0 lead early in the game. Donato opened the scoring about four minutes in, giving him a goal in his third straight game — matching his career high.

McCann had the second goal about five minutes later, when Eberle’s pass from behind the net found him right in front. It was McCann’s 12th goal, tying him with Eberle for the team lead.

The Oilers tied it late in the first period. Evan Bouchard got the first with about seven minutes to go on a shot from the point that bounced off the glove of Driedger before finding the net.

Edmonton’s league- best power play tied it with three minutes left in the first, as Foegele hammered in a loose rebound to make it 2-2.

"Whatever the score is you’ve still got to play the right way," Foegele said. "We were continuing to attack, and it’s not fun to play against a team that’s constantly attacking and playing hard. You keep pounding that rock and the rock’s going to chip."

The teams traded goals in the second period. Sceviour scored with seven minutes to go, and Soucy it again with 3 1/2 minutes left in the second.

McDavid had an empty-net goal in the final minute.

NOTES: Seattle’s Brandon Tanev took a hit against the boards with about four minutes left in the game, and stayed down on the ice in pain. When he skated off, he was helped off the ice and did not put weight on his right leg. Hakstol said he didn’t have an update on Tanev’s condition after the game. ... Earlier Saturday, Oilers F Jesse Puljujarvi was placed in COVID-19 protocol, a day after F Ryan Nugent-Hopkins and defenseman Duncan Keith. The Oilers now have five players and head coach Dave Tippett in COVID-19 protocol, as Devin Shore and Ryan McLeod have already missed games. ... Before the game, Seattle announced D Jamie Oleksiak was unavailable due to COVID protocol. The Kraken’s Colin Blackwell, Yanni Gourde, and Riley Sheahan were already on the COVID-19 list.