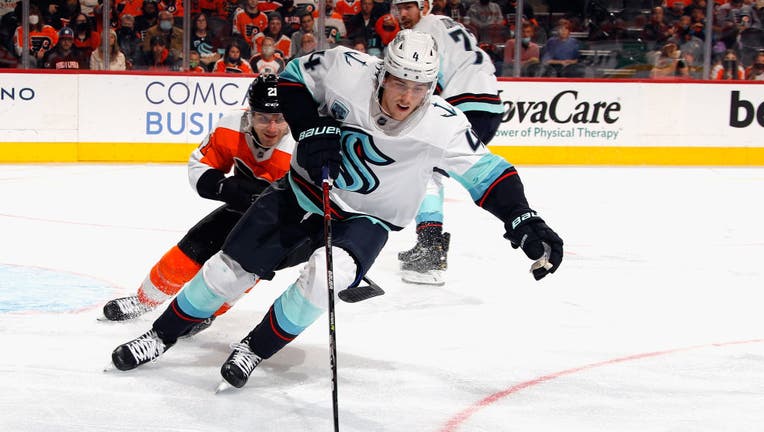 PHILADELPHIA, PENNSYLVANIA - OCTOBER 18: Haydn Fleury #4 of the Seattle Kraken skates against the Philadelphia Flyers at the Wells Fargo Center on October 18, 2021 in Philadelphia, Pennsylvania. The Flyers defeated the Kraken 6-1. (Photo by Bruce Ben

PHILADELPHIA - The final months of Dave Hakstol’s time coaching the Flyers came with angry fans chanting "Fire Hakstol! Fire Hakstol!" With this kind of lopsided score in his return, Philly fans might just throw out a welcome mat.

Claude Giroux and Travis Konecny scored, Carter Hart stopped 24 shots and the Flyers spoiled Hakstol’s return to Philadelphia with a 6-1 win over the Seattle Kraken on Monday night.

"We were out of sync, we couldn’t put ourselves back on the right track," Hakstol said. "And that’s the end result."

Carson Soucy scored the first goal in four games for a Kraken defenseman in team history. The previous three were each decided by one goal.

Hakstol was hired by the Flyers in 2015 right out of a college job at North Dakota and fired in December 2018 after he went 134-101-42, coaching the third-most games in franchise history behind Fred Shero and Mike Keenan – and the most for the Flyers without winning a playoff series.

He couldn’t win in his return with Seattle, either.

The Flyers scored three times in the first period and treated the Kraken like a run-of-the-mill expansion franchise, not as an instant contender, such as the Vegas Golden Knights.

Gritty even got in on the fun and pie-faced some dude in an octopus costume, his tentacles waving in the air like eight green flags of surrender.

"We’ve got a good group here. We have fun at the rink," Hart said. "But we know when it’s time to go to work."

Hakstol caught up with some of his former players at the morning skate and had brief conversations before moving on to prep his current team. Only three years later, just nine players remain from his final game in Philly.

"It’s different seeing him on a different team when you had him for so long," Konecny said. "It’s pretty cool for him to have that job now and step in as a head coach again. Hopefully, it goes well for him, just not tonight."

Giroux scored a one-timer off a give-and-go for his second goal of the season and Konecny buried one from the slot. Brassard scored his first goal as a Flyer off his own rebound, and soon the only thing expanding in Seattle was its deficit.

Ellis added his first goal as a Flyer on a shot that not even Shawn Kemp could block and it was 4-0 in the second. Braun made it 5-0 and chased Kraken goalie Philipp Grubauer with 11:11 left in the second.

"We’ve got a lot of great memories here and good friends, and obviously as you get to this time of day it kind of flips right to the competition of the game tonight," Hakstol said before the game.

Hakstol moved to Toronto as an assistant and is now tasked with trying to move the needle in Seattle. The 53-year-old Hakstol was a surprise choice as Seattle’s first coach, at least to those outside the front office.

Hakstol always said he wanted to coach again, and the Kraken are counting on him to have the success he failed to find in Philly.

Flyers center Kevin Hayes declined comment in the wake of the Massachusetts state medical examiner report that his brother, former NHL player Jimmy Hayes, died in August from an accidental overdose of fentanyl and cocaine.

Kevin Hayes, out as he recovers from abdominal surgery, continues to skate with the team and stay involved until he can return.

"Kevin has been in everything," coach Alain Vigneault said. "He’s been in the gym, doing his rehab, he’s been working. He’s been in all our meetings. He’s been a real part of this team. He’s wanted to stay close and he’s wanted to help the new players come in."

Jimmy Hayes’ widow, Kristen, wrote on Instagram she was "shocked and heartbroken beyond words. I choose to remember my husband and the boys’ father by the enormous love and joy he brought us and so many others." She said of his drug use, "this battle does not define him."

Flyers center Nate Thompson got the better of Nathan Bastian in a late scrap that had the crowd going wild.

"I wouldn’t expect anything less from our fans," Konecny said.