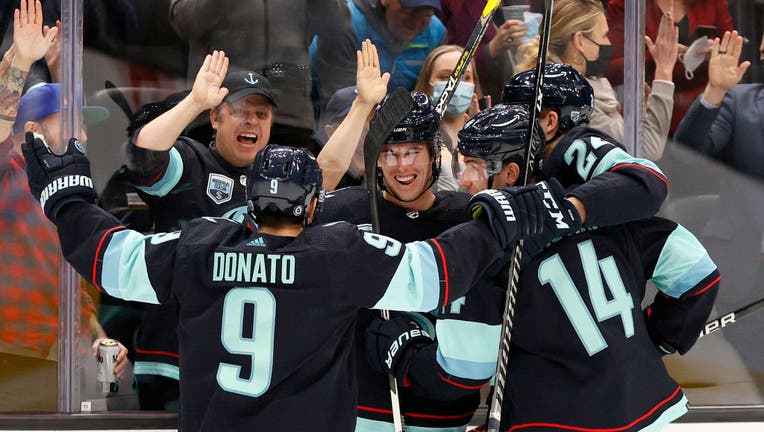 SEATTLE, WASHINGTON - OCTOBER 28: The Seattle Kraken celebrate a goal by Haydn Fleury #4 during the game against the Minnesota Wild at Climate Pledge Arena on October 28, 2021 in Seattle, Washington. (Photo by Steph Chambers/Getty Images)

SEATTLE - Coming into the Seattle Kraken’s debut season, the team knew getting goals from all over the ice was going to be important for success.

"I think it’s a key part of our team," Fleury said. "I think all the defensemen from our team have the capabilities to help contribute and I really think if we’re going to be a successful team I think we have to do that."

Fleury had the first two-goal game of his career and Brandon Tanev added his sixth of the season into an empty net, as the Kraken beat the Minnesota Wild 4-1 on Thursday night.

Seattle won its second straight — and the most impressive of its three victories so far — in handing Minnesota just its second loss. And it came after a sluggish start by the Kraken that saw them fall behind within seven minutes.

"They just got going," Seattle coach Dave Hakstol said. "Again, that’s good veteran leadership that has a realization of what’s happening at that point in the game and knows what needs to happen."

Fleury scored late in the first period to pull Seattle even at 1-1 and his wraparound goal in the second gave the Kraken the lead. Tanev and Mark Giordano both scored empty net goals after Minnesota pulled Cam Talbot. Giordano banked his shot off the boards from his own defensive zone for his second of the season.

Ryan Hartman scored his third goal of the season off a great feed from Kirill Kaprizov early in the first period, but Minnesota was stymied the rest of the way thanks to Seattle goalie Philipp Grubauer.

He made 30 saves, including a critical stop of Kaprizov on a breakaway in the closing seconds of the second period. As Minnesota pushed for an equalizer in the third period, Grubauer held the Wild off with 16 saves in the final 20 minutes.

"They wanted to push back and throw everything on net," Grubauer said.

Joel Ericksson Ek nearly pulled Minnesota even midway through the third on the power play. His tipped shot trickled along the goal line but hit the post and stayed out.

"Everybody’s watching, right? We have to score on those," Ericksson Ek said.

Minnesota played without leading scorer Mats Zuccarello and forward Rem Pitlick after both were placed on the NHL’s COVID-19 protocol earlier Thursday. Zuccarello had seven points through six games, while Pitlick had an assist in his Wild debut in Tuesday’s win at Vancouver.

"I think we started good the first five minutes," Ericksson Ek said. "They got some some power play time, they got into it and we didn’t win enough battles, wall battles to get out of our zone."

Fleury had three goals in 47 games last year between Carolina and Anaheim. His career high of four goals came in the 2019-20 season with the Hurricanes. But Fleury fits the mold of the kind of player Seattle was hoping would flourish with a bigger role.

Fleury’s first goal was a wrist shot from just inside the blue line through traffic that sneaked past Talbott.

His second was a terrific individual play. After a lengthy spell in the offensive zone, Fleury faked a slap shot from distance, carried the puck deep and flicked a wrist shot that Talbot saved. But the puck rebounded right to Fleury and he quickly wrapped around the back of the net, beating Talbot and giving Seattle a 2-1 lead.

"I just faked it, walked around them, thought I had a hole short side and missed it, but I got my rebound and just wrapped it in," Fleury said. "That one felt pretty cool."

Basketball Hall of Famer Lenny Wilkens was honored Thursday with the street outside of Climate Pledge Arena being renamed Lenny Wilkens Way. Wilkens, a coach and player for the Seattle SuperSonics, celebrated his 84th birthday on Thursday and the crowd sang to him during the game.

NOTES: Wild F Connor Dewar and defenseman Jon Lizotte made their NHL debuts. It was especially meaningful for Dewar, who played junior hockey for the nearby Everett Silvertips. D Jordie Benn also made his Minnesota debut. ... Seattle has allowed two goals in 18 power play attempts this season.

Minnesota: At Colorado on Saturday.