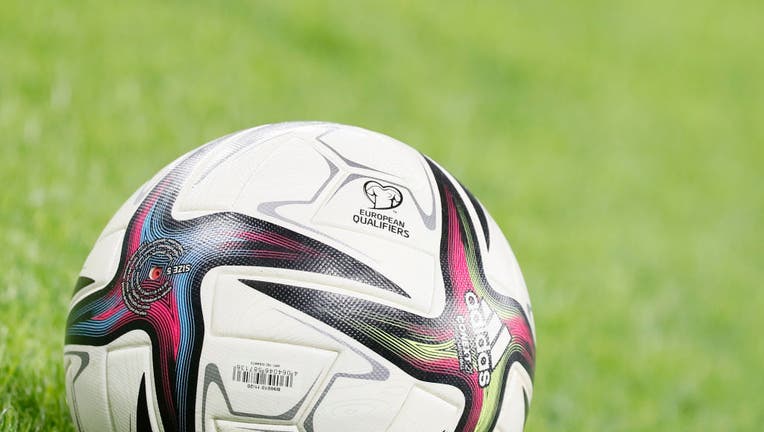 FILE IMAGE - European Qualifiers logo is seen on the official ball during a training session on the eve of the FIFA World Cup Qatar 2022 Group H European qualification football match between Russia and Cyprus on Nov. 10, 2021, at Gazprom Arena in Sai

The tournament runs from Nov. 21 through Dec. 18. FOX Sports will air all 64 matches live across FOX (35) and FS1 (29) with every match livestreaming on the FOX Sports App.

All 64 FIFA World Cup matches will stream live on the FOX Sports App.

The FIFA World Cup is the biggest men's soccer tournament in the world. Here's a look at the eight countries that have won the World Cup since the tournament was first held in 1930.

The United States Men’s National Team is set to appear in its 11th FIFA World Cup. The team will face three opponents out of Group B, with all three matches airing on FOX at 2 p.m. ET.

The USMNT opens play on the first day of the tournament, Monday, Nov. 21, at Ahmad Bin Ali Stadium in Al Rayyan against the winner of the UEFA Playoff scheduled for June between Wales, Scotland and Ukraine.

The USMNT’s highly-anticipated rematch with England will take center stage the day after Thanksgiving on Friday, Nov. 25 from Al Bayt Stadium in Al Khor. The showdown with England marks the third all-time FIFA World Cup meeting between the two sides and the first since 2010 when their group stage match ended in a 1-1 draw.

Live coverage for every USMNT match will begin an hour before kickoff and feature a 30-minute postgame show on FOX.

"It's fitting this tournament will take place during the holiday season because the draw was a gift to soccer fans everywhere, highlighted by the USMNT’s return and an epic rematch with England, alongside so many storied group stage matchups," David Neal, executive producer of FIFA World Cup on FOX and FOX Sports' vice president of production, said in a statement.

"Between global heavyweights playing each other early on and having the opportunity to present what could be the last FIFA World Cup for Lionel Messi and Cristiano Ronaldo, FOX Sports is honored and excited to bring our world-class production to not only showcasing the matches, but also deliver nearly 100 hours of studio shows on linear alone around them," Neal added.

FOX will air the first match between the Netherlands and Senegal on Monday, Nov. 21 at 5 a.m. ET from Al Thumama Stadium. Host country Qatar opens play vs. Ecuador hours later in Al Bayt Stadium at 11 a.m. ET on FOX.

The next day, Tuesday, Nov. 22, at 2 p.m. ET, reigning FIFA World Cup Champion France will play the winner of the Intercontinental Playoff scheduled for June between Australia, Peru and United Arab Emirates. That match will take place at Al Janoub Stadium in Al Wakrah.

Luis Suárez and Uruguay take on Korea Republic on FS1 at 8 a.m. ET from Education City Stadium in Al Rayyan. Cristiano Ronaldo and Portugal open play vs. Ghana on FOX at 11 a.m. ET from Stadium 974 in Doha. Neymar and Brazil play Serbia on FOX at 2 p.m. ET from Lusail Stadium in Doha with coverage leading directly into the NFL ON FOX pregame show at 4 p.m. ET.

The FIFA World Cup Final will air on FOX, Sunday, Dec. 18 at 10 a.m. ET from Lusail Stadium with live coverage beginning at 9 a.m.

Coverage of all the FIFA World Cup action, including the championship, will feature a roster of prominent FOX soccer analysts, hosts, tournament legends and more personalities to be announced in the summer, FOX Sports said.