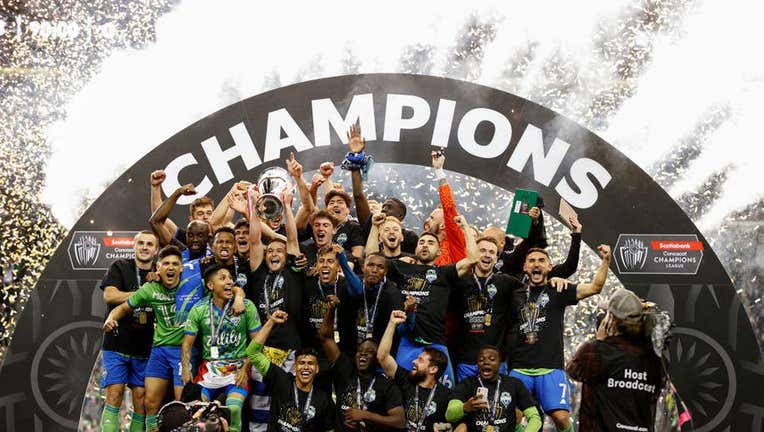 SEATTLE, WASHINGTON - MAY 04: The Seattle Sounders celebrate after beating Pumas 3-0 during 2022 Scotiabank Concacaf Champions League Final Leg 2 at Lumen Field on May 04, 2022 in Seattle, Washington. (Photo by Steph Chambers/Getty Images)

SEATTLE - FIFA will announce the host cities for the 2026 World Cup on Thursday, June 16, and the Seattle Sounders are eagerly anticipating the Emerald City to make the cut. On Wednesday, the Sounders announced a list of local watch parties across the state of Washington, where soccer fans can unite and watch the big announcement.

The 2026 World Cup is set to take place in three countries across North America; the United States, Canada and Mexico. There are currently 23 venues bidding to host World Cup matches in 2026, and Seattle is one of them. The full list can be found below.

The Sounders like Seattle's chances, especially after the Rave Green brought home the CONCACAF Champions' League title in early May - making them the first MLS team to win the international championship in its current format. After witnessing a major soccer fan base, a packed house at Lumen Field and three seismic "Rave Quakes" recorded after each goal scored, the city of Seattle has caught the eye of FIFA.

The Sounders have one question for soccer fans: "Ready to watch history in the making?"

FIFA will be announcing the 2026 World Cup host cities on Thursday.

The 23 venues bidding to host World Cup matches in 2026 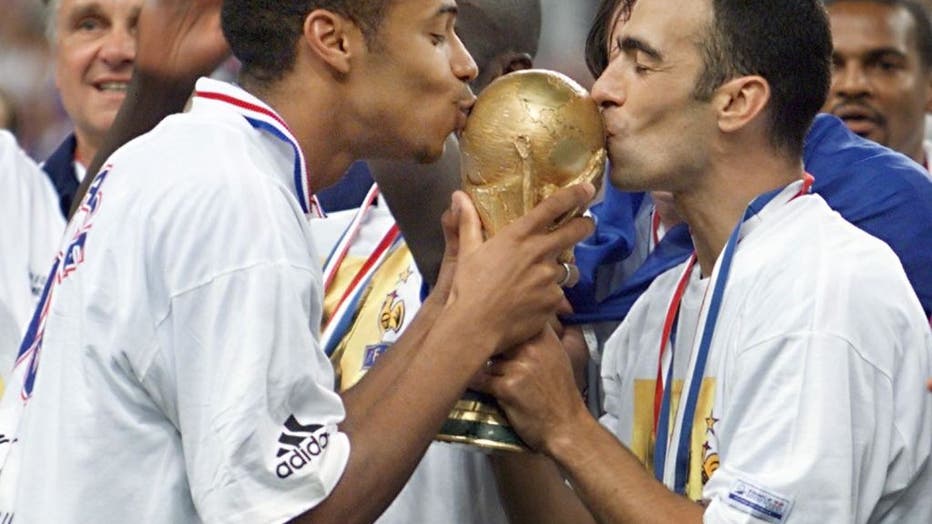 AT&T Stadium, the home of the Dallas Cowboys, is the largest venue in the NFL. The stadium, which opened in 2009, has a retractable roof and an artificial surface. Its capacity is about 93,000, but the stadium set an attendance record of more than 105,000 for an NFL game the year it opened. It also hosted the 2010 NBA All-Star Game. The nearby city of Dallas hosted games at the 1994 World Cup at the Cotton Bowl.

Mercedes-Benz Stadium is one of three NFL-MLS venues. The Atlanta Falcons and Atlanta United both play home matches at the stadium, which opened in 2017 and seats about 75,000. The stadium has a retractable roof and an artificial surface, and it also hosted college basketball’s Final Four in 2020.

M&T Bank Stadium is another NFL stadium, hosting games for the Baltimore Ravens. The stadium opened in 1998, seats about 71,000 and has a grass surface. Baltimore is about 40 miles from Washington, which hosted matches at the 1994 World Cup at RFK Stadium.

One of only three NFL stadiums not named after a sponsor, Paul Brown Stadium is the home of the Cincinnati Bengals. The stadium is named after Bengals founder Paul Brown, who had previously founded the Cleveland Browns. Brown died in 1991. The stadium opened in 2000 and has a seating capacity of about 67,000 with an artificial surface.

From football to soccer to rugby league, Empower Field at Mile High has hosted it all. The venue, which replaced the old Mile high Stadium, opened in 2001 and has a capacity of about 77,000 with a grass surface. It is the home stadium of the Denver Broncos but also has hosted Gold Cup and Nations League matches in the CONCACAF region. In 2018, England beat New Zealand 36-18 in a rugby league match.

Just across the Hudson River from New York, MetLife Stadium opened in 2010 as a replacement for Giants Stadium. Both the New York Jets and New York Giants play NFL games at the venue, which has a seating capacity of about 87,000 and has an artificial surface. The previous stadium hosted several matches at the 1994 World Cup and the 1999 Women’s World Cup.

Commonwealth Stadium opened in 1978, only a few weeks before Edmonton hosted the Commonwealth Games. The stadium has a seating capacity of about 56,000. It is the home stadium of the CFL’s Edmonton Elks. It has an artificial surface. The stadium hosted matches at the 2015 Women’s World Cup and also served as the venue for the 2001 track and field world championships.

The Boston suburb of Foxborough hosted games at the 1994 World Cup, but Gillette Stadium is a different venue, built near the old Foxboro Stadium. The new venue opened in 2002 and has a seating capacity of about 70,000. The stadium, which has an artificial surface, hosts home games in football for the New England Patriots and in soccer for the New England Revolution. The town is about 30 miles south of Boston and 21 miles north of Providence, Rhode Island.

Used mostly for soccer, the Estadio Akron opened in 2010 and hosted the Copa Libertadores finals that year and the opening ceremony of the Pan American Games in 2011. Mexican soccer club Chivas plays its home matches at the venue, which has a capacity of about 48,000 and a grass surface. The city hosted matches at both the 1970 and 1986 World Cups, but at a different stadium.

NRG Stadium hosts football, soccer and even some rodeo. The stadium, which opened in 2002, is the home of the Houston Texans and has staged World Cup qualifying matches for the United States. But it also serves as a home venue for some Mexican national team friendlies. The Houston Livestock Show and Rodeo also is held annually at the stadium, which has a seating capacity of about 72,000 and an artificial surface. Its retractable roof and air conditioning will be important given the area’s summer heat and humidity.

The city of Los Angeles has two candidates for the World Cup and one of them is the newest on the list, SoFi Stadium. Built on the site of the Hollywood Race Track and opened in 2020, the stadium hosts both the Los Angeles Ram and the Los Angeles Chargers of the NFL. It has a seating capacity of about 70,000, an artificial surface and a fixed roof.

Arrowhead Stadium is the home of the Kansas City Chiefs. The stadium opened in 1972 and has been renovated several times, last in 2010. The seating capacity is about 76,000, making it the sixth-largest NFL stadium. The stadium is famous for its noise records, with opposing teams sometimes struggling to communicate because of the racket. It has a grass surface.

Estadio Azteca became the first stadium to host two World Cup finals when Argentina beat West Germany 3-2 in the 1986 title match. It previously hosted the final for the 1970 tournament, when Brazil defeated Italy 4-1 — with Pelé scoring the first goal. Perhaps even more famous was the 1986 quarterfinal match at the stadium between Argentina and England, when Diego Maradona scored a goal by punching the ball into the net. The stadium opened in 1966 and has a capacity of about 87,000 with a grass surface. The venue’s record attendance for soccer, however, is said to be 119,853.

Located in suburban Miami, Hard Rock Stadium hosts both NFL and college football games. The Miami Dolphins and the University of Miami both play at the venue, which has a seating capacity of about 67,000, a grass surface and a roof that covers spectators but is open over the field. The stadium opened in 1987 and also hosts tennis tournaments.

One of the newer stadiums in contention, Estadio BBVA opened in 2015 and has a grass surface. Mexican club Monterrey plays it home matches at the stadium. Seating capacity is about 53,000. Three matches at the 1986 World Cup were held in Monterrey, but at Estadio Tecnológico.

Nissan Stadium has some experience with soccer. The stadium hosted group matches during the 2017 CONCACAF Gold Cup and has also been the venue for World Cup qualifiers. The stadium opened in 1999 and has a capacity of about 70,000. It has a grass surface and also serves as the home of the NFL’s Tennessee Titans, who have started planning for a new stadium.

The proposed venue in Orlando has World Cup experience. Then known as the Citrus Bowl, the 65,000-seat stadium hosted matches at the 1994 World Cup. Olympic soccer matches were also played at the stadium two years later, when nearby Atlanta hosted the 1996 Games. The stadium opened in 1936 and has been expanded several times. It has an artificial surface.

The second candidate in Los Angeles is among the most famous stadiums in the world. The Rose Bowl hosted the 1994 World Cup final when Brazil beat Italy on penalties. Perhaps even more famous was the final of the 1999 Women’s World Cup, when Brandi Chastain scored the winning penalty kick for the United States against China and then took off her shirt in celebration. The stadium, which has a capacity of about 88,000 and a grass surface, has hosted many other events since opening in 1922, including cycling at the 1932 Olympics.

Lincoln Financial Field opened in 2003, and its first event was a soccer match between Manchester United and Barcelona. The stadium serves as the home venue for the Philadelphia Eagles and Temple University. The 2015 CONCACAF Gold Cup final was played at the stadium, with Mexico beating Jamaica 3-1. The stadium seats nearly 70,000 spectators and has an artificial surface.

Located about 40 miles south of San Francisco, Levi’s Stadium opened in 2014 and has hosted several major football games since, including the Super Bowl in 2016. It serves as the home stadium of the San Francisco 49ers. The stadium has a capacity of about 71,000 and a grass surface.

Lumen Field is the home stadium of two professional soccer teams and the Seattle Seahawks of the NFL. The stadium, which opened in 2002 and has a capacity of about 69,000, hosts the Seattle Sounders of MLS and the OL Reign of the National Women’s Soccer League. The Pacific Northwest Seismic Network records shaking in the stadium caused by the crowd. The stadium has an artificial surface.

BMO Field is the home of the Toronto Argonauts of the CFL and Toronto FC of MLS. Originally constructed as a soccer venue, it has hosted several international events since opening in 2007, including under-20 World Cup games for both men and women and rugby matches. In 2010, it became the first venue outside the United States to host the MLS Cup. The stadium also hosted matches for the 2015 CONCACAF Gold Cup. It has a capacity of about 28,000 and a hybrid surface, and the bid envisions an expansion to about 45,000.

Opened in 1983, BC Place has served as the home of the BC Lions of the CFL since its inauguration. The stadium also hosts home games for the Vancouver Whitecaps of the MLS. The stadium has a capacity of about 54,000 and was last renovated in 2011. It has an artificial surface.

FIFA will announce the host cities for the 2026 World Cup and Alexi Lalas talks about Seattle's chances to host.

The live televised announcement will air at 2:00 p.m. (Pacific Time) on FS1, and will be streamed live on fifa.com.

According to the Seattle Sounders, Seattle's Bid, built on a commitment to Soccer, Innovation, and Everyone, champions a World Cup vision that's inclusive, sustainable, and celebrates Seattle's rich soccer history.