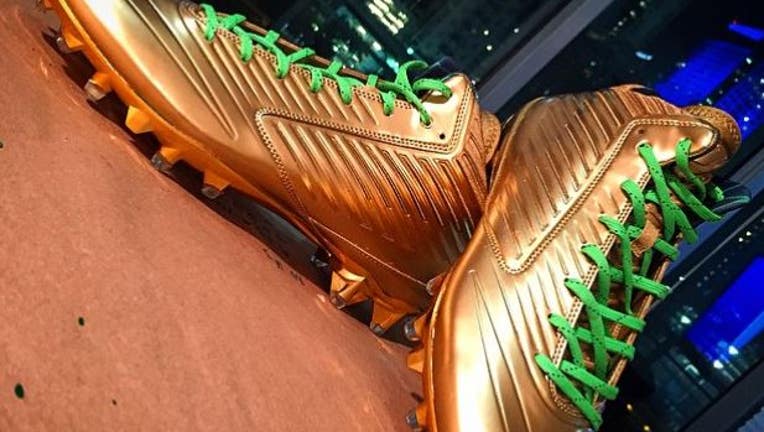 A photo of the shoes made for Marshawn Lynch was posted on designer Marcus Rivero's Instagram account.

SEATTLE -- Seahawks fans are once again rallying behind Marshawn Lynch after the NFL reportedly told him he would not be allowed to play if he wore gold-pleated cleats during Sunday's NFC Championship game against the Green Bay Packers.

Earlier, The Los Angeles Times reported that designer Marcus Rivero said Lynch will be wearing the gold-painted cleats he made for him.

“I cannot wait to see @beastmode Marshawn Lynch rocking these this weekend,” Rivero said in his Instagram post. “I think one of his notorious crazy runs would just look that much ‘Gold-er’.”

A fan from Spokane started an online petition asking the NFL to allow Lynch to wear the golden shoes.

"The NFL is picking on Lynch and not letting him express himself. Let Lynch wear his gold shoes in the Super Bowl!" Stars wrote in the Change.org petition.

The footwear has real gold flakes and is valued at more than $1,000, according to TMZ, which first reported on the shoes.