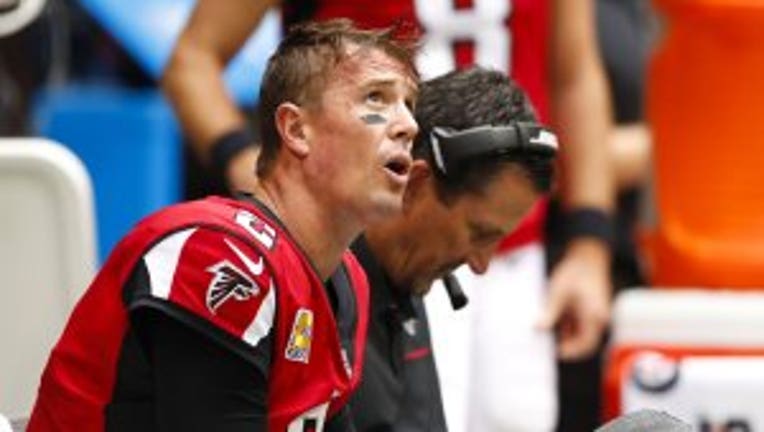 ATLANTA, GA - OCTOBER 20: Matt Ryan #2 of the Atlanta Falcons reacts on the bench next to QB's coach Greg Knapp in the second half of an NFL game against the Los Angeles Rams at Mercedes-Benz Stadium on October 20, 2019 in Atlanta, Georgia. (Photo by

Coach Dan Quinn said Ryan ran in a pool on Monday to test the ankle and has not been ruled out for Sunday's game against Seattle.

The 34-year-old Ryan has not missed a start since 2009. His streak covers 154 regular-season games.

Asked if the injury is a high ankle sprain, Quinn said: "We'll stay with sprain. ... Hopefully it's not a long-term thing."

Quinn said Ryan won't practice Wednesday but could return later in the week. He said Ryan will "try anything he can" to play.

Quinn said the Falcons will prepare to have Ryan and also be ready to have veteran backup Matt Schaub as the starter.

Ryan was hurt when sacked by Aaron Donald in a 37-10 loss to the Los Angeles Rams.

The Falcons have a bye week after playing Seattle, possibly increasing the chances Ryan would be held out this week if there is any uncertainty about his status. That would give him two weeks to recover.

"If he's ready to (play), then he would," Quinn said. "We wouldn't put him out there if he couldn't do all the things that he needs to do. If he was out there where he was playing on one foot, then that wouldn't be the way to go."

"I think we'd be very premature today to write him off for this week," Koetter said.

Ryan held the NFL lead with 15 touchdown passes entering last weekend's games. He threw for more than 300 yards in each of the team's first six games.