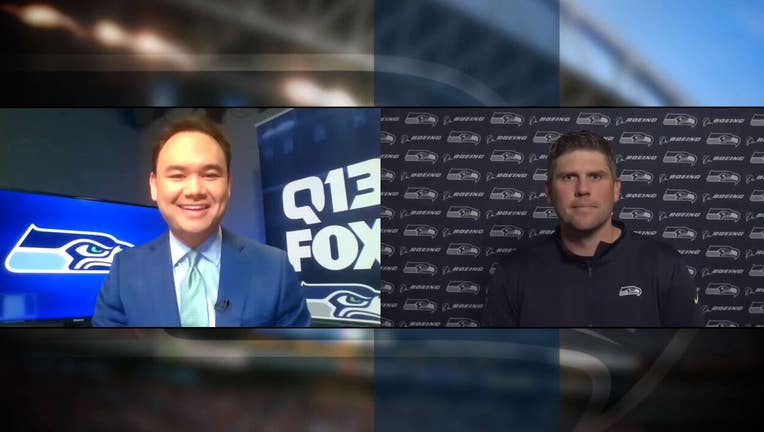 Sports Director Aaron Levine sat down with new offensive coordinator, Shane Waldron, to talk about what he’s looking forward to this season.

Levine: What excites you the most being here in Seattle with all those weapons?

Waldron: Oh man that's a tough thing to pick just one thing, but I just think the competitive atmosphere that’s around this building, that positive energy every single day.

Levine: So with so many different weapons how do you keep everybody happy?

Waldron: (laughs) Well you know I think when we have this balanced approach there, I think guys will see, you know the ball is able to be distributed around to all the different guys, and you know one play, someone might be asking to really work hard for a buddy.

I think the more that the guys care about each other, know each other, respect each other as people and as teammates. It is a professional football business that we’re in, but it's driven by relationship.

It just depends on who’s open on each particular player, or what the flow of the game is going. And when they have that respect for each other, I think that comradery will last throughout the course of the season where you know one game one guy might have the hot hand the other game, might be someone else, and just keeping that balance and that mix, and keeping everyone in that positive mindset.

Levine: Speaking of exciting, when you saw DK Metcalf compete in the 100 meters at the track event back in May, what was your reaction?

That was unbelievable, I mean that was something else. He’s such a big dude and he’s shooting out of those blocks and he’s looking like an Olympic caliber runner. Put himself out there, put himself in that type of a competitive situation against world-class athletes. It's something thats not his specialty and then to run in the 10 threes at his size and knowing that that’s something he kind of went out and just did. It just shows a lot about his competitive nature and, you know his focus and drive to excel at everything.

Levine: He that speed is gonna translate to the football field this season. I think we're all hoping for that.

Waldron: Oh hey you and me both.

Levine: Give me your first impressions of working with Pete Carroll.

The great thing, my first impression with him, which was on a zoom interview, hasn't changed from the time that I've been around him in person. He's the same guy everything day with that positive energy that I referenced before and it's really his positive energy that trickles down throughout this entire building.

Waldron: It’s just been fun to be around, you know just being able to bounce ideas off of him, you know with his defensive past. He’s got a great grasp obviously on offensive football as well, so just that initial positive attitude allows you to just really have that open line of communication with him every single day

Levine: I hear the music blast throughout the building. Does he have a decent music choice?

Waldron: Yeah hey, there’s a little bit of everything and anything gets played. You know it might be a team meeting, might be just walking through the halls at 5 o’clock and you hear the music pumping out of that corner office there.