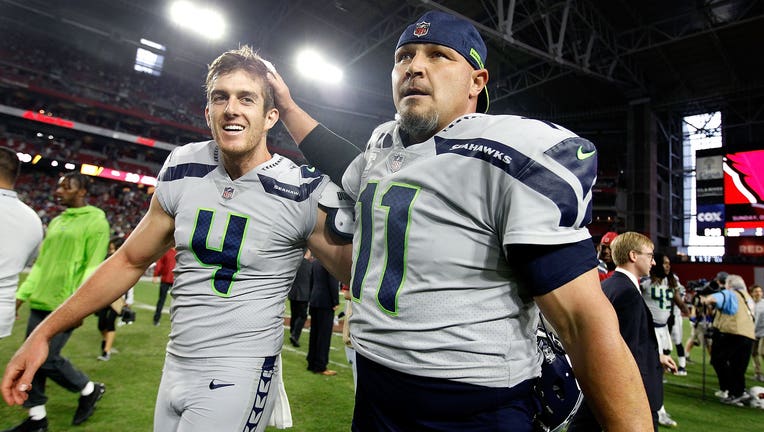 Kicker Sebastian Janikowski #11 and holder Michael Dickson #4 of the Seattle Seahawks walk off the field after kicking the game winning field goal against the Arizona Cardinals during an NFL game at State Farm Stadium on September 30, 2018 in Glendal

SEATTLE - Seahawks Training Camp has begun and Q13 FOX is your exclusive home for all things Seahawks, including interviews you won't see anywhere else!

Read the transcription below:

Charlston: Micheal, what does it mean to be able to stay in Seattle, after signing that extension? You’re here through 2025.

Dickson: It means everything. It’s such a relief to know that I’ll be able to put this jersey on again, and have more years out here, and play in Lumen filed with all the fans again. I miss it so much, so I’m just happy to know that I’ve got some more years of that ahead of me.

Charlston: What is the craziest thing you've heard a punter analyze? Like if they're talking like atmospheric pressure or obviously wind is a factor, but is there anything where you’re like "is that really gonna make much of a difference?"

Dickson: I’ve heard about a kicker, who was talking about the spin of the earth.

Dickson: Yeah Neil DeGrasse Tyson talked about like the rotation of the earth. I didn't hear him say this but I’ve heard through other people that he was thinking he needs to aim differently now because the earth is spinning. That’s probably the craziest thing (laughs)

You obviously need a lot of space for what you do. For training. Home wise, do you have something you have set up? I remember Jeff Feagles like, at his kids' baseball practices, he would go use football fields nearby, like using the space that he had. So what do you use?"

Dickson: I go back to Texas and get access to the facilities there. But last year during COVID,  I was getting kicked off fields left right and center. Every school in the area I was driving round to different fields. Um, I was lucky if I didn't get kicked off.

Charlston: You talked about in your latest press conferences, how you really made an adjustment from your second season to last season, where you were breaking records. Get back on it again, can you talk about the difference there?

Dickson: A lot of the time, I’ll leave practice and I’ll be like ‘man that wasn't a good day. I need to work on this and then I kind of leave that night — I don't look at the film. And then the next morning I take all the emotion out of it and go over the film. And break it down, break down all my averages. Get off time, direction, distance, hang-time, everything, and just look it numbers-wise and I’ll be like ‘wow, I actually punted pretty good that day, I don’t really need to change anything.’ And then like you said, I’ve been meditating pretty much every day, and journaling. Meditating I kind of just try and clear my mind and just focus on my breathwork. And yeah visualization stuff I do that as well.