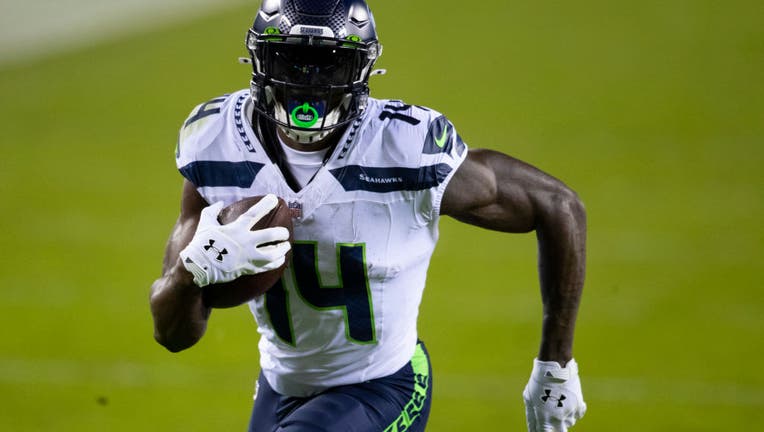 Sports Director Aaron Levine sat down with wide receiver D.K. Metcalf to talk about what is ahead for him this season.

Read the interview below:

Levine: Last year I asked you if you had any concerns coming into Training Camp, and you said 'I’m concerned for whoever has to cover me.’ This year I’ll ask, do you have any advice to players who have to cover you?

Levine I mean you set a single season franchise record in receiving yards last season, where can you improve this year?

Metcalf: Try to take Tyler’s record now. I know he’s still building and seeing how good he can be and I’m right along with him.

Levine: Is he on notice?

Metcalf: Oh for sure (laughs) Tyler knows my goals. He actually came to my house a couple of weeks ago and asked me where my goal board was ‘cause he saw it last year and he asked me again this year, but I haven't had time to sit down and think about it yet.

Levine: I was gonna say, you wouldn't tell us your specific goals before last season, can you at least share them now and if you've met those goals?

Levine: (laughs) Even after the fact?

Metcalf: Yes sir, I mean I tell a couple of people in-house, and you know they hold me accountable.

Levine: What excites you the most about this new offense under Shane Waldron?

Metcalf: How many defenses are gonna try to stop us next year because you know, it’s an offense that they haven't seen us run yet so...It’s gonna be very exciting.

Levine: So how different in general is this offense gonna look?

Metcalf: You’ll see it the first couple of weeks, you know when we line up, I just know. Shane brings a different approach, you know, than the last couple years that we've been here with his offensive philosophy, so just to put that on display the first couple weeks of the season will be amazing

Levine: We hear it every year, every game is a championship game, no game is bigger than any other, but personally, at least, are the Rams starting to become your biggest rival?

Levine: You mentioned Jalen Ramsay. The last couple of years, what have you learned from facing him, including three times last season?

Metcalf: He’s an awesome competitor, you know, he exploited some weaknesses that I had. And just talking to him and going up against him, I’m pretty sure I've got those weaknesses taken care of.

Levine: Do you ever imagine what it would have been like to start your career somewhere else? Because there were a lot of teams that had a lot of chances to take you in the draft a couple years ago before the Seahawks.

Metcalf: No sir, I don't even want to think about it because I know I wound up in you know, the perfect situation, the perfection franchise in the Seattle Seahawks, and I just thank them for drafting me and know it’s gonna be a long road ahead.