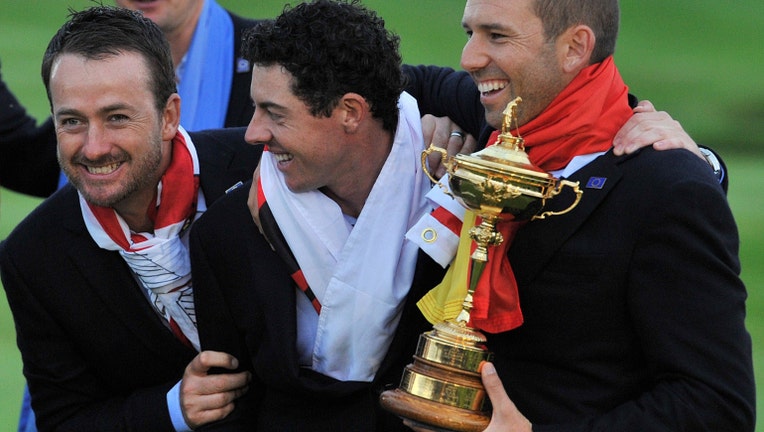 GLENEAGLES, Scotland. (CNN) -- In the end, there would be no gazumping at Gleneagles.

Try as it might, Team USA couldn't pull off its own miracle, having suffered the ultimate Ryder Cup indignity two years ago at Medinah in Chicago when leading 10-6 going into Sunday.

Led by its talisman Rory McIlroy --- the world number one --- Europe saw off a brave challenge from those in red to retain the trophy by a scoreline of 16½-11½.

It was the continent's third straight victory, it's eighth in the last 10 and one that will provoke searching questions for United States captain Tom Watson.

His European counterpart Paul McGinley will be subject to no such inquisition, universally lauded by his players and serenaded by a vibrant Scottish crowd once his triumph was rubber-stamped.

Rookie Jamie Donaldson secured the clinching point by beating Keegan Bradley, and was promptly enveloped on the 15th green by cameramen, photographers and a jubilant European team.

Before him Graeme McDowell had overturned a three-hole deficit to topple rookie Jordan Spieth while McIlroy's takedown of Rickie Fowler had a brutal edge to it.

"The European team played better than we did," captain Watson said. "It would have been a tough go to beat them this week but it just didn't work out."

In truth, the Ryder Cup had lurched decisively away from the United States on Saturday afternoon, thanks to a dominant European performance in the foursomes.

And while both camps paid lip service to the miracle possibility before taking to the fairways on Sunday, there would be no second successive seismic turnaround.

The jubilant air around a packed first tee confirmed that few in blue considered an upset feasible, McDowell roared off by a crowd that had been entertaining themselves in song a good hour before the action began.

For several hours it was the epicenter of world sport, 18-time major champion Jack Nicklaus and former Manchester United manager Alex Ferguson --- the most successful manager in the history of English soccer --- both present.

And though the task was tall, the United States requiring eight-and-a-half points to pull off a memorable victory, a few hours into the contest it led in five matches.

Behind him, the other standout U.S. rookie Patrick Reed also stepped into an early lead over Sweden's Henrik Stenson.

Hunter Mahan, who succumbed in the crucial match at the climax of the 2010 Ryder Cup, birdied four of the opening six holes to seize the initiative in his clash with Justin Rose, from England.

But as he had promised prior to the competition, four-time major champion McIlroy proved he was at the heart of Europe's engine-room.

Five birdies in six holes took him five clear of Fowler, and in effect, sealed the outcome of their tussle before they had even reached the ninth hole.

But for an hour or so, that lone sliver of blue on the leaderboard was fully surrounded by red.

Slowly, the tide began to turn.

Sergio Garcia and Ian Poulter forged ahead in the early stages of their matches, while Stenson was chewing away at the lead of Reed.

But the top match was symptomatic of U.S. fortunes, as McDowell recovered from his stuttering start and steadily set about hauling in Spieth.

Trailing by three going down the tenth, the man who had been serenaded by European fans with with a chorus of "You've got Big Mac, we've got G-Mac," before teeing off, found his stride.

An inspired stretch of four birdies, acquired through a combination of formidable iron play and accurate putting, meant a symbolic switch from red to blue at the top of the leaderboard.

It galvanized those behind him. Rose now roared back with four straight birdies of his own and ended with half a point against Mahan, for whom redemption proved out of reach still.

Roars populated the course as the majority of the 40,000-strong crowd grew in energy and belief, fans glued to the big screens when there was no action to be seen in front of them.

McDowell ended Spieth's challenge on the 17th, and though Reed won the last to see off Stenson, Kaymer's chip-in in front of huge crowds on 16 sealed another point.

Phil Mickelson carved out a win over home favorite Stephen Gallacher, while Matt Kuchar holed out from 160 yards on his way to a comprehensive win over Denmark's Thomas Bjorn.

But further down the leaderboard, Donaldson had assumed complete control of his battle with Keegan Bradley, the 2011 U.S. PGA Champion.

As it became clear the Welshman was most likely to be the one to retain the trophy, crowds scampered up to the 14th green and jostled for position as Donaldson stood over his ball.

Though that one didn't drop, glory wasn't far away. A pitch perfect iron shot on the next hole landed barely two feet from the cup and once Bradley got down to the green he conceded.

McGinley, and Europe, could rest easy.