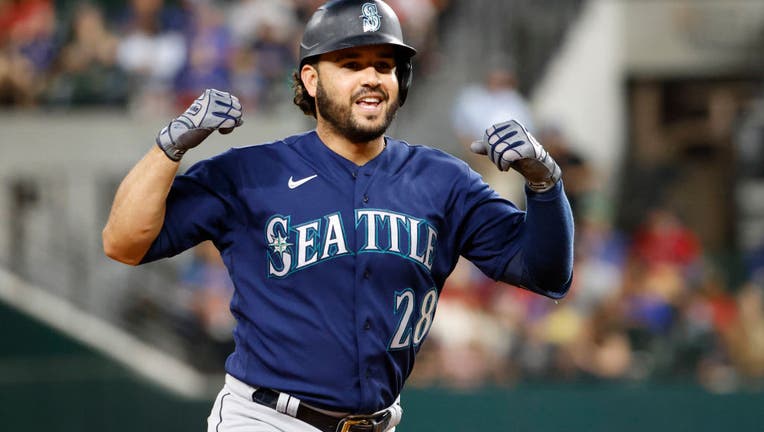 ARLINGTON, TX - JUNE 3: Eugenio Suarez #28 of the Seattle Mariners celebrates after hitting a two-run home run against the Texas Rangers during the ninth inning at Globe Life Field on June 3, 2022 in Arlington, Texas. (Photo by Ron Jenkins/Getty Imag

ARLINGTON, Texas - Eugenio Suárez wasn’t thinking about his error that contributed to Seattle’s blown lead when he stepped to the plate in the ninth inning.

The miscue came to mind after he put the Mariners back in front.

Suárez hit a two-run homer with one out off closer Joe Barlow, and the Mariners rallied past the Texas Rangers 4-3 on Friday night.

A bad throw by Suárez at third base sparked a two-run sixth that got the Rangers even at 2.

"After that error, I didn’t think about, this game is like that and I threw it away," Suárez said. "But I know late in the game maybe I get an opportunity to do something,"

After Nathaniel Lowe had given Texas a 3-2 lead with a leadoff homer in the seventh, Suárez got his chance. His 10th home run was an opposite-field shot to right after J.P. Crawford walked.

Barlow’s first blown save in 18 chances going back to last season gave the Mariners a 5-2 record since dropping a season-worst nine games under .500 at the end of a 7-21 stretch.

"Obviously, he’s not going to be perfect all year," Texas manager Chris Woodward said. "I think the walk is probably the thing he’ll talk about. I can’t say anything bad about Joe. He just made a mistake and the guy hit it."

Penn Murfee (1-0) struck out two in a scoreless eighth for his first major league win, and Paul Sewald worked around a two-out walk in the ninth for his third save.

Texas has lost three straight since reaching .500 for first time since May 2021.

Dane Dunning’s winless streak reached six games despite a solid start. The Texas right-hander allowed three hits and two runs in seven innings while striking out seven to push his team-leading total to 63.

Corey Seager, who had two hits, and Kole Calhoun lined RBI doubles to get the Rangers even in the sixth, which started with Suárez’s throw sailing over first baseman Ty France’s head on a routine grounder from Marcus Semien.

Seager’s hit down the line in right ended Logan Gilbert’s scoreless streak against Texas this season at 11 2/3 innings. Calhoun’s tying liner to the base of the wall in left stopped his 0-for-13 skid.

A night after his career-best 13-game hitting streak ended, France was hit by a pitch from Dunning leading off the fourth and scored on Suárez’s sacrifice fly following Crawford’s double.

Cal Raleigh’s fourth homer in 12 games and fifth overall put the Mariners up 2-0 in the fifth.

Gilbert allowed five hits and two runs, one earned, with a walk and seven strikeouts in six innings. The lanky right-hander finished with a strikeout of Jonah Heim with Calhoun trying to distract him on third base.

Calhoun, the potential tying run, was more than halfway down the line toward home. Because of the shift, there was nobody near the bag to try to force him back.

"I would have freaked out, quite frankly," Mariners manager Scott Servais said. "The guy’s standing 30 feet from home plate and he doesn’t waffle. Says a lot about how he’s wired."

Most of the Rangers wore maroon shirts with "Robb Elementary School" in white letters on the front during batting practice as a tribute to victims in the shooting in Uvalde, about 350 miles south of Globe Life Field. Others wore orange shirts with a Rangers logo.

Many of the Mariners, including Servais, wore orange shirts with #wearorange and a Mariners logo. The orange on both sides was in recognition of national gun violence awareness day Friday. It has been recognized since 2013. The orange represents the color many hunters wear to protect themselves and others.

The Rangers recalled LHP Kolby Allard from Triple-A Round Rock and optioned OF Zach Reks there. ... Gilbert’s career-best streak of starts lasting at least seven innings ended at three. ... Texas rookie 3B Josh Smith, who reached base in 10 of his first 15 plate appearances, was replaced after eight innings because of left shoulder soreness.

Rangers: RHP Jonathan Hernández was sent to Round Rock to begin a rehab assignment. The reliever missed last season after having Tommy John surgery in April 2021. Hernández and José Leclerc have been on similar timelines for recovery after having elbow surgery about the same time. Leclerc has already started his rehab stint.