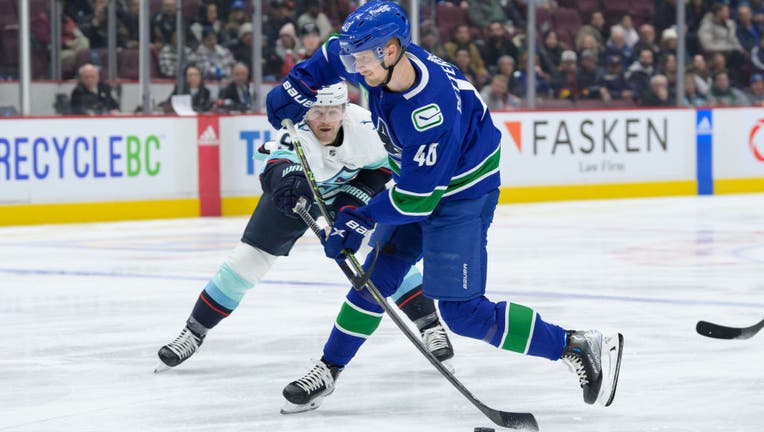 VANCOUVER, British Columbia - Elias Pettersson scored his second goal of the game to tie it with 1:20 left in regulation and added the shootout winner in the Vancouver Canucks’ 6-5 victory over the Seattle Kraken on Thursday night.

Pettersson, who also had three assists, drilled a hard shot from above the faceoff circle to tie it with goalie Spencer Martin off for an extra attacker.

Pettersson returned to the lineup after missing two games because of a non-COVID-19 illness.

"I was running on no energy, just wanting the puck to go in," Pettersson said.

"That’s six days off the ice and then he came in and did what he did tonight," Boudreau said. "Pretty amazing. I don’t think you guys realize how much of an anomaly that is, being off six days and then playing that great. It defies logic."

The Canucks had a power play with a minute left in the 3-on-3 overtime after Seattle’s Jordan Eberle was called for holding, but couldn’t score.

Andrei Kuzmenko had a goal and two assists for Vancouver, Lane Pederson scored his first goal in his third NHL game and added an assist, and Brock Boeser also connected. The Canucks have beaten the Kraken all six times they’ve met.

Daniel Sprong scored twice for Seattle, and Jared McCann, Oliver Bjorkstrand and Alex Wennberg also had goals. Bjorkstrand and Sprong struck 10 seconds apart in the second to give Seattle a 3-1 lead.

"The result is disappointing," Wennberg said. "We just worked really hard. "I feel like we emptied the tank today and unfortunately it didn’t work out."

"We don’t do anything the easy way," Boudreau said. "Give the team credit for not quitting. That’s a testament to the boys in the room."

Sprong scored his second of the night just over a minute later, tipping in a pass from Brandon Tanev. Boeser got Vancouver back within one, redirecting Pettersson shot past goalie Martin Jones on a power play at 8:52.

"We’re here to win a hockey game and we didn’t do that," Seattle coach Dave Hakstol said. "We have to do better when we’ve got a two-goal lead. That’s a game we feel like we should be able to close out."

Canucks: At Edmonton on Friday night.