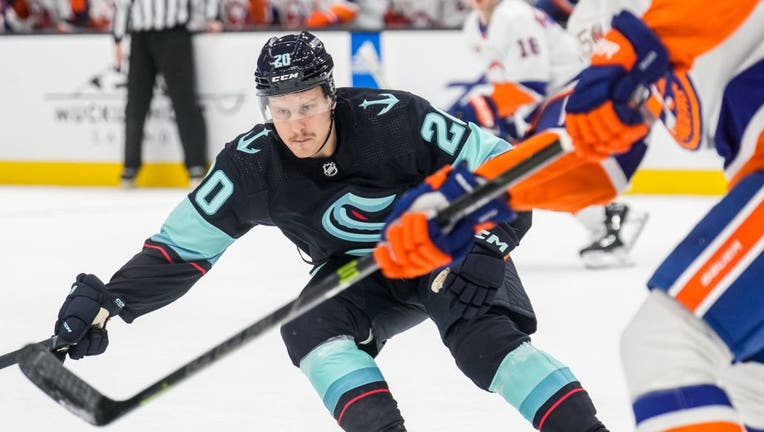 SEATTLE, WASHINGTON - JANUARY 1: Eeli Tolvanen #20 of the Seattle Kraken closes down on defense during the first period of a game against the New York Islanders at Climate Pledge Arena on January 1, 2023 in Seattle, Washington. (Photo by Christopher

SEATTLE - Eeli Tolvanen scored his first goal in a Seattle uniform since coming over from Nashville, and the Kraken halted a three-game winless streak on Sunday night by beating the New York Islanders 4-1.

Mathew Barzal scored for New York, the 100th goal of his NHL career in his 400th game. Ilya Sorokin saved 31 shots for the Islanders.

Tolvanen, who was claimed by Seattle off waivers from the Predators on Dec. 12, snapped a 1-1 tie at the 3:58 mark of the second period. At the top of the right circle, he took a pass from Vince Dunn and drilled a slapshot to the back left corner past Sorokin.

The goal, Tolvanen’s third of the season, came on a power play. That ended a seven-game 0-for-16 Kraken drought with the man advantage dating back to Dec. 11 in a 5-2 victory at Florida.

"That felt really good. It’s been a while since I played my last game, so it’s nice to get the first goal out of the way in the first one," said Tolvanen, whose most recent contest was Nov. 19 against Tampa Bay. "It was a power play, so it’s just getting pucks on the net and shooting right away when you get it in the zone. They told me right before to shoot it as soon as I got it."

Added Kraken coach Dave Hakstol, "The power play goal, you can’t teach that – that’s an ability that he has. He got all of that, and he beat a good goaltender on that play, and that’s a real skill that he possesses. I know he can do that."

Larsson gave Seattle a 1-0 lead at 9:53 of the first period with his fourth of the season, shoveling it in from the top of the crease after taking a pass from Ryan Donato.

Barzal tied it 1-1 at 17:30 of the first, reaching out in front of the left post to direct a pass from Casey Cizikas into the far side of the net, his ninth of the year.

Bjorkstrand tallied his fifth of the season for a 3-1 Seattle lead at 13:04 of the second, slapping in the rebound of a shot by Jamie Oleksiak. Tanev added an empty netter with 34.3 seconds left. It was his seventh goal.

Islanders coach Lane Lambert said getting just 19 shots was a simple matter of not executing.

"You can’t play the speed you want if you don’t execute cleanly," Lambert said. "Give them credit – they filled good gaps all night, but we certainly didn’t execute the way we wanted to. When we did have the puck in the neutral zone, we turned it over instead of getting it in deep and establishing our forecheck."

NOTES: Donato’s assist on Larsson’s first-period goal for Seattle gave him a point in seven of his last eight games. He also has a point in five straight home games, the longest such streak of his career. … Barzal reached his double milestone of 400 NHL games and 100 goals in the same city where he played four seasons of junior hockey (2013-17) with the Seattle Thunderbirds. … New York is now 5-1-0 against Pacific Division opponents. Sunday’s game in Seattle was the first of four straight on the road against Pacific teams, to be followed by stops this week in Vancouver (Tuesday), Edmonton (Thursday) and Calgary (Friday). … The Kraken play their next seven on the road.