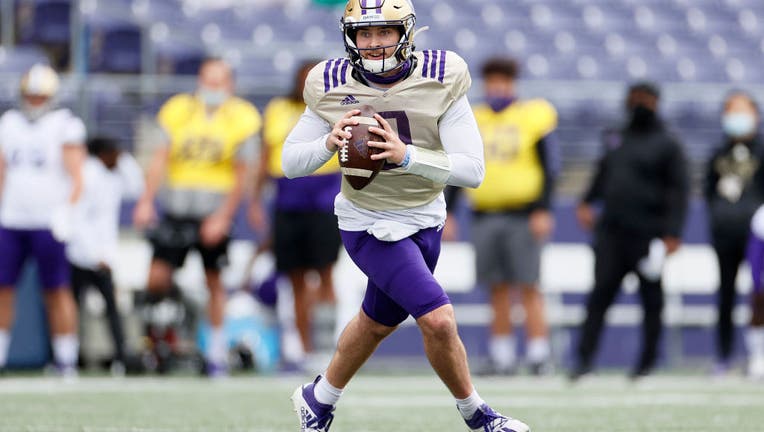 SEATTLE, WASHINGTON - MAY 01: Quarterback Dylan Morris #9 of the Washington Huskies looks to pass during the first half spring game at Husky Stadium on May 01, 2021 in Seattle, Washington. (Photo by Steph Chambers/Getty Images)

SEATTLE - Washington coach Jimmy Lake could have left it an open competition, waited to see how the preseason camp played out and how quarterback Dylan Morris would respond.

That would have been pointless in Lake’s opinion. Even with a talented graduate transfer and a highly touted recruit with bloodlines tying him to the program as options, Morris long ago cemented his spot as the starting quarterback for No. 20 Washington.

"The guys gravitate toward him because they know how much work he puts into it," Lake said. "They know that it means a lot to him. They see the preparation that he goes through."

Morris will begin his second season as Washington’s starter Saturday when the Huskies host FCS powerhouse Montana. In many ways, it’s a dress rehearsal for Washington prior to next week’s showdown at Michigan.

For Morris, it’ll be his first chance to play a home game in front of fans and another chance to validate Lake’s belief in the QB.

Lake put to rest any question of a quarterback competition when he named Morris the starter on the first day of preseason camp.

Maybe the vote of confidence from the head coach wasn’t needed, but it clearly simplified things for the Huskies. There wouldn’t be any looking around wondering if Colorado State transfer Patrick O’Brien or freshman Sam Huard -- son of former Washington QB Damon Huard -- would end up being the starter.

"Even if he named me that early there was still a lot of camp left at that point," Morris said. "And I couldn’t have done anything different. I just got to go and show up every day and do my job."

A year ago, Morris was highly respected but unproven when he took on the starting role for the Huskies. He won the job in part because of the way he handled the virtual setting the Huskies were forced into due to the COVID-19 pandemic while learning a new offensive system.

All the while, Morris was trying to assert himself as a leader and prove he should be the starter for the Huskies through Zoom meetings.

"Last year was weird. I think it’s definitely hard to kind of step into a leadership role when you’re on Zoom," Morris said. "You’re not really in person running plays together. You’re learning it online. Then we got together and finally started running some stuff and just me personally, as a younger guy, I just want to lead by example. Just show the guys I’m gonna do my job and that’s all I can control."

When Washington’s season finally started in November, Morris got just four games of experience, making it hard to fully assess his performance. His debut against Oregon State was the first time he’d taken a collegiate snap. He made some mistakes due to inexperience and at times wasn’t helped by his wide receivers.

But even with just four games and a season cut short by a COVID-19 outbreak, there was a night for which Morris will be remembered.

"I think that’ll be at the top of guys’ lists of experiences here," Morris said.

Down 21-0 to Utah at halftime, Morris led a Washington rally for a 24-21 victory. The winning score came with 36 seconds left when Morris scrambled to his left, threw across his body and found tight end Cade Otton for a touchdown to cap an 88-yard drive.

"Just as a whole offense and as a team, especially, just coming back from that and getting that done, I mean that was big time," Morris said.

Lake has been impressed by Morris’ development through the offseason and command of the offense in the second season under offensive coordinator John Donovan.

Morris has been deemed more of a game manager at the position, but it’s a label he doesn’t mind.

"I’m not gonna go all reckless cowboy out there and just throw the ball around," Morris said. "I just want to protect the football, put us in good situations in the run game, in the pass game and just end with points on the board."