The Seattle Seahawks and Seattle Kraken both announced Tuesday that fans will need to be fully vaccinated to attend games. Seahawks fans can also present a negative COVID-19 test taken within 72 hours of kickoff.

RENTON, Wash. - After more than a month as a spectator, left tackle Duane Brown was on the field as a participant as game week finally arrived for the Seattle Seahawks on Monday.

Brown may not have received exactly what he wanted during his month of watching practice. But the Seahawks appear to have the blindside protector of Russell Wilson satisfied enough for the start of the regular season.

"He’s ready to go and we’re pleased to have him," Seattle coach Pete Carroll said. "In the camp that he was able to put forth he did all the learning. He’s really healthy. He’s really healthy right now and I’m really thrilled about that for him. It was one of the things realized about the process of it that we would not wear him down at all during camp, like any player. So he’s got fresh legs to come in." 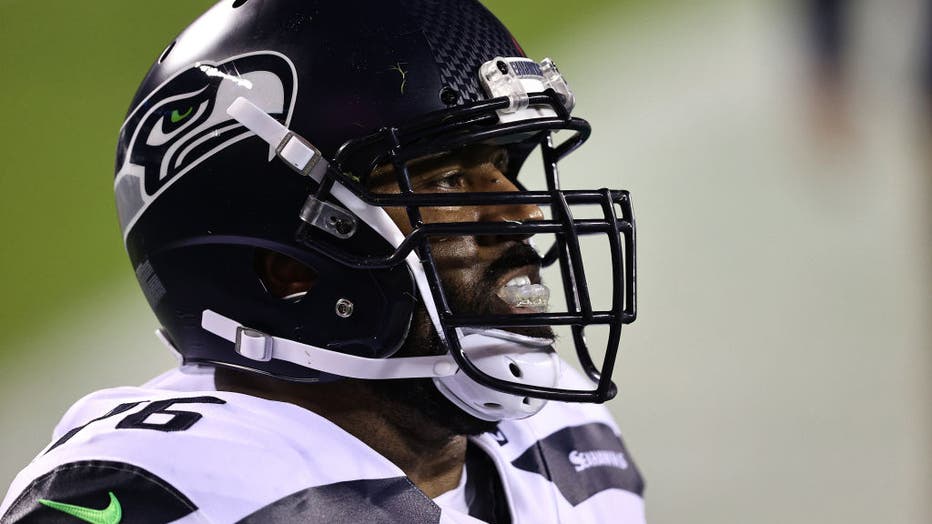 PHILADELPHIA, PENNSYLVANIA - NOVEMBER 30: Duane Brown #76 of the Seattle Seahawks looks on during warm ups against the Philadelphia Eagles at Lincoln Financial Field on November 30, 2020 in Philadelphia, Pennsylvania. (Photo by Elsa/Getty Images)

Brown "held-in" throughout training camp, opting not to participate in practice while seeking more security. Brown’s current contract expires at the end of the season. Seattle has chosen not to engage on anything beyond this season with the 36-year-old veteran, although reports surfaced Monday that there could be adjustments made to Brown’s deal for this season.

Brown took part in walk-throughs and meetings during training camp, but until Monday had not stepped foot on the field as a participant in practice.

Asked if there had been adjustments to Brown’s contract, Carroll sidestepped the question.

"We’re really ready to play football right now. That’s where we are," Carroll said. "Everything that needed to be taken care of is taken care of. Away we go."

Asked if there had been adjustments to Brown’s contract, Carroll sidestepped the question.

"We’re really ready to play football right now. That’s where we are," Carroll said. "Everything that needed to be taken care of is taken care of. Away we go."

Brown’s presence is vital for Seattle because there is no clear replacement plan. Jamarco Jones played the position during preseason when Brown was watching. Cedric Ogbuehi filled in last season at left tackle, but is currently on injured reserve because of a biceps injury.

Brown wasn’t the only veteran that returned to practice. Safety Quandre Diggs also practiced after briefly sitting out practice in the past week while having some future assurances settled. Diggs reportedly wanted an insurance policy against injury finalized before the start of the season, his final one under contract with Seattle.

Safety Ryan Neal was also back at practice after missing time during training camp because of an oblique injury.

NOTES: Carroll said TE Colby Parkinson (foot) and CB Tre Brown (knee) will not play in the opener. Carroll said for now neither need to be placed on injured reserve but will not be ready against Indianapolis. ... Carroll said after all the roster decisions and moves the team has two players on the roster and practice squad that have not received a COVID-19 vaccine. "I’ve been really pleased with everybody’s contribution," Carroll said. ... QB Russell Wilson (offense), LB Bobby Wagner (defense) and FB/LB Nick Bellore (special teams) were voted team captains.