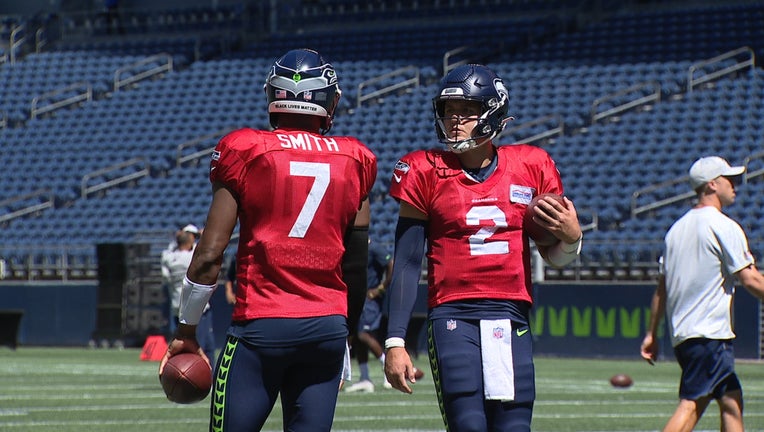 SEATTLE - The battle between Geno Smith and Drew Lock in the battle for the starting quarterback job for the Seattle Seahawks had its first big evaluation in the team's mock game scrimmage at Lumen Field on Saturday afternoon.

Head coach Pete Carroll called the scrimmage "a really big day" for the competition on Friday ahead of the practice and it provided an opportunity for both quarterbacks to get game-like reps under center.

"It looked like they threw the ball pretty well," Carroll said of the quarterback performances in the scrimmage. "The way it worked out, Drew had some more opportunities, but I thought that they threw the ball really nice in the controlled stuff and underneath. We were clean with the ball coming out, the protection was good early, so it will give us a good chance to see them. If you noticed that both guys got to work with the first O-line today and the first receivers, so it will be a nice chance to compare these guys"

Lock had the more impressive performance of the two overall on Saturday. Lock had only one series with the first-team offense, but that meant that he also went against Seattle's top defensive unit for most of the afternoon.

Lock had a third down conversion to Noah Fant on his opening drive and fit a tight-window throw into DK Metcalf to move into the red zone. Rookie Ken Walker capped off the drive with a 4-yard touchdown run during his only series with the No. 1 offense.

Back with the twos, Lock perfectly executed a run-pass option to find Colby Parkinson for a big gain over the middle. After a touchdown pass to Cody Thompson was waved off due to offensive pass interference, Lock managed to connect with Thompson for a 20-yard touchdown with a wee bit of luck involved. Rookie cornerback Tariq Woolen had great coverage on a fade throw to Thompson and deflected the pass away. However, the ball popped vertically into the air and Thompson managed to readjust and make a diving job of the falling ball for the score.

"I have a lot of faith in Cody," Lock said. "We got a lot of reps together, talking about throwing with him in Houston. Me and him taking some routes on air stuff. You know, I believe in him and I gave him a shot. How the ball falls is I guess with a little bit of luck there. It works out, I’m proud of him and I trust that guy."

Lock said he was really happy how he played in the first half of the scrimmage. He said that was close to the best version of himself.

"It was just really clean," he said. "When the guys got open, we took it, whether it was one in the read, two in the read, or three in the read. You know when you break the huddle, this play has a chance for a shot. You like the look pre-snap and we are going to take it, so I felt like there wasn’t anywhere I was like ‘You know what, I’m kind of half-and-half on this shot, so I’m going to take it.’ It was, ‘Alright, I’m 100% convicted on this and we are going to put the ball down field.’

"That’s where you want to be at and that’s the mindset that you want to have. Anytime it’s not that, then we’re not going to take the shot, we are going to work the play, and see where it takes us."

Smith had a good start to the scrimmage as well. He led the first-team offense on a lengthy scoring drive that was capped by a 1-yard Rashaad Penny touchdown run. Smith hit Metcalf on a pair of throws and a key third down conversion to Tyler Lockett as the drive marched downfield.

"I feel like we started out really well," Smith said. "I think the first two drives we had things moving. I thought we started pretty well. Then, I think we had a few mistakes here and there, and some of that’s to be expected. By the sixth day of camp, things are kind of piling up with the install, so, we have a few things that we have to clean up. But overall, I love the effort, I love the way guys competed."

"This is great film for us to watch, it’s a big measuring point for us," Carroll said. "Hopefully, we will see what we see. We didn’t come out very well of the second half of this game. The first half was pretty crisp, looked sharp, and there were a lot of good things. I thought that we got to throw the ball around the yard a lot. There were a lot of good looks for the quarterbacks and the receivers."

So how important will this film be for the quarterback battle?

"It depends on what it tells me, I don’t know that, but it’s really important to see where we’ve come," he said. "We handled the line of scrimmage well, I was back behind there so I could see what was going on with all of our checks, audibles, and things like that. We did that really well, so we’ve made a lot of progress, but now we need to see what it looks like on film. It might not tell us as much as I hope, but we will see."

Though Lock's throw turned into a touchdown, Carroll praised the play of Woolen as well. In addition to the play on Thompson, Woolen broke up a pass to Marquise Goodwin on the sidelines and nearly had a diving interception on another pass intended for Goodwin on a throw from Geno Smith.

"I think he was tipping the ball away and it was a really nice job of Cody coming down with the football, but it was a nicely defended play too," Carroll said. "He had a couple of challenges and almost had a pick down there too. This was really good work for him, he was out there with Quandre (Diggs) and Jamal (Adams) hollering at him and getting him lined up. It was a really profitable day for him."

"Honestly, I thought I did a good job," Woolen said of the touchdown. "It was still good coverage, but you’ve got to finish the play. I was thinking the ball may have went out of bounds. I was just looking for it and the next thing you know I turn around, and he’s lying on the ground like this with the ball and I was like ‘Oh wow’. It was just a good play though.

Defensive end L.J. Collier came out of the game after injuring his elbow early in the "fourth quarter" of the scrimmage. That was the only injury to come out of the scrimmage. However, linebacker Jordyn Brooks, cornerback Sidney Jones, wide receiver Dee Eskridge, safety Ryan Neal and linebacker Tyreke Smith were among those that didn't take part as they rest various injuries.