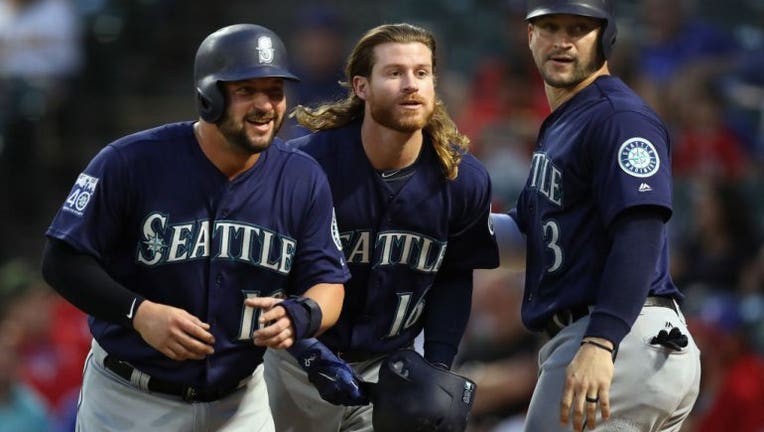 Ben Gamel #16 of the Seattle Mariners, center celebrates a three-run home run with Yonder Alonso #10, left and Mike Zunino #3 in the second inning against the Texas Rangers at Globe Life Park in Arlington on September 12, 2017 in Arlington, Texas. (P

Zunino broke a scoreless tie in the fifth with a rare shot into the second-level club deck in left field, and the Mariners went on to an 8-1 victory over the Texas Rangers on Wednesday night to hand Martin Perez his first loss in eight starts.

"There's always that urgency that sets in. Obviously, we're running out of time," Zunino said. "You want to come together and play as well as we can."

Jean Segura also homered for the Mariners (73-73), who went a half-game ahead of both the Rangers (72-73) and Kansas City (72-73). Seattle remained 3 1/2 games behind the second wild card spot held by Minnesota with the only team between them the Los Angeles Angels, who the Mariners play on the final weekend of the regular season.

"Guys have busted their tails all year to put themselves in this position, to play meaningful games," manager Scott Servais said. "We want to stay after it and be aggressive, and just see what happens."

Zunino hit a curveball about 470 feet for only the 23rd homer to reach that club level section in the ballpark that is in its 24th season. His second solo homer, his 23rd of the season, capped a five-run seventh-inning for the Mariners.

Three batters after Zunino's first homer, Segura hit a two-run shot deep into the lower level of seats in left.

Mike Leake (3-0) struck out five and allowed one run in 5 2/3 innings to win his third consecutive start for the Mariners since they acquired him from St. Louis on Aug. 30. The right-hander was 7-12 in 26 starts for the Cardinals this season.

Perez (12-11) had won seven consecutive starts since losing Aug. 4 at Minnesota, and missed the chance to match Kenny Rogers' franchise-record of eight wins in a row set in 2005. The lefty allowed three runs over 5 1/3 innings with five strikeouts and three walks.

"Two pitches. I threw one that was supposed to be outside to Zunino and it came in. To Segura, too," Perez said. "After that I did a great job, stayed in the game and trying to get out of the fifth inning and give the guys a chance to win."

Elvis Andrus hit a one-out double off the right-field wall in the Rangers sixth. He scored on a single by Robinson Chirinos that chased Leake before pinch-hitter Adrian Beltre's inning-ending flyout to shallow right-center.

"We need to play with a little bit more urgency," Andrus said. "We don't really have too many games left and we have to leave everything out there on the field every single day."

BELTRE'S BACK — SORT OF

Beltre, who this season joined the 3,000-hit club, appeared in a game for the first time since sustaining a left hamstring strain two weeks ago. The Rangers had said then that he'd be out at least four weeks, though the third baseman is still pretty much limited to pinch-hitting duties for now since he has only done some light jogging.

"I don't want to pass up the opportunity to have our best guy not be able to come up in a situation to change to game," manager Jeff Banister said. "I felt that it was the best opportunity for us to send him out there and take a swing at it."

Chirinos has reached base in 27 consecutive games, the longest active streak in the majors. ... With the Mariners infield drastically shifted in the third, Delino DeShields was caught stealing at second base on a 2-5 putout. Third baseman Kyle Seager took the throw at second and applied the tag on the close play that was upheld after a replay challenge.

Rangers: 1B Mike Napoli missed his fourth straight game with a stress reactor in his lower right leg that was confirmed after a second MRI. The Rangers said he is available to play, and Napoli said he "can go out there and deal with the pain."

Mariners: Felix Hernandez (5-4) is expected to come off the disabled list (right shoulder bursitis) and pitch for the first time since July 31, when he got a no-decision in his last start. That game was also in Texas, where he gave up four runs over 5 1/3 innings.