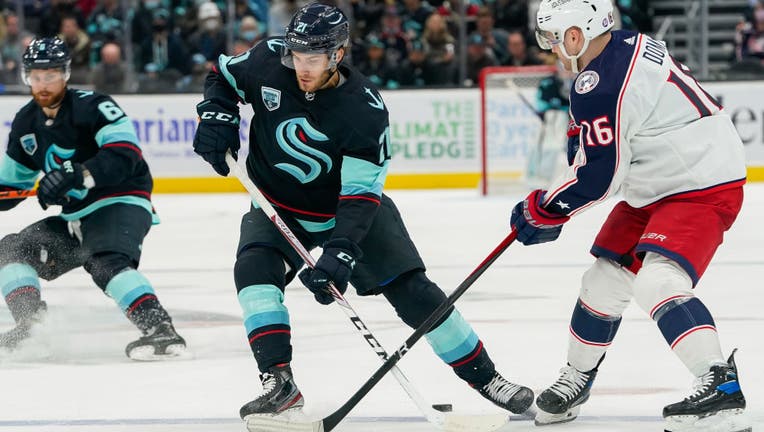 SEATTLE - Back in the summer, Jake Bean believed he would be selected in the NHL’s expansion draft and the next stop in his career was going to be in Seattle.

Bean instead ended up in Columbus, and made his first trip to Seattle as a member of the Blue Jackets memorable.

Max Domi had two goals and an assist, Bean scored 55 seconds into overtime and the Columbus Blue Jackets beat the Seattle Kraken 5-4 on Saturday night.

"To be honest, it was a pretty tough day for me and my family when I didn’t get taken," Bean said. "But once I got to Columbus, it’s been all Columbus and I haven’t really thought about it since."

Jack Roslovic and Oliver Bjorkstrand each had a goal and assist for the Blue Jackets, who won for the second time in eight games.

Elvis Merzlikins made 28 saves and the Blue Jackets withstood Seattle’s furious rally in the third period. Merzlikins also got a big assist from Bean in the first period when he covered an open net to block Jamie Oleksiak’s wraparound attempt.

"You got to give that team credit. They worked, they used the crowd to their advantage and found a way to get to overtime," Domi said. "We would like to finish it in regulation, but the two points is two points and we will take the win any way we can."

Seattle rallied with three goals in the third, capped by Vince Dunn’s wrist shot with 4:06 remaining to pull even at 4-all.

Seattle scored twice 22 seconds apart early in the third, with Jaden Schwartz deflecting Joonas Donskoi’s shot past Merzlikins at 3:41 and moments later Morgan Geekie snapped a wrist shot off a pass from Mason Appleton to pull Seattle within 4-3.

Jared McCann added his 11th of the season in the second period for Seattle. The Kraken earned a point, but lost their third straight.

Philipp Grubauer made 24 saves, but couldn’t get his blocker up in time to deflect Bean’s shot from the right circle in OT.

"The thing that our players can take a lot of pride is coming out in the third period and playing an outstanding period and earning one point," Seattle coach Dave Hakstol said. "At the end of the day that makes losing the the extra point not being able to finish it out in overtime a pretty hard pill for everybody to swallow."

Columbus scored four times in the second period to take a 4-1 lead. Bjorkstrand scored at 8:13 of the second, beating Grubauer with a wrist shot from the left circle. Three minutes later, Roslovic redirected Domi’s pass into the net for his fifth of the season.

Then it was Domi’s turn. His breakaway goal at 16:43 of the second gave the Blue Jackets a 3-1 lead, and he added a second score 2:51 later when Bjorkstrand’s shot slipped between Grubauer’s pads, and Domi was there to guide the puck into the net.

Domi had a three-point game for the third time this season.

Seattle placed forwards Yanni Gourde and Riley Sheahan, and assistant coach Jay Leach into the league’s COVID-19 protocol on Saturday morning. The trio joined forward Colin Blackwell, who was placed into the protocol on Wednesday.

Hakstol indicated the team learned of the positive tests on Saturday morning.

"We get the information in real time here and we got some new information this morning. So we want to make sure that we’re clear in our minds as to who is available for tonight’s game," Hakstol said after the morning skate. "It’s not ideal to have these types of changes on the morning of a game, but as you said it’s not new for anybody in the sports world right now."

Seattle recalled forward Alexander True from Charlotte of the AHL. True is the first former Seattle Thunderbirds player to debut for the Kraken.

NOTES: It was the first overtime game at Climate Pledge Arena. ... Seattle G Chris Driedger was activated off the injured list on Saturday and Joey Daccord was reassigned to Charlotte. ... Bjorkstrand picked up his 200th career point with Columbus. He’s the 11th player to record 200 points with the franchise. ... Seattle F Marcus Johansson appeared in his 700th career game. He’s the 11th active Swedish skater to reach 700 games.

Blue Jackets: Columbus is at Vancouver on Tuesday.

Kraken: Seattle is at San Jose on Tuesday.