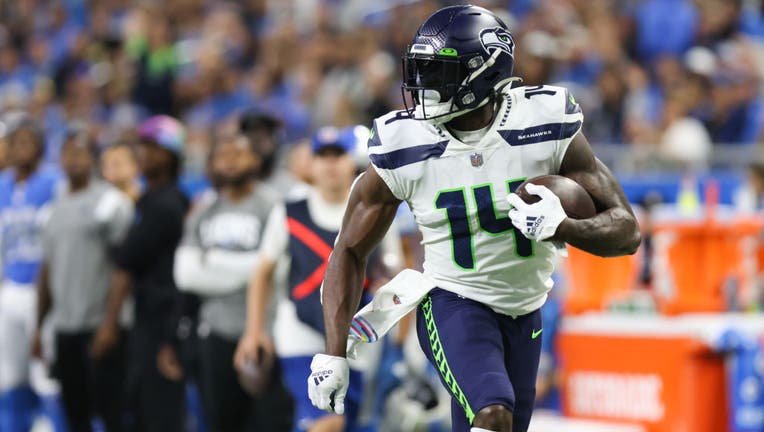 DETROIT, MI - OCTOBER 02: Seattle Seahawks wide receiver DK Metcalf (14) runs with the ball after catching a pass during the second quarter of an NFL football game between the Seattle Seahawks and the Detroit Lions on October 2, 2022 at Ford Field in

RENTON, Wash. - DK Metcalf and Tyler Lockett will both be game-time decisions for the Seattle Seahawks for this Sunday's game against the New York Giants.

Mecalf suffered a patella tendon injury in last week's game against the Los Angeles Chargers. He had been held out of practice until Friday when he got some limited work in. Meanwhile, Lockett had been dealing with a hamstring injury in the last couple of weeks, but had an oblique issue surface during practice on Thursday as well.

"DK did some stuff today. Tyler was quiet today. We held him back a little bit," head coach Pete Carroll said.

"[Lockett] feels a little bit of an oblique kind of something going on that he felt yesterday for the first time."

Lockett did not practice at all last week before playing against the Chargers, but the addition of an oblique injury is concerning.

For Metcalf, his ability to return to practice this week is a good sign for the long term even if he's unable to play this week.

"He ran around today and did some stuff and looked pretty good," Carroll said. "Just based on kind of the initial reaction to what happened and all that, we wouldn't have thought that possible. He was out there doing some stuff, so it was a good positive step today."

Linebacker Darrell Taylor got some limited work in on Friday as well despite a groin injury. He's also questionable to play.

"He got some work today, so he's working his way back in. We'll see how he is all the way until Sunday," Carroll said.

Defensive tackle Poona Ford injured his ankle in last week's game against the Chargers and is also questionable.

"Same with him, he got back in there and was able to do some stuff," Carroll said. "All of those guys that you're asking are really kind of in the same vein that we have to wait and see how they do, how they respond to the work today and all that, and we really won't know until Sunday. We don't need to know until Sunday."

Fullback Nick Bellore has been ruled out due to a concussion. Running back Travis Homer will be added back from the injured reserve list to bolster the special teams group in Bellore's absence.

"Fortunately T-Homer is coming back, and he has been just a centerpiece of our special teams for a long time," Carroll said. "It's a big boost to get him back. They play a little bit different roles, but we've been able to move some stuff around so we can get those guys to play and fortunately not just have a big spot there that we can't fill. Getting Homer back helps a bunch. We always miss Nick, he's a great player for us and a leader and all of that, but he's not going to make it this time."

Wide receiver Penny Hart is doubtful to play due to a hamstring injury, but Carroll said earlier this week that Hart would not play against the Giants.