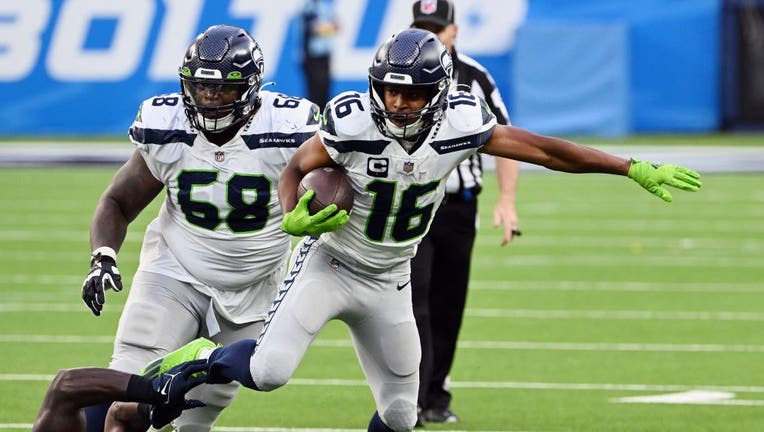 SEATTLE - Seattle Seahawks wide receivers DK Metcalf and Tyler Lockett are both active and will play against the New York Giants on Sunday afternoon.

Metcalf injured the patella tendon in his left knee last week against the Los Angeles Chargers. Meanwhile, Lockett had been nursing a hamstring injury and tweaked an oblique during practice on Thursday. However, both were able practice in limited fashion on Friday and will play against the Giants after going through pregame warmups.

Wide receiver Cade Johnson and linebacker Bruce Irvin were the two call-ups from the practice squad on Saturday. Johnson adds some additional depth to the group with Penny Hart also out due to a hamstring injury in case Metcalf or Lockett can't make it through the game.

Metcalf, Lockett, Johnson, Marquise Goodwin, Dee Eskrirdge, and Dareke Young will be the receivers in uniform against New York.

Guards Gabe Jackson (knee/hip) and Phil Haynes (concussion) are also active. Jackson missed the last two games. Haynes was pulled out of last Sunday's game against the Chargers by independent spotters with his concussion. He cleared protocol and is available to play against the Giants.

Hart, linebacker Nick Bellore (concussion) and cornerback Sidney Jones IV (groin) are the injured players that are inactive for the game against the Giants.

Running back Travis Homer is also back in the lineup after being activated from injured reserve on Saturday.