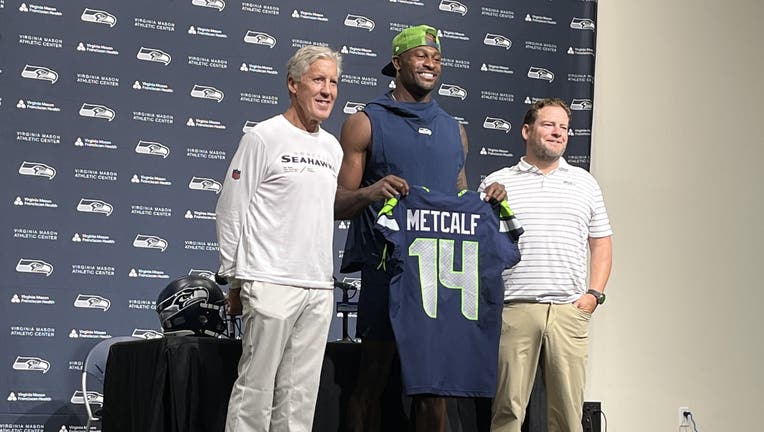 RENTON, Wash. - Seattle Seahawks wide receiver DK Metcalf got a bit emotional on Friday after signing a new three-year contract extension with the team. Metcalf said he fully wanted to be in Seattle moving forward and has his sights set on lofty goals ahead.

"Something was going to get done," Metcalf said. "It was going to be here because, as much as I bluffed to John [Schneider], I wasn't leaving. So I wanted to be here. I wanted to play here and I'm just glad that we got something done."

The Seahawks announced the new deal for Metcalf on Friday after multiple reports emerged after Thursday that Metcalf had agreed to a new extension with $72 million with a $30 million signing bonus.

Metcalf said he was all smiles yesterday when learning the deal was done and informing his family of his new contract. However, it took until Friday's press conference got underway for it to sink in what it meant for him and his family back home in Mississippi.

"Just coming from Oxford, Mississippi, all the way over here to Seattle is a long journey. I'm about to get emotional so bear with me," Metcalf said, taking a deep breathe trying to contain his emotions. "It really hasn't hit me until now. That I'll have the opportunity just to help so many people back home and help my family. And just thinking about when I broke my neck and I was told I wasn't going to be able to play football again. And now just this moment happening. It's just all a blessing."

Metcalf injured his neck while playing for Ole Miss in 2018. He sustained a cervical neck fracture while blocking on a kickoff return for Mississippi against Arkansas that October. The injury was significant enough that doctors told him he wouldn't be able to keep playing football.

"I cried because football was taken away from me at that moment," Metcalf said of the moment in 2020.

However, a second opinion told him the injury could be addressed surgically and he could resume his football career. Since then, Metcalf has exploded during his first three seasons in the NFL with Seattle. Metcalf has caught 216 passes for 3,170 yards and 29 touchdowns. The receptions and yards are the most ever in team history for a player over his first three seasons. The 29 receiving touchdowns are second to only Daryl Turner.

Metcalf ranks 10th among all receivers in yards and is tied for fifth in touchdowns since he was drafted in 2019. He's tied for ninth all-time in touchdown catches by a receiver over a player's first three seasons. Only Randy Moss (43), Jerry Rice (40), John Jefferson (36), Bob Hayes (35), Odell Beckham Jr. (35), Alyn Beals (34), Harlon Hill (32), and Turner have more receiving touchdowns from the wide receiver position over their first three years.

"This young man is cutting-edge performer in all ways. The way he applies himself, his expectations, the way he's willing to work. There is nothing that he is not willing to do to get to the best of his abilities and potential," head coach Pete Carroll said.

"He is an international star on the rise and because he's just so in tune for doing all that it takes to be that kind of a performer and I'm so thrilled that you're with us and you're doing it we're gonna get to do it together. It's very, very fortunate to see it."

The Seahawks drafted Metcalf with the final pick of the second round in the 2019 NFL Draft. Metcalf had been a standout performer during the pre-draft process with eye-popping numbers at the NFL Combine. However, Metcalf's college stats at Mississippi didn't seem to back up the size and athleticism that was on display in workouts. Metcalf was projected as a first round pick, only to slide to the back-end of the second round before Seattle pounced."

Why y'all wait this long?" a teary Metcalf said on the phone when the Seahawks drafted him.

"I just think it's marvelous that it's come through and now we're in good shape and ready to crank it up and go."

Metcalf said it was difficult for him to skip the team's mandatory mini-camp this summer and sit out the first two days of training camp as he awaited the completion of his new deal.

"I'd get calls from Tyler [Lockett] and Freddie [Swain] and they're telling me about practice. And I get to watch it. I want to be out there with them practicing," he said.

Not that the contract is behind him, Metcalf has his sights set on much more ahead.

"My goal is to make it to the Hall of Fame. So still not done," Metcalf said.

"I just thank every everybody because it took a village just for me to get here today and just a big thank you to everybody who helped me get to this point in my life. And I'm still not done and that chip hasn't gone anywhere."