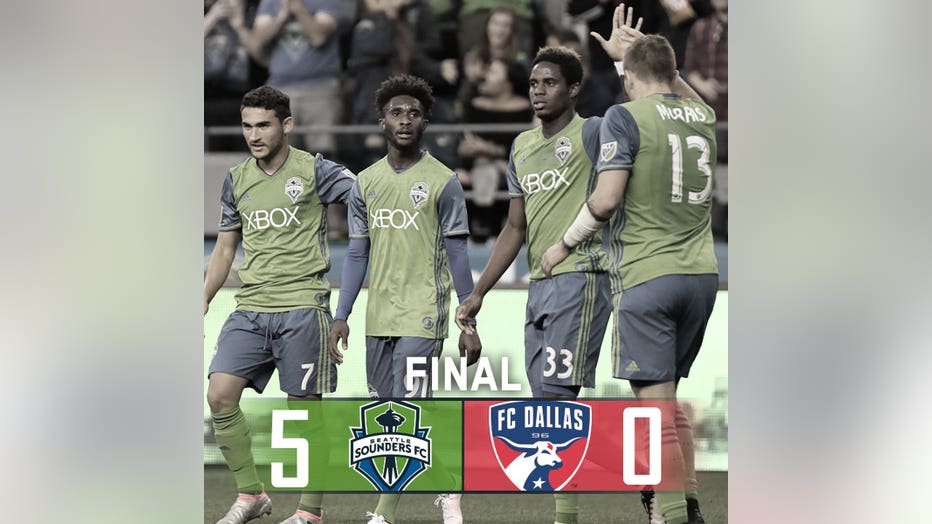 SEATTLE (AP) — Clint Dempsey, Andreas Ivanschitz and Jordan Morris scored during a 15-minute span of the first half and the Seattle Sounders routed MLS-leading FC Dallas 5-0 on Wednesday night to snap a four-game winless streak.

Joevin Jones and Cristian Roldan added second-half goals for the Sounders (6-10-2), who started the night with the lowest goal total in the league (14).

Dempsey scored in the 6th minute when he drilled a penalty kick past goalkeeper Chris Seitz for his third goal of the year. The PK was set up when defender Maynor Figueroa was called for an intentional hand ball just outside of the 6-yard box and shown the red card.

Seattle had not scored on its home field since a 2-0 victory against San Jose on May 7 — a drought of 277 minutes.

Ivanschitz increased the lead to 2-0 in the 18th minute with his third of the season, and Morris tallied his team-leading seventh just 4 minutes later. Jones scored in the 61st, followed by Roldan in the 73rd.

Seattle also finished with 10 men after Dempsey was sent off in the 34th minute.