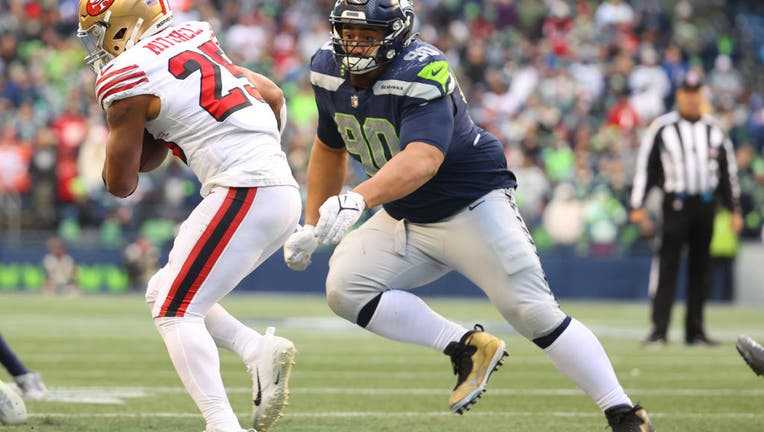 SEATTLE, WASHINGTON - DECEMBER 05: Eli Mitchell #25 of the San Francisco 49ers runs with the ball against Bryan Mone #90 of the Seattle Seahawks during the third quarter at Lumen Field on December 05, 2021 in Seattle, Washington. (Photo by Abbie Parr

Per Brady Henderson of ESPN.com, the deal is worth a total of $12 million with an additional $1.8 million being possible via incentives. The deal comes with a $1.5 million signing bonus.

Mone, 26, was already under contract for the upcoming season as the Seahawks tendered his as an exclusive rights free agent earlier this offseason. The extension keeps Mone in Seattle through the 2024 season. Mone would have been a restricted free agent after this year.

Mone, an undrafted free agent signing out of the University of Michigan, has appeared in 28 career games for Seattle with five starts coming last year. In playing a career-high 396 defensive snaps last season, Mone racked up 35 tackles and 1.5 sacks.

Mone is a space eater along Seattle's defensive line and frequently commands attention from multiple blockers, which allows other defenders the chance to make tackles.

The Seahawks also waived guard Pier-Olivier Lestage on Wednesday. Lestage was injured for most of his time with Seattle after signing as an undrafted free agent out of the University of Montreal.

Seattle has two open spots on their 90-man rosters after the release of Lestage and defensive end Alex Tchangam last week.