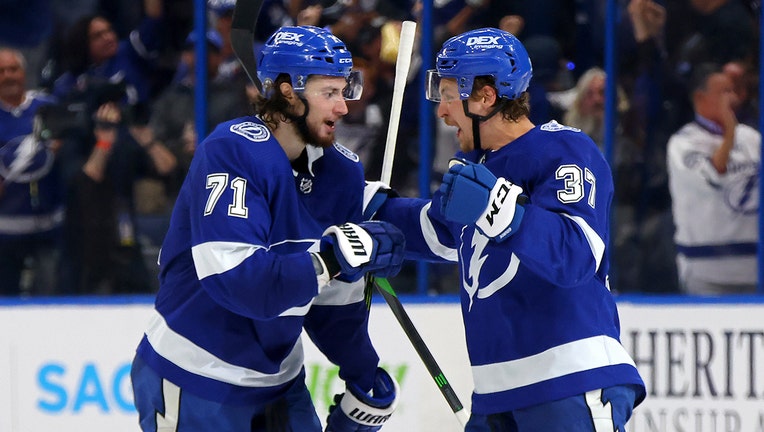 Yanni Gourde is congratulated by Anthony Cirelli after scoring what would be the only goal against the New York Islanders during Game 7 of the NHL Stanley Cup Semifinals on June 25, 2021 in Tampa, Florida. (Photo by Bruce Bennett/Getty Images)

TAMPA, Fla. - The Tampa Bay Lightning is headed back to the Stanley Cup Final. Andrei Vasilevskiy had 18 saves and Yanni Gaurde scored a short-handed goal to help the defending Stanley Cup Champions beat the New York Islanders 1-0 in Game 7 of their NHL playoff semifinal series on Friday night.

The Bolts advance to a Stanley Cup Final matchup against the surprising Montreal Canadiens, who upset the Vegas Golden Knights in the other semifinal. Game 1 is Monday night in Tampa.

Gourde beat Islanders goalie Semyon Varlamov off a pass from Anthony Cirelli at 1:49 of the second period. Vasilevskiy turned away seven shots in the final period to post his fifth career playoff shutout — fourth this postseason. It marked the first time in NHL history a Game 7 ended 1-0 with a short-handed goal.

Vasilevskiy, vying for his second Vezina Trophy in three years, also beat the Islanders 8-0 in Game 5 and shut out Florida and Carolina to clinch series wins over Panthers and Hurricanes in the first two rounds.

The Lightning improved to 14-0 in games following a playoff loss since beginning last year’s championship run. They also bounced back from losses to beat the Islanders in Games 2 and 5 and haven’t suffered consecutive playoff losses since being swept by Columbus in the first round in 2019.

The Islanders, who were aiming for their first Stanley Cup Final berth in 37 years, forced a winner-take-all showdown by rallying to win Game 6 on Anthony Beauvillier’s overtime goal.

Tampa Bay reached the Cup Final for the fourth time in franchise history despite not getting big nights offensively from playoff scoring leader Nikita Kucherov and Brayden Point, whose streak of consecutive games with at least one goal ended at nine — one shy of the NHL playoff record.

Kucherov played despite missing most of Game 6 with an injury. Point failed to score a goal for just the second time in the past 13 games.

Kucherov left Game 6 after a taking a hit to the lower back from Islanders defenseman Scott Mayfield. His status for Friday night was uncertain until just before faceoff. Lightning defenseman Erik Cernak also returned to the lineup after missing the previous two games.

The Islanders fell to 4-6 all-time in Game 7s, 4-5 on the road. It was first Game 7 the team has played in the semifinal round since facing Philadelphia in 1975. The Islanders were trying to earn their first Stanley Cup Final berth since 1984.

Point was trying to match Reggie Leach’s playoff record with goals in 10 consecutive games in the same postseason. Leach had a 10-game streak for the Philadelphia Flyers in 1976. With 14 goals in 18 games, Point has a chance to become the first player to lead the league in playoff goals in consecutive seasons since Jari Kurri in 1987 and 1988.