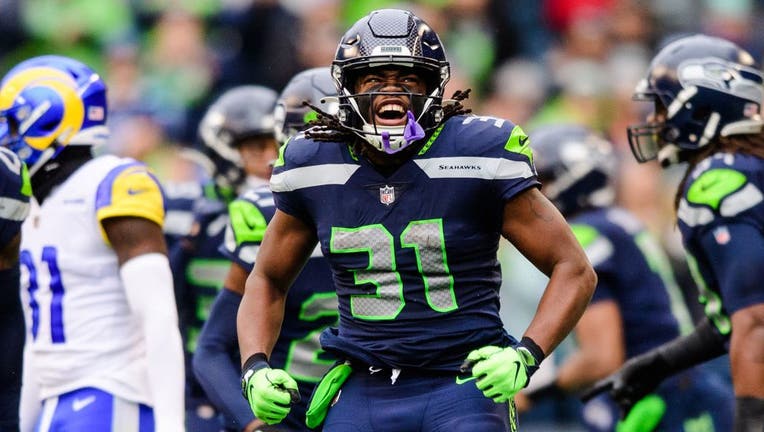 SEATTLE, WASHINGTON - JANUARY 08: DeeJay Dallas #31 of the Seattle Seahawks reacts after a play during the first quarter against the Los Angeles Rams at Lumen Field on January 08, 2023 in Seattle, Washington. (Photo by Jane Gershovich/Getty Images)

Running back DeeJay Dallas and defensive end Shelby Harris are both active for the Seattle Seahawks for today’s Wild Card playoff game against the San Francisco 49ers.

Dallas and Harris had both been designated as questionable to play. Dallas is still dealing with the long term effects of a high-ankle sprain and also injured his quadriceps in last week’s win over the Los Angeles Rams. Harris didn’t practice until Thursday due to a knee injury before getting limited work in. However, both were cleared to suit up in Santa Clara.

Right guard Phil Haynes and cornerback Xavier Crawford were unable to join them as both were scratched. Haynes is two weeks removed from a high-ankle sprain and did not practice this week. Crawford was also unable to go due to a hamstring strain.

Strong safety Ryan Neal is in the lineup after missing the last three games of the season with knee bursitis. He’ll return to his starting role alongside Quandre Diggs with Johnathan Abram and Teez Tabor still expected to rotate in.

Wide receiver Penny Hart, cornerback Artie Burns, linebackers Joshua Onujiogu and Vi Jones, and running back Tony Jones Jr. are healthy scratches for Seattle. Jones was signed off the practice squad on Friday as insurance in case Dallas was unable to play.

Linebacker Alexander Johnson and wide receiver Cade Johnson will both play after being elevated from the practice squad on Friday as well.