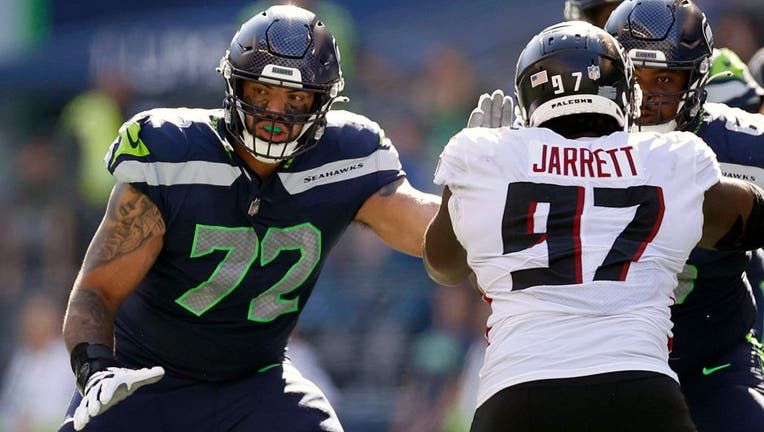 SEATTLE, WASHINGTON - SEPTEMBER 25: Abraham Lucas #72 of the Seattle Seahawks in action against the Atlanta Falcons during the second quarter at Lumen Field on September 25, 2022 in Seattle, Washington. (Photo by Steph Chambers/Getty Images)

RENTON, Wash. - The Seattle Seahawks have placed wide receiver Dee Eskridge on injured reserve due to a broken hand, and added right tackle Abe Lucas to the injury report as questionable to play against the Las Vegas Raiders on Sunday due to an illness.

Additionally, wide receiver Laquon Treadwell and linebacker Vi Jones have been elevated from the practice squad to play against the Raiders.

Lucas is the third player this week to appear on the injury report with an illness alongside defensive end L.J. Collier and running back DeeJay Dallas. If Lucas can't play, Jake Curhan would likely get the start at right tackle in Lucas' place with Stone Forsythe serving as the backup option.

The tackle spot will be key for the Seahawks on Sunday in facing off against Maxx Crosby and Chandler Jones. Lucas' absence would be a blow to the unit if he can't play.

Eskridge injured the hand in Seattle's 21-16 loss to the Tampa Bay Buccaneers in Munich, Germany two weeks ago. He had just two kickoff returns in the contest and was drilled on the hand by Buccaneers' cornerback Zyon McCollum.

"He's got a broken hand in some sort and as a catcher, can't do much about that," Carroll said of Eskridge on Friday.

Carroll said he was eager to get a chance to see Treadwell, who was signed to the team's practice squad on Nov. 1.

"Anxious to see what Treadwell does when he gets a chance. He hasn't had a shot to do much but we'll see how he fits in," Carroll said.

"He seems to be very well-equipped," Carroll said. "He seems like a pro. He runs his routes really crisply. He's really attentive about doing a number of things. He can play different positions for us. He's big catching the football. He looks like one of our guys and fits in very well."

Jones was called up from the practice squad for the game against the Buccaneers as well. He played 10 snaps on special teams in the first regular season game of his NFL career. He signed with Seattle as an undrafted free agent out of North Carolina State this spring.