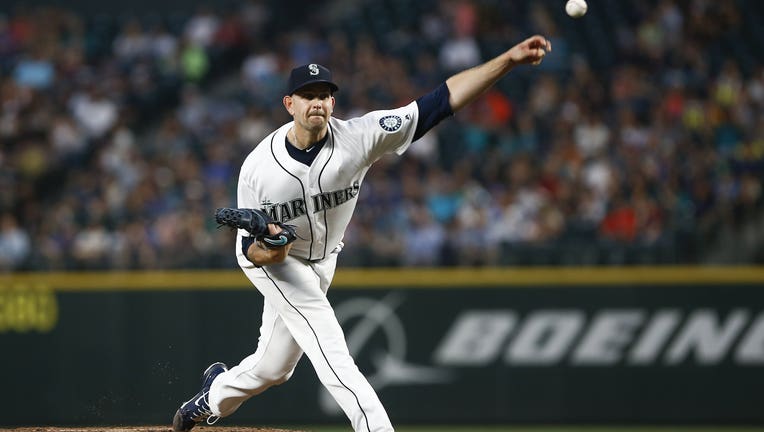 James Paxton #65 of the Seattle Mariners pitches in the seventh inning against the Houston Astros at Safeco Field on July 30, 2018 in Seattle, Washington. (Photo by Lindsey Wasson/Getty Images)

SEATTLE (AP) — James Paxton excelled in his return from the disabled list, Nelson Cruz had a two-run double in the sixth inning and the Seattle Mariners beat the Houston Astros 2-0 on Monday night.

Astros starter Gerrit Cole (10-3) carried a no-hitter into the sixth, but Jean Segura ended it with a two-out infield single. Two batters later, Cruz lined his double down the left-field line.

Cole was perfect through four innings while locked in a duel with Paxton (9-4), who was making his first start since leaving a July 12 game in Anaheim because of lower back inflammation.

Cole retired the first 12 batters he faced, striking out six, until he hit Cruz with a pitch leading off the fifth. After Segura's single, Denard Span hit a clean single to right-center, and Cruz hit a first-pitch slider inside third base. Segura scored easily, and the ball caromed off the protruding side wall, allowing Span to narrowly beat catcher Max Stassi's tag after a strong throw by left fielder Marwin Gonzalez.

Paxton was brilliant for Seattle, scattering three hits — two of them infield singles — over seven innings. He struck out eight, did not walk a batter, and threw 59 of his 82 pitches for strikes.

Mariners reliever Alex Colome covered the eighth and closer Edwin Diaz pitched the ninth for his 40th save. The Mariners improved to 63-43 and cut the lead of Houston (67-41) in the AL West to three games. 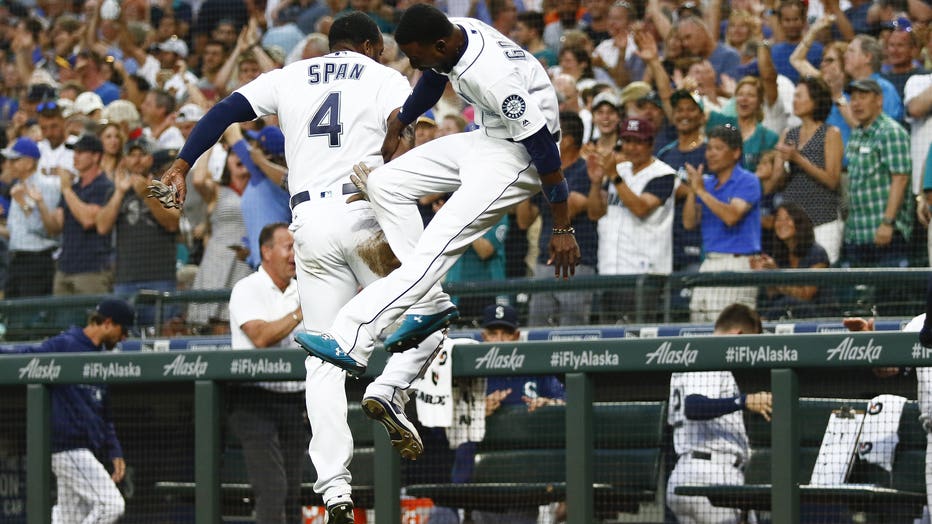 Amid speculation that Felix Hernandez's spot in Seattle's rotation could be in jeopardy, Mariners manager Scott Servais said he and general manager Jerry Dipoto have decided to keep the veteran right-hander in the five-man rotation for the time being. Hernandez is 8-9 with a 5.58 ERA.

"That could change, but as of now it's where we're at," Servais said. "We'll continue to talk about it. You just want to do what you can to give your club the best chance to win every time out."

Astros: SSCarlos Correa, who has been on the disabled list since June 26 (lower back soreness), hit off a high-velocity machine and said it went well. He expects to play in minor league rehab games soon. ... 2B Jose Altuve, on the DL with right knee soreness since July 26, is in Houston to attend to family matters and is slated to rejoin the team in Los Angeles over the weekend.

Mariners: 3B Kyle Seager went on paternity leave Monday, creating the roster spot for Paxton's return. Servais said Austin Romine would play third in Seager's absence, which could last another day or two. "He should enjoy the day with his family," Servais said of Seager. "I'll probably talk to Kyle tonight or tomorrow and see where he's at family-wise." ... The Mariners made one more move, calling up infielder Zach Vincej from Triple-A Tacoma and optioning first baseman Daniel Vogelbach.

Astros: RHP Charlie Morton (11-2, 2.89) gets the start for Houston on Tuesday. Morton beat the Mariners the only time he faced them this year on April 19 in Seattle, pitching seven scoreless innings and striking out eight while allowing three hits.

Mariners: RHP Mike Leake (8-6, 4.15), who starts for Seattle on Tuesday, has thrown seven or more innings in seven of his 21 starts this season, including three outings of eight innings.