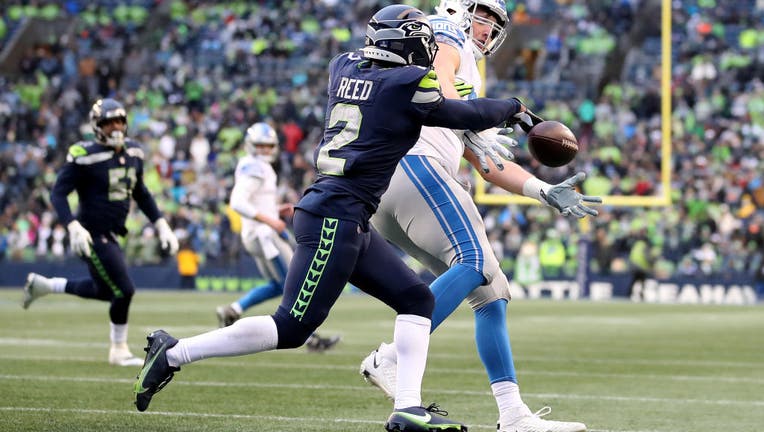 SEATTLE, WASHINGTON - JANUARY 02: Matt Nelson #67 of the Detroit Lions bobbles the ball while defended by D.J. Reed #2 of the Seattle Seahawks during the third quarter at Lumen Field on January 02, 2022 in Seattle, Washington. (Photo by Steph Chamber

Seattle Seahawks cornerback D.J. Reed is set to sign with the New York Jets in free agency, his representatives confirmed on Tuesday.

The agreement was first reported by Connor Hughes of The Athletic.

Reed's deal with the Jets is a three-year contract worth $33 million plus incentives, his agent told multiple reporters.

Reed, 25, has played the last two seasons for the Seahawks after being claimed off waivers from the San Francisco 49ers. Reed quickly earned a spot in the starting lineup once he recovered from a torn pectoral midway through the 2020 season. He started 22 games in two seasons for Seattle with 150 tackles and four interceptions.

At $11 million per year, Reed would become one of the top 20 highest-paid cornerback in the NFL. It would be the second straight offseason that Seattle's top cornerback has left in free agency. Shaquill Griffin signed a three-year, $40 million deal with the Jacksonville Jaguars last year.

The 49ers placed Reed on injury waivers in 2020 assuming he'd go unclaimed due to the pectoral injury. The waiver claim by Seattle proved to be one of the team's best roster moves of recent years.

Reed is the first Seattle starter to leave via free agency.

Offensive lineman Jamarco Jones reached an agreement with the Tennessee Titans on a two-year, $5.75 million deal on Monday, according to Adam Schefter of ESPN.com.

Jones, 25, has played in 36 games with seven starts for Seattle over the last three seasons. Jones played both tackle spots and guard during his time with the Seahawks.