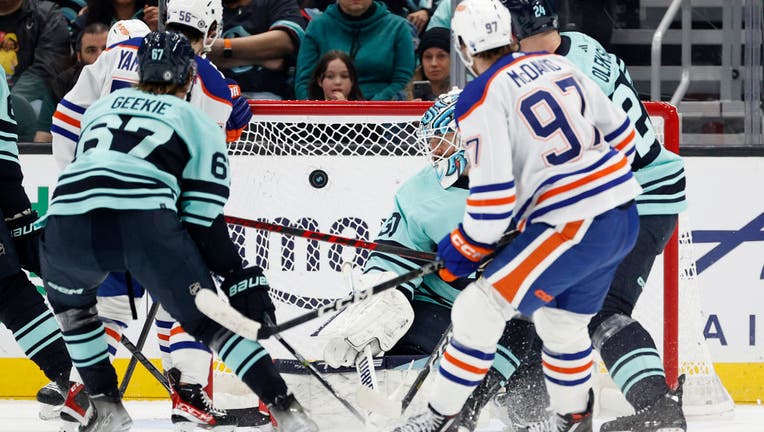 SEATTLE - Connor McDavid and the Edmonton Oilers bulldozed the Kraken with four goals in the first ten minutes of the game en route to a 7-2 Seattle loss on Friday night.

McDavid – the NHL's leading scorer – had a goal and four assists on the night as he moved 15 points clear of teammate Leon Draisaitl for the league's scoring lead. Draisaitl didn't even play against the Kraken due to an injury.

McDavid now has 72 points on the season. Draisaitl has 57 and Jason Robertson of the Dallas Stars is at 52.

"I think lately we haven’t been playing our best hockey and tonight was just a big slap in the face," forward Yanni Gourde said.

Philipp Grubauer was pulled after allowing three goals on five shots in the first four minutes of the game. However, the three goals scored were hardly Grubauer's fault. Zach Hyman was left unguarded on the back post for a power play goal that gave Edmonton the 1-0 lead. Klim Kostin was then left unmarked as Justin Schultz collapsed on McDavid. Kostin deked Grubauer to his backhand to beat him for a 2-0 lead.

With Vince Dunn crashing down in the offensive zone, the Oilers sprung a 3-on-2 break the opposite way with Darnell Nurse getting a clean look from the top of the circles and beating Grubauer blocker side to make it a 3-0 game.

In total, the three goals came in a span of just 1:11. Martin Jones replaced Grubauer in net after Nurse's goal only to have a similar fate come his way before the end of the period. McDavid backhanded a pass off the end boards to an unguarded Jesse Puljujärvi in front of Jones as he delivered the finish to make it 4-0.

"Our willingness to check tonight and to work without the puck was not close," Hakstol said. "You get to this time of year, especially against these good teams, teams that can go, you can't go out and score your way to a victory. That's what it looked like to me. We wanted to go out and create offense. Our group is a group that we're effective when we check to create offense and tonight we were on the wrong side of pucks. We were chasing from 200 feet, from 100 feet, off of 50-50 pucks, off or turnovers. That came back to burn us in a lot of cases."

The Kraken tried to up their intensity a bit in the second period as they laid more hits and checked harder. Dunn had a strong first shift with a pair of good defensive plays before he got into a fight with Dylan Holloway that ended with Dunn dropping Holloway with a right hook.

While Dunn and Holloway were in the box for fighting majors, Daniel Sprong got Seattle on the board early with a hard wrist shot that deflected off Stuart Skinner and into the net to make it a 4-1 game. The goal is Sprong's 11th of the season.

Brandon Tanev chipped a rebound of a shot from Adam Larsson by Skinner to make it a 6-2 game before the end of the second period. However, the Kraken were unable to get any closer.

McDavid then picked up a loose puck at the Seattle blue line and beat Jones between the legs to put an exclamation point on his night for Edmonton.

"He's the best player in the world for a reason," said Larsson, who was teammates previously with McDavid in Edmonton. "He's hard to stop. We can do a lot better job stopping him but when you give him time and space, he's going to make you look stupid most of the time."

Hakstol said he didn't address the team after the game. That will come during practice on Saturday.

The Kraken have lost consecutive home games to Pacific Division foes in the Oilers and Calgary Flames. They allowed the Vancouver Canucks to rally for two goals down for a 6-5 shootout win last week when Elias Pettersson also had a five-point night against Seattle. The Kraken face the New York Islanders at home on Sunday before a return meeting with the Oilers in Edmonton on Tuesday that begins a season-long seven-game road trip for Seattle.

For the first time since the opening weeks of the season, the Kraken are now outside the playoff picture in the Western Conference. They sit ninth in the conference with 40 points in 34 games played. Given they've played fewer games than other teams, they are still seventh in the conference in points percentage. However, Calgary and Edmonton are both teams that had been trying to catch Seattle in the playoff chase and the lost points to divisional rivals could prove critical down the line.

"We have a really deep team and we believe in what we're doing here and when we're on our toes and play four lines and six D, we know we can beat all the teams if we're on our toes, but tonight was one of those nights we're not proud of," Larsson said.